Home » Lifestyle » In the era of wall-to-wall dating apps, can you still find love offline?

In the era of wall-to-wall dating apps, can you still find love offline?

Every couple of months I’ll be inspired by an unattached friend who is joyfully dating with the help of an algorithm or a starry-eyed couple who met via the swipe of a thumb, and decide to give online dating another chance.

I’ll download the suggested app, create a profile, ask friends for advice on the pictures, and begin swiping. There will be matches, charming conversations, there might even be some dates or a season-long romance. 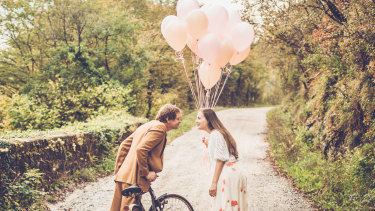 Tina Roth Eisenberg: “People are lonely and are so happy when someone takes charge and gets humans together.”Credit:Getty Images

More often, however, the online dating lull will set in just as it begins to feel like a game rather than a legitimate way to meet people. Conversations unexpectedly fizzle, sparks don’t translate in person, dates are cancelled, matches are neglected like a forgotten Tamagotchi.

Disenchanted, I’ll delete the app and decide to leave dating up to fate. A few months later, when the optimism around meeting people serendipitously begins to diminish, I’ll have an excited conversation with a friend about online dating and thus perpetuate the cycle of deleting, downloading, deleting and downloading.

I’m not alone in oscillating between optimism and being over it when it comes to online dating. In the case of heterosexual couples, a study conducted at Stanford University in the US found that in the last 10 years, online dating apps have displaced the roles of family and friends in bringing people together.

Just as many of us bypass travel agents and now book our own flights online, the rise of online dating has allowed single people to meet romantic partners without the intermediation of others.

Also, many of us know couples who met online, which helps in reducing any stigma. The ever-increasing number of users has also created a larger dating pool, allowing us to get outside the bubble in which we might be and meet people we’d otherwise never encounter.

For those who wish to meet someone but feel disheartened by online dating and don’t enjoy approaching stranger cold, tapping into networks of friends, close and not-so-close, could put love back in the air. But how do you do it?

A web of love

Despite being the founder of online network CreativeMornings, Tina Roth Eisenberg is an in-real-life enthusiast determined to help reverse the decline in meeting romantic partners through friends.
“When I was still married, I realised I was so busy being married and coupled that I didn’t pay attention to who was single in my circle of friends,” says Tina. “Now that I see just how hard it is to meet someone, I wish I’d helped my single friends by making more introductions.”

Now Tina aims to bring circles of friend together, tapping into what Tina calls the “web of love”.

“When you introduce two people you have deep admiration and respect for, they instantly connect on a heart level,” she says. “It’s what’s missing from the dating apps, where it takes so much emotional work to figure out if you can trust this person to begin with.”

Indeed, the Stanford University study reports that a vetting system is one benefit of meeting via friends of friends, and has been shown to enhance relationship quality and duration. From weddings to summer picnics, there is a multitude of gatherings from which a web of love can grow, but what they often lack is a steady supply of new attendees.

Writer Lorelei Vashti met her partner and father of her two children at a party she and her best friend set up for single pals and themselves.

We knew so many wonderful single women who wanted to meet someone and we could easily find 20 without blinking,” says Lorelei. “But we didn’t know the same number of men.

“We had a theory that everyone knows an amazing single guy – it could be a friend, could be a brother, a colleague, or even an ex. So we also invited 20 couples who were each responsible for bringing a single man.”

While this particular model was geared towards heterosexual singles, having a high ratio of couples to singles also meant there was less pressure and awkwardness than at a singles-only party.

“It took the edge off meeting someone, and also meant that everyone attending knew at least
one person,” says Lorelei. “We also held it on the night before New Year’s Eve so that everyone
was bringing a hopeful energy.”

Tina is also in favour of the secret-single model. For the last few months she has been asking friends for the name, email address and a short bio of a single friend they love, adding them to an ever-growing secret list of wonderful singles.

Working with two collaborators, Tina then invites a selection of the singles to small gatherings called Stoop Stories, where everyone is asked to relate an anecdote about their best or worst date.

“We’ve had one so far and it was an absolutely delightful event,” says Tina. “We are not labelling them as singles events, we just tell guests in the beginning that we all have one thing in common and they’ll figure out by the end of the night what that is.”

Tina’s advice to others wanting to throw a secret-singles event is not to over-think it. “Start the community you want to be part of,” she says. “Invite a few people in. Keep it light. Keep it simple. People are lonely and are so happy when someone takes charge and gets humans together.”

Being a good matchmaker isn’t so much about playing Cupid and calculating compatibilities as it is about enhancing opportunities for your friends to meet new friends.

After several years of being in a couple, Lorelei decided to reignite her passion for pairing up people
and started collecting contacts to introduce by email, but soon found the process unpredictable.

“I have learnt that you can’t just put two single people together,” she says. “It is more of a subtle
art than a science, which makes it difficult. Much of the time, people don’t really know what they want.

Nor can you make assumptions about someone’s ‘type’.” Case in point is Frances Tuck, who met her husband through friends of friends at a wedding. Their relationship came as a surprise to people who knew them both.

“We have a 14-year age gap and at the time lived in different states,” she says. “I think our mutual friends really didn’t see it coming, and it was a great lesson for me as a keen matchmaker for my friends – it’s impossible to know what another person will find attractive or off-putting.”

Frances recalls how isolating being the only single person in a group of friends can be, and now makes an special effort to make introductions and get people together. “I have a bunch of magnificent single friends and I’m keeping an eye out for them – I literally ask most guys I meet who seem lovely and aren’t wearing a wedding ring if they’re single.”

Frances is especially conscious of how stressed, tired and time-poor people are, and how that can make it difficult to meet someone. “It’s important to be aware and invested in the happiness of those we love,” she says. “I can distinctly remember what it was like to be single and how hard it was, so I want to be the friend I really needed back then.”

Whether it’s a singles party or matchmaking, whether you’re single, looking or coupled, the key is about being alive to connection.

“Perhaps the most magical part of our secret-singles party was all the friendship connections that popped up the next day on Facebook as people extended their circle of familiarity,” recalls Lorelei.

Even if you don’t meet “the one” at a party, tapping into your web of love enhances wellbeing by creating more of what sociologist Mark Granovetter calls “weak ties.” These are low-stakes relationships, the kind of connections that have been shown to enhance job prospects, create a sense of belonging and make our daily lives brighter.

We might easily dismiss brief interactions with our barista or brush off a pleasant conversation with someone who isn’t our type because we are fixated on finding “the one”. But it’s these everyday connections that contribute to our happiness and broaden our possibilities of meeting new people.

And isn’t that what we are looking for? Coupled or single, we are all searching for something beyond the screen, something that widens our circle and makes novelty worth celebrating – not deleting.

This article appears in Sunday Life magazine within the Sun-Herald and the Sunday Age on sale December 8.

3 Risk-Taking Zodiac Signs Who Are Bold In Life & Love