Home » Lifestyle » Industrial fashion reinvents the wheel. And the X-ray.

Industrial fashion reinvents the wheel. And the X-ray.

Designer Lizz Lethlean was emptying a bin of old X-rays when inspiration struck.

Lethlean, a 30-year veteran of Melbourne's theatre scene, was working in her part-time job at her local library in Williamstown, whose recycling bin takes all sorts of returns. 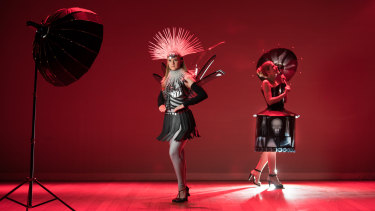 "I just got bitten by the idea of making something from these X-rays," she says. "They're the very bones of us. A little secret peek inside someone's body."

So she made a dress that will feature among many other exotic creations at Industrial Fashion, the opening event of the Art & Industry Festival on Friday – this year being streamed online thanks to the pandemic. 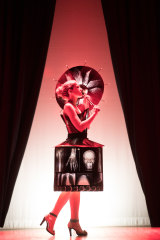 Twelve designers, established and emerging, have pushed the boundaries of what fashion is made of, taking inspiration from local industries in Melbourne's old manufacturing heartland.

Artistic director Donna Jackson says the empty warehouses and lost factories of the area have left the city a challenge: not to forget and abandon, but to use our past to build our future.

"How do we want to interact with these spaces?" she says. It requires creativity and imagination – a challenge perfect for artists.

She took one of the designers, leading costume jewellery maker Anna Kolusniewski, down to the old Altona Toyota factory that stopped the production lines in 2017, leaving a collection of car parts without a purpose. "Anna found these Toyota rubber mats, brand new, left over from the Toyota Fortuner," Jackson says. "[Toyota representatives] couldn't believe how excited she was. We grabbed them and started loading them into my car. It was like Christmas for Anna and the Toyota people were going 'really?'"

Really. Cut and riveted, they transformed into high fashion. "It's not just a wild outfit, it tells a story of the history of the area, of the local people who worked there," says Jackson.

Lethlean says she'll miss the live event and that special connection between artist and audience − the gasp and thrill of another astonishing outfit appearing on the catwalk.

But she loves her creation. She loved hearing the stories behind the X-rays provided by friends and colleagues. She loved standing over her lightbox, admiring the texture of bone, finding all the weird things we have inside us: bolts in hips, plates in arms, an electronic trigger treating MS in the depths of the brain.

"On the outside we may look hot stuff," she says. "Inside, there's machinery, and the memory of pain."

Britain's first transgender parents planning on having another baby