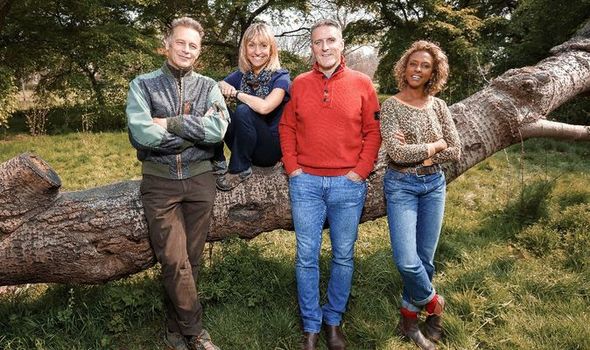 Viewing figures for BBC Two’s seasonal series along with Springwatch showed bumper increases on 2019. Autumnwatch was seen by an average of 2.2 million per episode earlier this month, up 22 percent on last year, while Springwatch had 2.62 million viewers, a 40 percent rise. Co-host Michaela said: “A friend told me she could not believe how many people had told her how brilliant Autumnwatch was for stress levels in lockdown. It’s a feel-good programme like Strictly.

“And, because it’s live, it reflects the mood of the nation. We needed it more than ever this year. Lockdown has given people an appreciation of their local wildlife.

“The number who got involved with gardening or feeding the birds is more than ever before.

“When I was in London I couldn’t believe the number of people in the parks. This will make a huge difference going forward because so many people will want to keep these open spaces.”

Video content from Springwatch at Whitsun was seen by a remarkable 22 million Facebook users. And posts about Autumnwatch rose sevenfold from 135,000 in 2019 to one million. Live films, including webcams of red squirrels and otters, were seen by 9.6 million compared with 2019’s 1.8 million.

The boom in social media suggests young people in particular see nature as an escape.

Michaela, who missed Springwatch due to being in lockdown at home in South Africa, is now back in Cape Town.

The 54-year-old who presents the show with Chris Packham, Iolo Williams and Gillian Burke, wanted to ensure Autumnwatch was uplifting by not dwelling on the sadder side of nature. She spent two weeks on Scotland’s east coast, focusing on a seal colony on the Isle of May.

“We decided if there was a starving seal pup that lost its mother we would mention it but not go into detail,” she said. “We do inspire people to see nature for themselves. Our programme makes people feel empowered to do something on their doorstep.”