No one would deny, not even the cast, that the timeline of Westworld Season 2 is already pretty confusing, but a recently released HBO photo from the series is definitely not. Turns out, the Westworld Season 2 photo reveals that Dolores and Maeve will reunite and it’s bound to make fans feel good. Yes, Dolores and Maeve have been spotted together in the same timeline, but it’s unclear what this meeting of the minds is about.

In an official HBO photo from Episode 2, aptly titled "Reunion," Dolores (Evan Rachel Wood) and Maeve (Thandie Newton) have come face-to-face. Dolores is in her prairie garb, a gun slung around her hip, and it’s clear she’s still on her mission to take out anyone in Westworld who gets in her way, while Maeve looks as if she just stepped out of the real world. Fires burn all around them, yet these two are focused on one another. Look close and you’ll notice Teddy (James Marsden) has his gun locked and loaded should this meeting go sour. The question now is, why?

Dolores and Maeve had previously met, albeit briefly, in the first season in Sweetwater, but as Entertainment Weekly points out, that was before either of them was cognizant of the fact that they weren’t human. The two have come a long way from being the damsel in distress (Dolores) and a frustrated madam (Maeve). Now, that they both know they’re androids and each have their own missions to get out of this place, the question becomes will these two team up or become enemies? 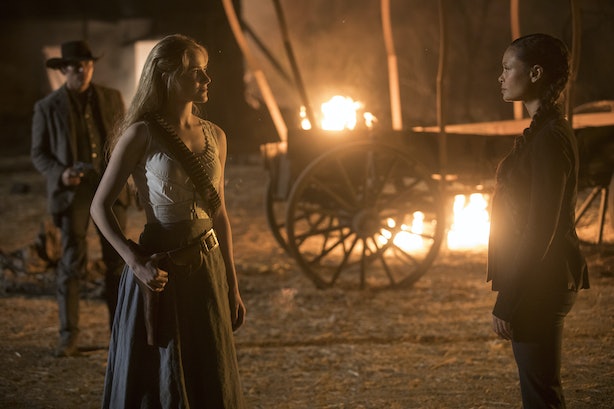 Unfortunately, this photo can’t answer that question and neither does a teaser for Westworld’s upcoming season. In the clip, Dolores and Maeve seem to be going their separate ways. A chicly dressed Dolores reunites with a heartbroken William (Jimmi Simpson) who wants to share some secrets with her and perhaps one of the new worlds. While Maeve shows up in Westworld‘s newest locale Shogun World, likely looking for her daughter, who was last seen being killed by the Man in Black.

What we do know, thanks to a tweet from Woods, is that Episode 2 is one of her favorite episodes and the fact that it has her teaming up with Newton doesn’t feel like a coincidence. It feels like something big is going to happen, something that could affect the rest of the season.

The photo of Dolores and Maeve could be hinting at a pivotal scene, but, it’s clear, HBO isn’t going to share any spoilers that could ruin this reunion. It’s possible, though, that recent tweets between Wood and Newton are the real clues that Dolores and Maeve will be sharing more screen time in later episodes.

On April 17, Newton tweeted that Wood’s work on Westworld Season 2 "is out of sight. So proud of you and in awe of your power and humanity. You know where to kick it girl." In response Wood tweeted, "SAME! you are a warrior. Wait till you see what @thandienewton does [in] season 2. I am speechless."

Being that Westworld is pretty secretive about its spoilers, it’s unlikely these two would know what the other was up to on the set unless they were filming together. Another clue that Dolores and Maeve are destined to meet again. Especially since the two actors, along with the show’s co-creator Lisa Joy, have already teased that Season 2 will be all about Westworld‘s female characters coming into their own and perhaps, coming together.

As Wood explained in an interview with Time, “Women are conditioned to be separate, to be pitted against each other. That’s conditioning. And that keeps us powerless.” If this show is all about female power, than it stands to reason that this scene between Maeve and Dolores could lead to an alliance that empowers them both. And it could even lead to even more scenes where Wood and Newton share the screen.