A RARE Battle of Hastings 50p coins has sold for a huge £63,100 on eBay after a price war among collectors. 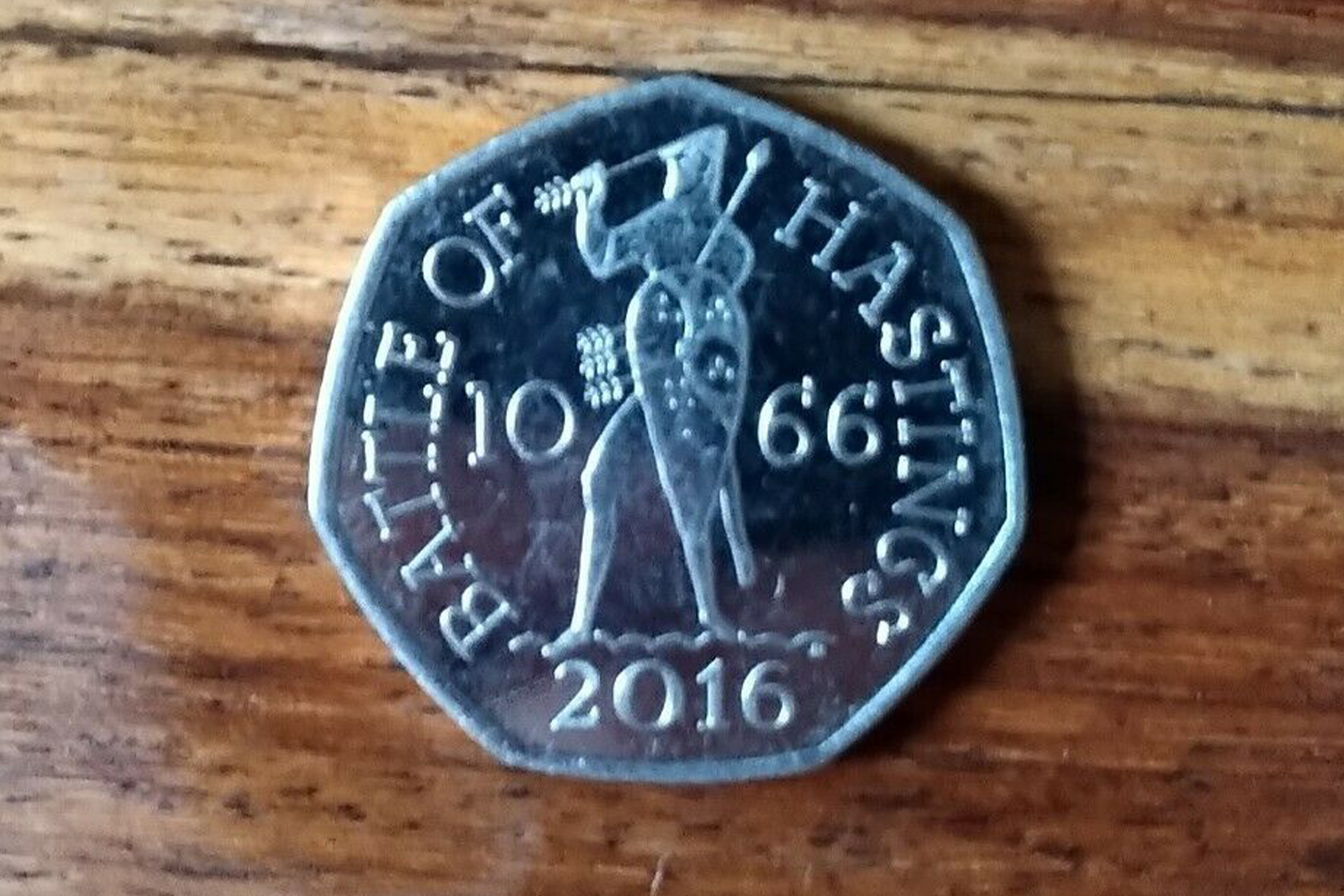 The 50p coins were struck back in 2016 to mark 950 years since the famous battle between King Harold II of England and William the Condqueror in 1066.

The back of the coin features the drawing of King Harold with an arrow through his eye, taken from the Bayeux Tapestry.

With more than six million in circulation, they're not the rarest out there – the Kew Gardens coin still holds this title with just 210,000 in circulation.

But they are harder to come by than most – for example, there are more than 17million Dictionary 50p coins in circulation and they're also considered to be rare. 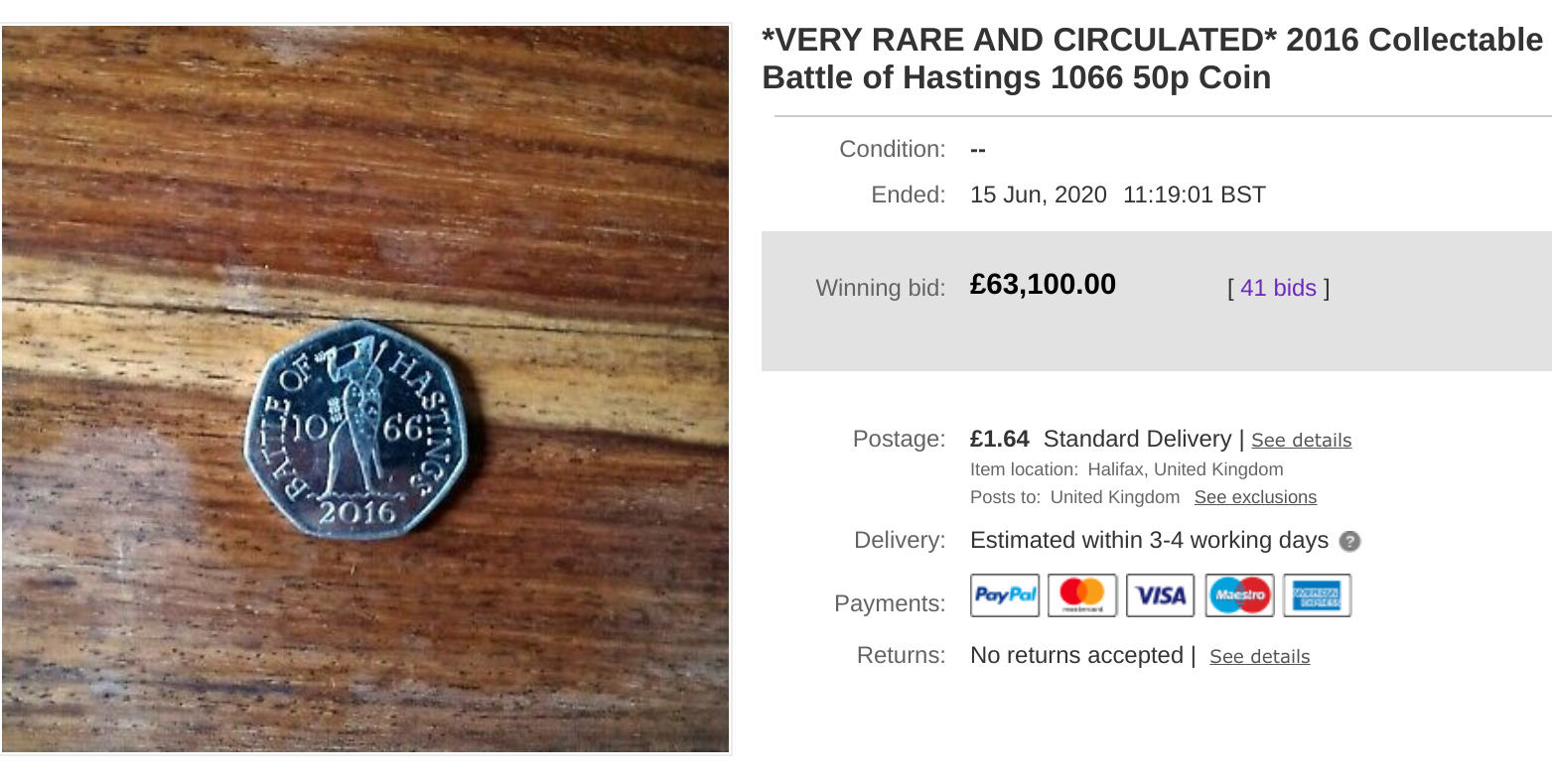 What to do if you've got a rare coin

FIRSTLY, you need to make sure the coin is legit and not counterfeit. The Royal Mint is unable to value a coin but it can confirm whether it is real or not.

They will usually supply you with a letter to confirm this. Once you’ve found out whether the coin is real or not, you have a number of options – either selling it through a coin dealer, at auction or on eBay.

If you want to sell the coin you’ve found in your spare change on eBay then you need to know the risks.

Remember to set a minimum price that is higher or at the very least equal to the face value of the coin.

Even if your coin “sells” on eBay for a high price there’s no guarantee that the buyer will cough out.

In its terms and conditions, the auction website states that bidders enter a “legally binding contract to purchase an item”, but there’s no way to enforce this rule in reality.

For more information about what to do if you've found a rare coin, read our guide.

It ranks at two on Change Checker's scarcity index scale, alongside Paddington Bear at the Station and Roger Bannister 50p coins.

Coins often sell for more if they've not been circulated but this particular one had been, with the seller making this very clear in the eBay listing.

While they didn't specify that there was any damage to the coin, you can see from the photos supplied that there were a few scratches.

By the time the auction ended, the coin had received 41 bids.

Of course, even if one of these coins turns up in your change and you decide to list it online, it's not guaranteed to sell for the same price – it's only worth as much as someone will pay for it.

CoinHunter puts this coin to be worth around £12.99, while other Battle of Hastings 50ps have sold for between £3 and £10.

If you think you have a valuable coin, the best thing to do is ask the Royal Mint to check that it's real – you'd be surprised about how many ingenuous ones are out there with one in every four old £1 coins thought to be fake.

While it won't be able to tell you how valuable it is, it can provide you with a letter to confirm its authenticity.

To find out how much it's worth, you should compare it to other similar coins that have recently sold on eBay to get a rough idea.

You can do this by clicking on the "advance search" button on eBay and checking the "sold listings" box.

Sometimes, specialist auction houses, such as Spink & Son, are also happy to give a free valuation.

Remember though, if you do sell it yourself online you'll need to take into account any listing and postage charges that will eat into your profits.

Women reveal why they stopped being attracted to their boyfriend