In shutting down London’s West End, Coronavirus is winning where Adolf Hitler and the IRA failed, writes SIMON CALLOW

Last Friday morning I was in a studio on 42nd Street, in the heart of Broadway, rehearsing a new musical featuring Britney Spears’s back catalogue. We were due to open in Chicago in two weeks.

But at lunchtime one of the producers slipped into the room and, with her lip trembling, told us that she was closing down the show.

Broadway had fallen dark the night before; now Chicago theatres were following suit. Everyone got rather tearful for a minute, then it was all over. 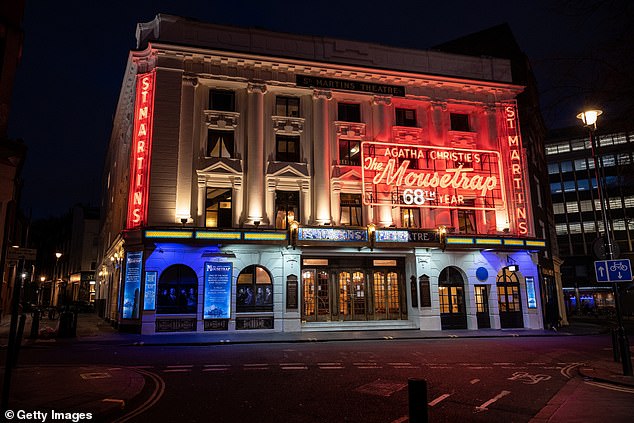 Walking past the Broadway theatre was uncanny – all the lights blazing, but not a single soul on the pavement or in the foyer.

The next day, Saturday, I was back in the West End of London where anticipation and excitement visibly filled the air as a huge queue snaked down the side of Wyndham’s Theatre for Leopoldstadt, the new Tom Stoppard play. Around the corner, at the Noel Coward, a bulging crowd surged into Dear Evan Hansen.

I was not to know that it would be the last Saturday night throng the West End could possibly see for months.

Battle of Britain spirit, I thought at the time, admiringly.

And how fitting: it was in this very theatre that in the dying days of the Second World War, Laurence Olivier and Ralph Richardson led the Old Vic Theatre Company, bombed out of its own home in Waterloo, in Oedipus Rex, Richard III and Henry IV Parts I and II. London in 1944 was plagued with flying bombs. Actors and audiences needed nerves of steel to give themselves over to the theatre. But they did.

Nobody who was there in those dark days has ever forgotten the experience. The Old Vic company lit a beacon and that light spread across the country and the world.

And more recently, in my working lifetime, we endured the IRA mainland bombing campaign, with guardsmen and horses being blown up in London.

Theatres stayed open. People needed them more than ever at that time of crisis.

But by Monday night, it was clear the enemy this time was of a different order, that the theatres themselves might be death-traps for actors and audiences, to say nothing of the ushers, crew and lighting operators.

The very raison d’etre of the theatre – citizens gathering to share experiences, to hear the stories of the tribe, to celebrate our common human capacity for joy and sheer madcap silliness – now posed a threat to their lives.

And so the Society of London Theatre has decreed that theatres will close until further notice.

The capital’s stages have fallen silent for the first time since Oliver Cromwell shut London’s theatres over 350 years ago. One of Britain’s proudest and best contributions to civilised life is no longer useful. And I and all of my colleagues are redundant.

During past crises, the first thing we did was to offer our services, to rig up a temporary stage, to go on the road. We can’t do that today, nor tomorrow, nor at any time in the near future.

Major cinema chains have also shut their doors, while film and television production has similarly ground to a halt.

Of course, sooner or later, scientists will conquer Covid-19. And until that happens, theatregoers can find some solace in the DVDs and recordings of countless dazzling productions available online.

But meanwhile, the West End and theatres across Europe and far beyond remain eerily silent.

We can only hope that when the lights do go back on, we’ll know what we have been missing and treasure it even more.