Australians gorged their way through the coronavirus lockdown on sourdough, potato chips and home-made soy lattes but cut their intake of lamb's brains, tripe and black pudding.

Data on our food buying habits compiled by the Australian Bureau of Statistics shows the country bought 550,000 extra tonnes of food and drink in 2019-20 compared to the year before; the equivalent of 10 Sydney Harbour Bridges. 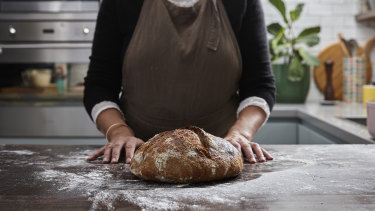 Sales of flour increased more than 15 per cent this year as we took to our kitchens to make sourdough.Credit:Jennifer Soo

The bureau reported the apparent consumption of food — which does not include restaurant food or produce grown in our backyards — increased by 4 per cent from 2018-19 to last financial year.

With restaurants, cafes and pubs heavily restricted due to the pandemic and many Australians working from home, our food buying habits changed sharply.

Despite the restrictions put in place by supermarkets, sales of flour jumped by 15.5 per cent to more than 315,000 tonnes while bread makers increased their purchases of yeast by more than 6 per cent.

We bought more berries (up 9.2 per cent) while drought and fire reduced the supply of apples, pears and stone fruits, which all suffered a fall in purchases.

Of the 550,000 extra tonnes of food and drink bought in the year, almost 40 per cent was on so-called discretionary foods.

Unable to go to our local cafe for a caffeine fix, purchases of tea and coffee increased. But not by as much as "dairy milk substitutes" such as soy and almond milk. Sales of these types of products jumped by almost 16 per cent but despite the increase, dairy milk sales are still 10 times that of non-dairy milk.

"That increase can be attributed to the surge in food retailing associated with the COVID-19 related restrictions, particularly in March, but also in April through to June 2020 as consumers relied more on supermarkets and less on dining out," he said.

Mr Atyeo said there was a potential nutritional impact from all the extra sales, with the average daily amount of energy jumping 32 per cent to 11,403 kilojoules per person.

He cautioned that much of this may have been due to stocking-up household pantries rather than driving immediate consumption.

Consumers appeared to use the year to try one of the growing varieties of plant-based foods. Meat substitute purchases jumped by 22.3 per cent over the year, albeit remaining a very small sector.

While we bought 13,700 tonnes of meat substitutes, we also purchased 1.3 million tonnes of beef, lamb, pork and chicken products.

Yet we turned up our nose to offal products such as lamb's fry and black pudding, with sales slipping by more than 9 per cent.

Our consumption of sodium lifted by 5.4 per cent, in part to all the snacks purchased through the year.

We lifted our consumption of soft drinks, fruit juices and cordials, and sports drinks also increased even though exercise times were limited for many people. But bottled water purchases fell.