No wonder the WAGs love it! Luxury DOG hotel in Merseyside boasts memory foam mattresses, a pool and SPA treatments – and it’s already a hit with footballers’ pampered pets

Love Ur Dog in Prenton, Merseyside, is the brainchild of power boat racer Scott Williams, who said he was inspired to launch his family-run business by his own dogs, as he found it upsetting leaving them in kennels while travelling.

Instead the 42-year-old entrepreneur, who runs the hotel with his wife Michelle, 39, and son Dale Williams, 21, aims to provide pooches with all the creature comforts they have at home – and then some.

And while the boutique hotel only opened its doors two weeks ago, it is already proving so popular that Scott – who said his customers include local footballers – said he has already accepted bookings for 2020.

Prices go up to £45 per night for a ‘penthouse’ suite for your pooch.

Scott said: ‘I travel a lot with my power boat racing and it’s always so hard finding somewhere for the dogs to stay. 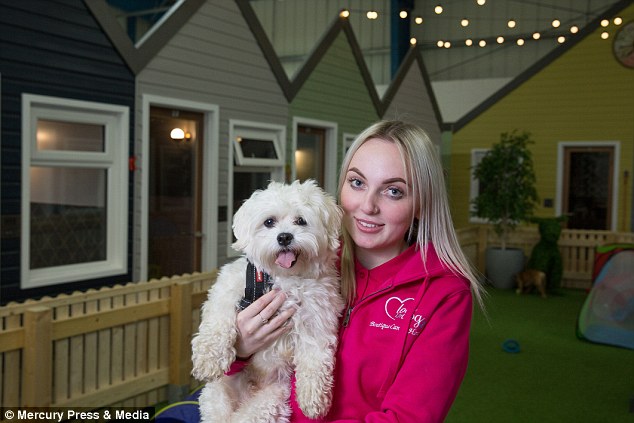 A hotel guest with Beth, one of the concierge team at the dog hotel. Love Ur Dog in Prenton, Merseyside, is so lavish it boasts brand new Range Rovers, a swimming pool and a chef 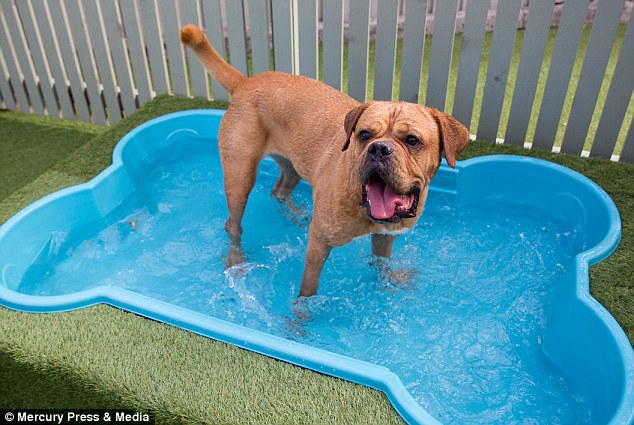 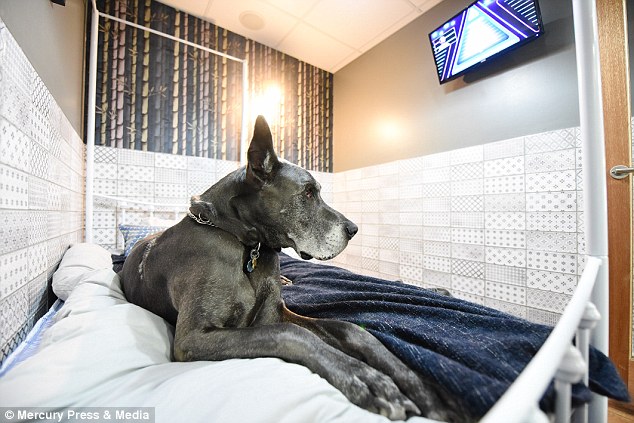 Scott said: ‘I travel a lot with my power boat racing and it’s always so hard finding somewhere for the dogs to stay.

‘The kennels around here are lovely but they’re just kennels at the end of the day. It’s a concrete box where our dogs at home are used to sleeping on the bed and watching tele.

‘I wanted them to be able to go somewhere they’d have all the comforts they have at home but there was nowhere like that. That’s what brought on the thought of the hotel.’

He bought the building and did it up setting him back by £1million. 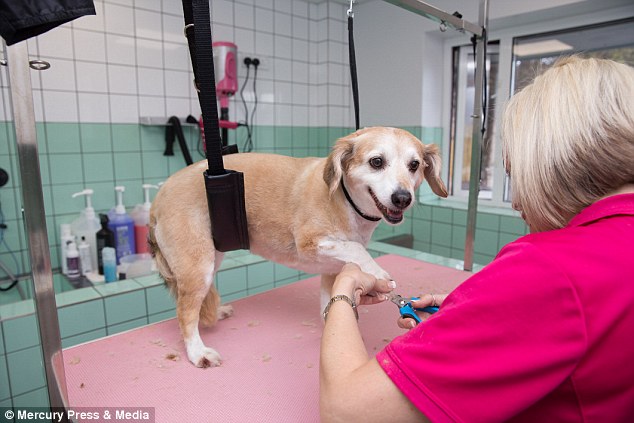 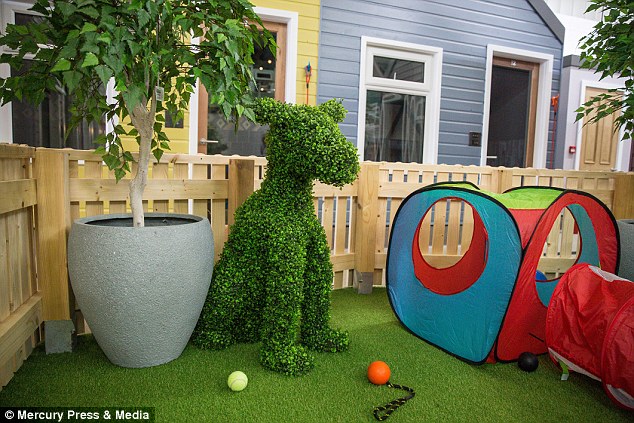 The hotel also has play areas so the dogs can get exercise, make new friends and enjoy some play time 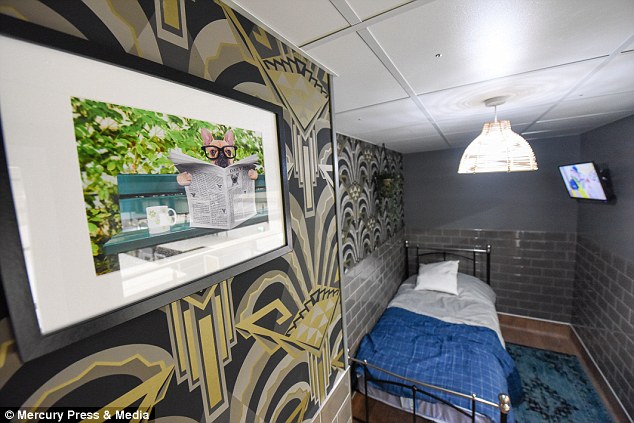 The hotel rooms feature memory foam beds, under floor heating, TVs, made beds, artwork on the walls and mood lighting 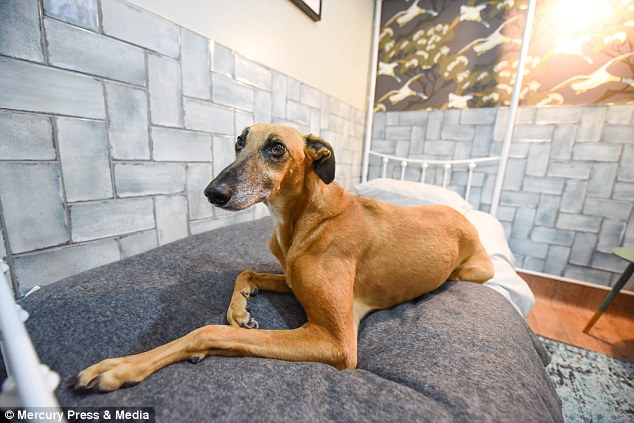 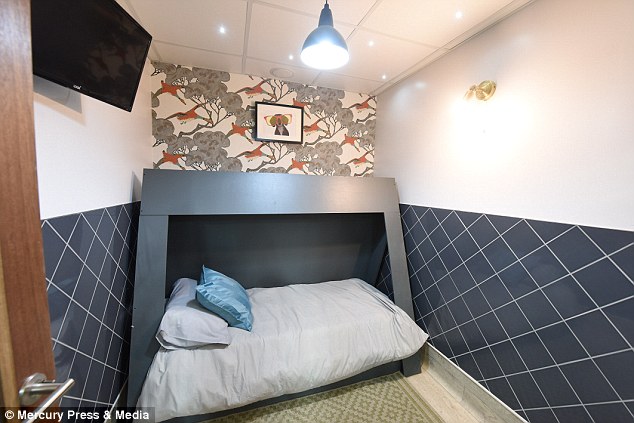 Scott wanted all the rooms to be just like a bedroom at home so they’ve got full size beds, TVs, memory foam quilts and mood lighting.

He added: ‘When you walk into a kennel the dogs are always barking and crying because it’s horrible for them being left. They don’t know when their parents are coming to get them. It’s distressing.

‘But here we’ve got staff on 24 hours a day and if a dog is crying, someone will go in and spend all night with them if needs be. 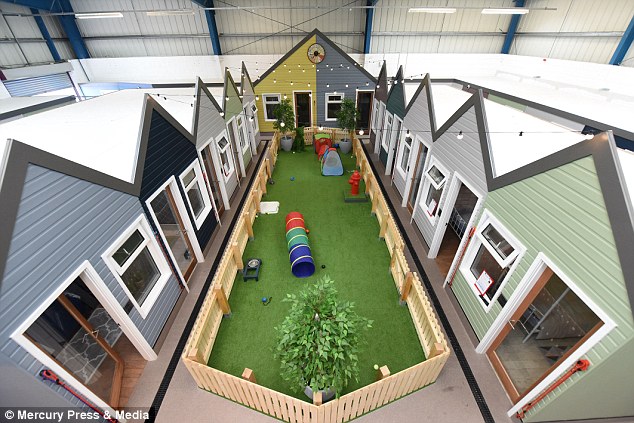 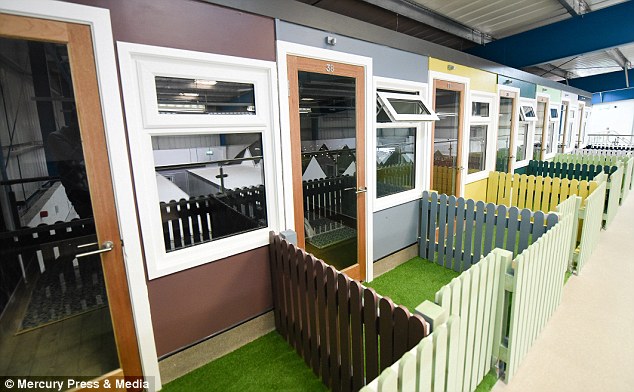 Love Ur Dog has 42 rooms with dog owners paying £25 a night for an executive suite, £35 for garden view suites and £45 for a penthouse suite 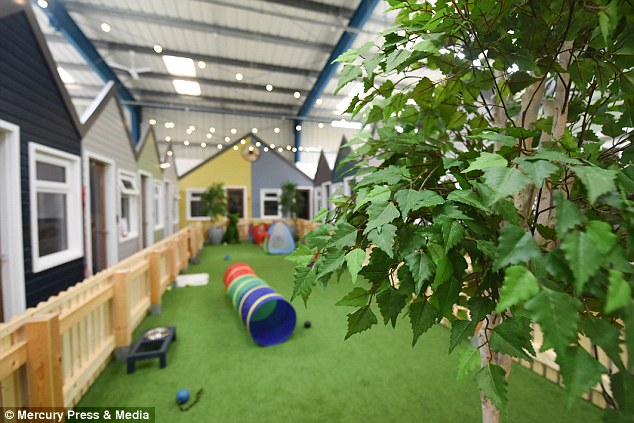 ‘A lot of thought has gone into making sure that everything is perfect.

‘We’re doing incredibly well and we really didn’t expect it but it’s not about the money or success, it’s about the love of dogs. We want to see dogs happy and safe.’

The dad of one revealed that since their launch, the hotel has even garnered the attention of certain celebrity footballers.

As a precaution, they have had to install extra security to ensure their famous guests are safe and sound during their stays.

Scott said: ‘We have just started getting footballers coming in so we’ve had to up our security. 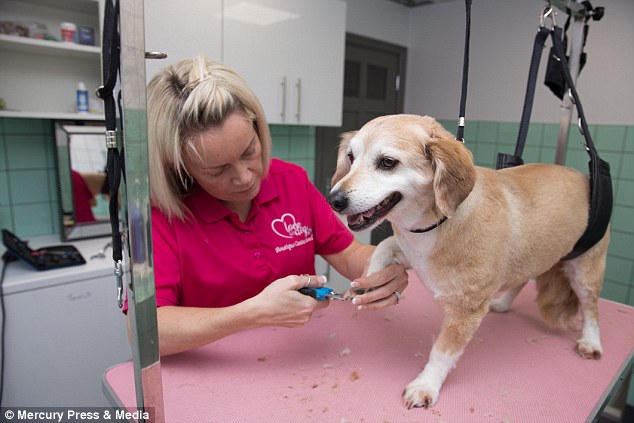 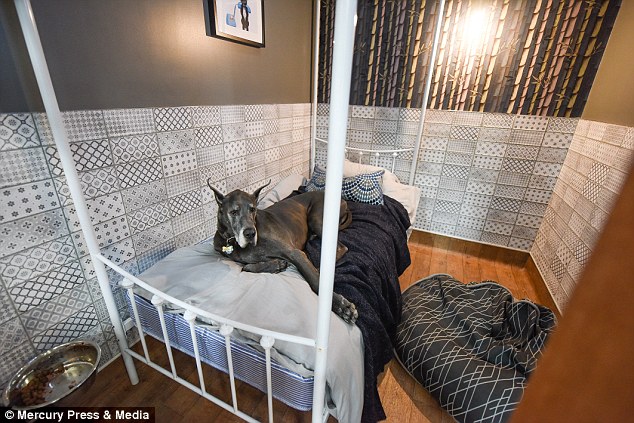 Dad-of-one Scott revealed that since their launch, the hotel has even garnered the attention of certain celebrity footballers 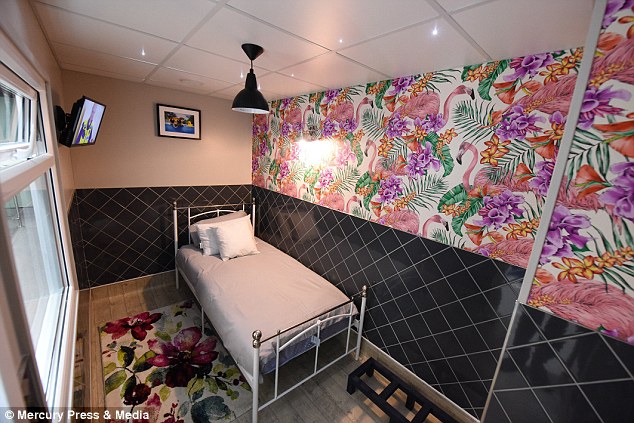 The rooms are kitted out with decorations including rugs, bed toppers, wallpaper and artwork like the picture above

‘You never know who might try to get in if they found out a certain celebrity’s dog was staying so we have done everything to make sure all our guests are safe at all times.’

Love Ur Dog has 42 rooms, with dog owners paying £25 a night for an executive suite, £35 for garden view suites and £45 for a penthouse suite.

There’s also a range of specialist suites for puppies, families of fur babies, pooches that prefer a quieter life and XL hounds.

All rooms have underfloor heating, under bed heating and surround sound systems.

To ensure their guests get the exercise they need during their stay, the hotel runs a walking club around 12 hectares of private land. 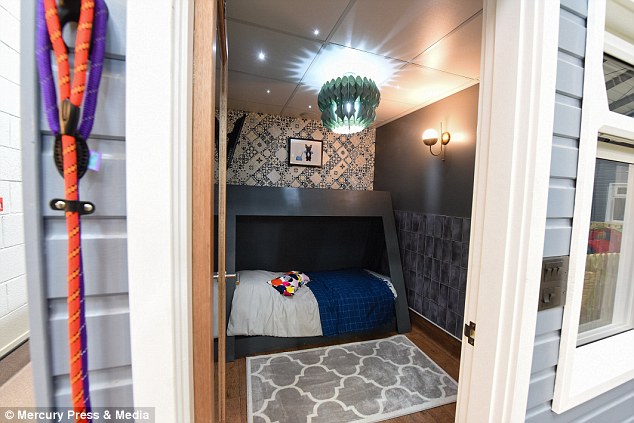 There’s also a range of specialist suites for puppies, families of fur babies, pooches that prefer a quieter life and XL hounds 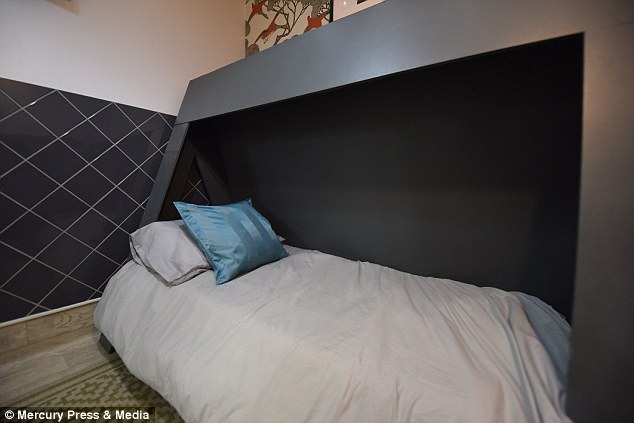 Scott wanted all the rooms to be just like a bedroom at home so they’ve got full size beds, TVs, memory foam quilts and mood lighting

Pups can also benefit from using the swimming pool and plenty of play areas – or more chilled out canines can head to the grooming spa to be pampered.

And it’s not just dogs getting the five star treatment as Love Ur Dog also run a chauffeur service to and from the airport for pet owners.

Scott said: ‘Every stay is tailored to meet each dog’s needs.

‘If your dog needs loads of exercise we recommend they’re signed up for our walking club. We’ve got a huge walking track and it’s all on private land.

‘Or if you think your dog deserves a holiday too then they can just chill out and relax – and watch TV.

‘People don’t think the dogs actually watch TV but they do. It’s like company for them too.’ 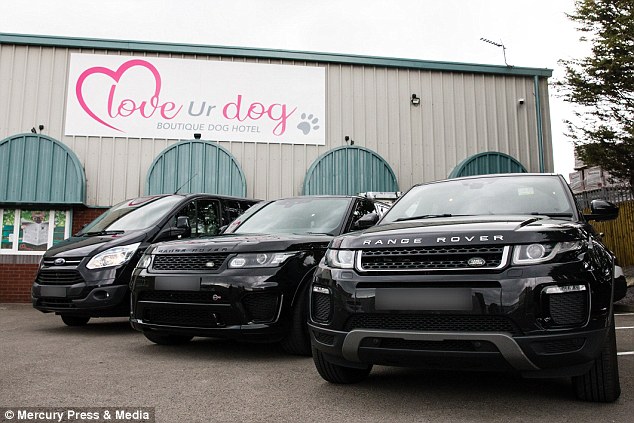 The hotel turns the TVs on during the day and then at night plays classical music to help the pooches relax.

‘We make sure none of the dogs are ever cooped up during the day. They’re always out running around and playing.’ Scott added.

It even has a chef so your pet can have home cooked meals every day. If your dog has special dietary require or you want to provide their food, the kitchen can sort that out too.

Scott said: ‘The hotel wasn’t just set up by dog lovers, it’s run by dog lovers too and all the staff think it is an amazing place to be. 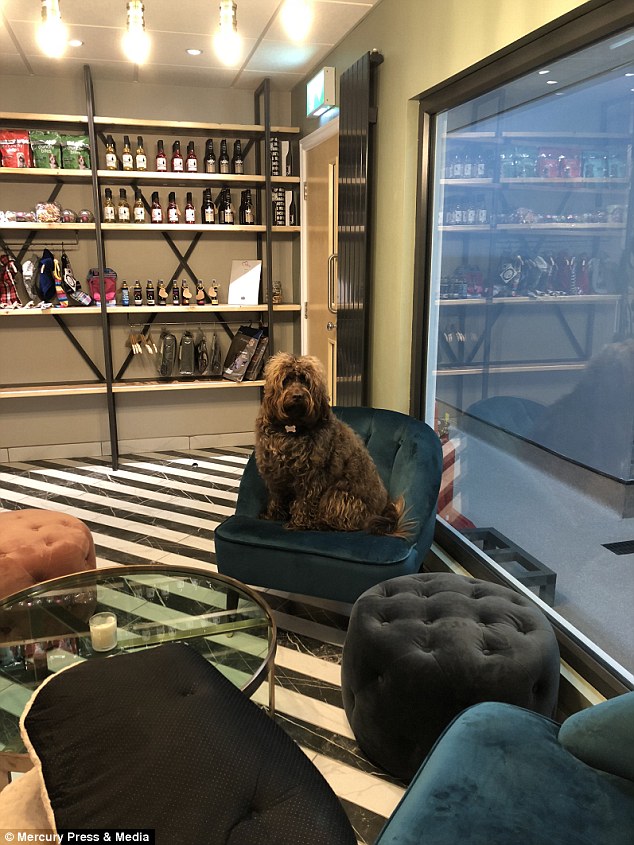 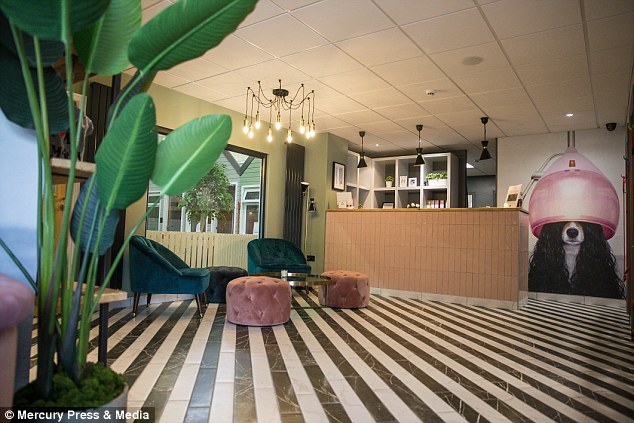 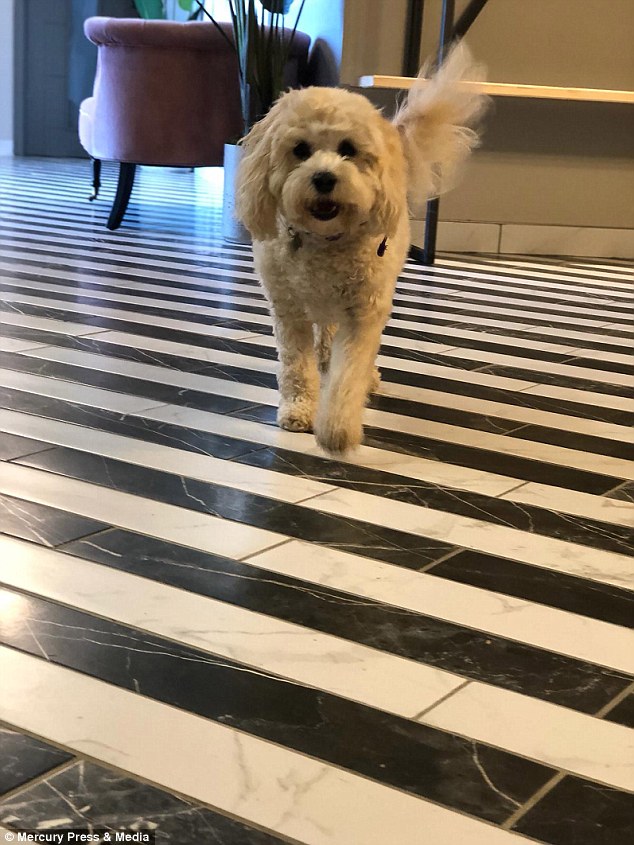 ‘There’s only one downside of the job and that’s having to say goodbye to our guests when they leave. You spend so much time with them that you do get attached.’

The project has gone so well for Scott and his family that they are already considering opening a second premises in Manchester.

Scott said: ‘The reviews we’ve had so far have been absolutely amazing and bookings are going through the roof. 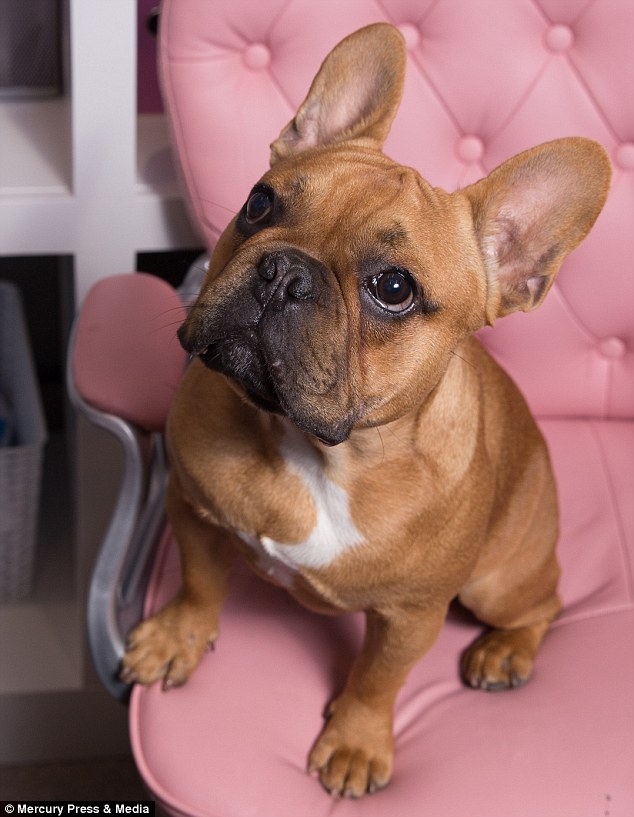 ‘We just were not expecting it at all. It’s been fantastic.

‘Things are going so well that we’re already looking at getting a second building.

‘I started this as a project to look after my dogs and it’s really taken off. Hopefully it will be a growing thing.’

We’ve all been making big mistake when cooking pancakes, according to top chef