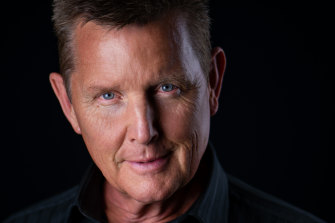 My maternal grandmother, Gertrude, and paternal grandmother, Doris, got their nicknames, “Red Granny” and “Blue Granny”, because of the colour of their cardigans. Both were very present in my childhood, between the ages of six and 10, when we lived in England.

My mother, Angela, was a teacher; she studied geology and worked at a university before she had four children with my dad, Tony. They relocated to Canada after World War II and I was born in Toronto, as was my elder sister Susan, who is two years older. Mum was a stay-at-home mother after that, and had two more daughters – my sisters Kath [four years younger than me] and Lee [six years younger].

Dad worked in the corporate world – his work saw us move to New York, then to England until I was 10, and then we migrated as a family to Australia. It was six months after arriving in Australia that my parents divorced. It was traumatic for the family; it changed our lives.

Mum moved back to England with my two younger sisters, while Susan and I remained with my father here. There was a complete split. You had the possibility of a three-minute phone call, but it was expensive and didn’t happen often.

I really missed my mother. I’d always been around women and didn’t feel close to my father. He spent most of his energy on work.

My father remarried and his wife had three daughters. We were one of those dysfunctional Brady Bunch-type families, living together in Sydney. My sister Susan didn’t get along with our stepmother and as soon as she could exit the house, she did. She changed her name to Kiesha, went on a spiritual journey in life, discovered yoga and studied meditation. She is a self-help therapist in northern NSW.

I didn’t see my mother from the age of 13 until I was 25. It was only after I’d appeared in The Man from Snowy River that I thought, “I have to do something about this disconnection.” That’s when I re-established contact with Mum and Lee, who I also hadn’t seen since I was 13 – my other sister, Kath, had come to Australia a few times in between. Lee now lives in Australia with her family.

Mum is 93 and lives in Scotland with Kath and her husband. She comes to Australia often and has a relationship with her grandchildren. So many traits in me are like Mum. We are closer now than ever, which seems odd given the time we spent apart.

An embarrassing first kiss happened in my teens. We were playing spin the bottle and I had to kiss a girl called Lindsay. I was so nervous. It was terrible and I was overwhelmed in that moment.

In my last year of high school, I fell for a girl, Johanna. It was my first real love and school work suffered because I couldn’t stop thinking about her.

I became very good friends with actress Sigrid Thornton when we bonded in the screen test for The Man from Snowy River. She is the loveliest person you’ll ever meet – everybody who works with her says that. The chemistry between us was really captured in that movie and it was pivotal in our working relationship.

Nicole Kidman and I made a movie, Windrider, in 1986 and dated for three years. I was 11 years older and it was her first relationship with a man as an adult. We had happy times, but she had her own path to take in life. One thing that has been written about us, which is incorrect, is that I asked her to marry me and she said no. I’ve only proposed once in my life.

I met my wife, Mandy Carnie, while we were working on the show How to Succeed in Business Without Really Trying. We got married in 1996 and have three children [Mia, 20, Guy, 18, and Ricki, 12].

I am 16 years older than Mandy. She made it known early on that she wanted to marry and have children, and if I wasn’t interested in that I could hit the road, Jack. Mandy became so important to me, she turned my thinking around about marriage and “happily ever after”. She’s loving and supportive and I can’t imagine my life without her.

Tom Burlinson & His 20-Piece Orchestra, Swingin’ the Great Standards, March 6 at The Palms at Crown, Melbourne.

This article appears in Sunday Life magazine within the Sun-Herald and the Sunday Age on sale February 16.

‘Grey’s Anatomy’ Is Now Trying To Kill Off Richard Webber, As If Things Weren’t Bad Enough