Australian Defence Force officials were sent to Victoria to help plan the emergency response to the COVID pandemic – including the quarantining of returned travellers – a week before the hotel regime was approved by the national cabinet.

A timeline of ADF communications reveals that top brass repeatedly made it clear that help was available to all states, but the Andrews Government and Victoria’s emergency agencies chose not to call on defence personnel to strengthen its quarantine arrangements. 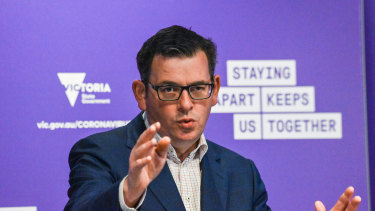 Premier Daniel Andrews is standing by his statement that the Defence Force did not offer help with the quarantine of returned overseas travellers.Credit:Joe Armao

On March 27, the day Prime Minister Scott Morrison announced that all returned travellers would spend two weeks in mandatory quarantine, Chief of Defence Angus Campbell instructed his Victorian-based liaison team to make up to 100 personnel available to respond to any requests from the state.

The following day, an ADF liaison officer reported back to Canberra that Victoria Police was “well advanced" in its planning and preparation for quarantine and “this plan does not presently include or require ADF involvement".

In the early days of the quarantine regime, ADF COVID-19 taskforce head Major General Paul Kenny briefed state and territory police chiefs on how troops had been deployed to manage the regime in Queensland and NSW.

Regular, “situational reports’’ provided by Defence's liaison team working inside Victoria’s State Emergency Centre show that over the next two months, the force's standing offer to help was met with no Victorian request for assistance on hotel quarantine.

The communications show that by April 17, the liaison was reporting that Victoria was nearing its capacity to quarantine returned travellers.

By May 14, when Major General Kenny visited Victoria and met Emergency Management Commissioner Andrew Crisp, Victorian officials told him the situation “had improved to such an extent that it was unlikely they would require further ADF support.’’ 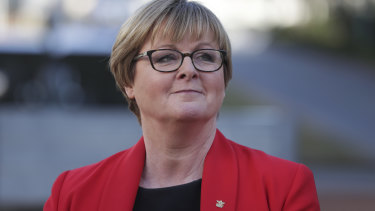 Within two weeks, Victoria’s Department of Health and Human Services reported the first cases of security guards being infected at one of the quarantine hotels, Rydges on Swanston. By mid-June, those cases had climbed to 60 and unleashed a second surge of the coronavirus pandemic.

The Defence communications will intensify the political schism between Canberra and Victoria over hotel quarantine.

Premier Daniel Andrews on Wednesday stood by his testimony given the previous day to a parliamentary committee that the Defence Force never offered to help guard quarantine hotels. 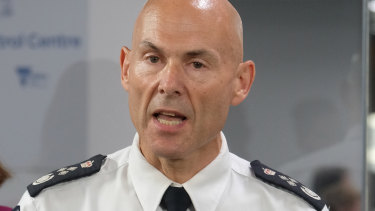 “I did not seek nor did representatives of the ADF offer assistance as part of the hotel quarantine program [on March 27 and 28]," Commissioner Crisp said.

Senator Reynolds' statement on Tuesday included a list of times the offer of ADF assistance had been made, and came hours after the Premier told the Victorian Parliament's public accounts and estimates committee, "I don't believe ADF support was on offer".

The latest stoush has prompted Victorian Opposition Leader Michael O'Brien, for the first time since the start of the pandemic, to call for the Premier's resignation.

Mr Andrews on Wednesday said he stood by his evidence and accused the Defence Minister of “playing politics”.

"The notion that has occurred is not just right. If others have got time to issue statements, which are then contradicted in pretty clear terms by the Emergency Management Commissioner who's on the ground doing this work, then great. I'm glad they've got enough time to do that. I'm glad there's other people who think the best contribution they can make is to be playing politics."

A spokeswoman for Ms Reynolds said the Senator stood by her statement that the Defence Force made multiple offers to multiple agencies, including Emergency Management Victoria and Victoria Police, to assist with hotel quarantine.

In his statement, Commissioner Crisp confirmed the ADF were involved in the initial planning of the hotel quarantine program on March 27 and 28.

“During these discussions I did not seek nor did representatives of the ADF offer assistance as part of the hotel quarantine program,” Commissioner Crisp said.

“Subsequent communications with the ADF on the 12th and 15th of April did not relate to ADF assistance as part of the program. As the Victorian Emergency Management Commissioner I am enormously grateful for all of the assistance our colleagues in the Australian Defence Force have provided as we have responded together to the coronavirus pandemic.”

Mr Crisp did not mention in his statement his request for 850 personnel on June 24, which was signed off by the Commonwealth but then withdrawn by the Victorian government the next day.

Asked if anyone from the state government was at the meeting on March 27, a government spokesperson said those issues would be examined by the quarantine inquiry.

No state ministers or their staff attended the meeting, according to government sources.

Mr O’Brien said Mr Andrews’ evidence to the parliamentary inquiry proved he’s not a leader that Victorians could trust anymore.

A spokeswoman for Victoria Police said: “Victoria Police was not in charge of the quarantine hotels and any questions regarding resources need to be directed to the government.”

Get our Coronavirus Update newsletter for the day’s crucial developments at a glance, the numbers you need to know and what our readers are saying. Sign up to The Sydney Morning Herald’s newsletter here and The Age’s here.

Jamie Foxx Says He 'Should Have' Dated Garcelle Beauvais: 'I F–ked Up'