I grew up just two blocks from the factory that produced “the health food of a nation”. Every day, I’d walk to my local state school in Melbourne’s North Richmond past Peters Ice Cream, counting the trucks in the yard, and peering through the roller door of the warehouse, dreaming of all the ice-creams inside. No wonder I grew up on a constant diet of Kreem-B-Tweens, Eskimo Pies, Choc Wedges, Two-In-Ones and Drumsticks.

But the biggest treat came after tea, when Mum would bring out a brick of Neapolitan ice-cream, peeling back the waxed cardboard to reveal the distinct layers of pink, brown and white. Heaven. And hell. At some point in life, you discover that it’s not just you: everybody wants the chocolate flavour. 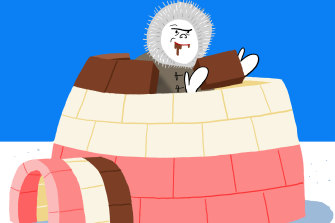 With three older brothers, there were squabbles galore. But once the chocolate was gone, it was surprising how well we all put up with the hitherto maligned strawberry and vanilla.

And now – hallelujah – our chefs are tapping into this nostalgia for more innocent times by bringing back Neapolitan. At Sydney’s Bar Totti and Totti’s in Bondi, Mike Eggert and his team sandwich their house-made Neapolitan ice-cream between two crisp wafers and cut it in half. Cue perfectly mature adults squabbling among themselves for a bite.

There’s even a Neapoli-tin gelato at The Continental Deli & Bar in Sydney, canned by the same team who brought the world the Mar-tinny, Can-hattan and Cosmopoli-tin cocktails. And at Stokehouse St Kilda in Melbourne and Stokehouse Q in Brisbane, pastry chef Lauren Eldridge has turned the idea of Neapolitan ice-cream into the most polished dessert I had in 2019 (and I had a few).

Eldridge’s is a stack of three perfectly precise tiles; a pure white vanilla semifreddo, a vividly scarlet sorbet of rosella, a native hibiscus, and the third, a rich, dark chocolate mousse. Each slice is spray-painted with melted chocolate and tinted cocoa butter to create a crisp Magnum-like shell that cracks against your spoon.

Apart from being positively awe-inspiring in terms of creativity, art, science, texture and temperature, it’s phenomenally good to eat; quietly, dreamily, and without the squabbles.

Apparently, the kitchen gets endless requests for “just the chocolate one”. Some people never grow up.

To read more from Good Weekend magazine, visit our page at The Sydney Morning Herald, The Age and Brisbane Times.

‘Grey’s Anatomy’ Is Now Trying To Kill Off Richard Webber, As If Things Weren’t Bad Enough