Home » Sport » A 24-year-old American scored a frightening KO with an awesome power punch, then trash-talked over his opponent’s body

A 24-year-old American scored a frightening KO with an awesome power punch, then trash-talked over his opponent’s body 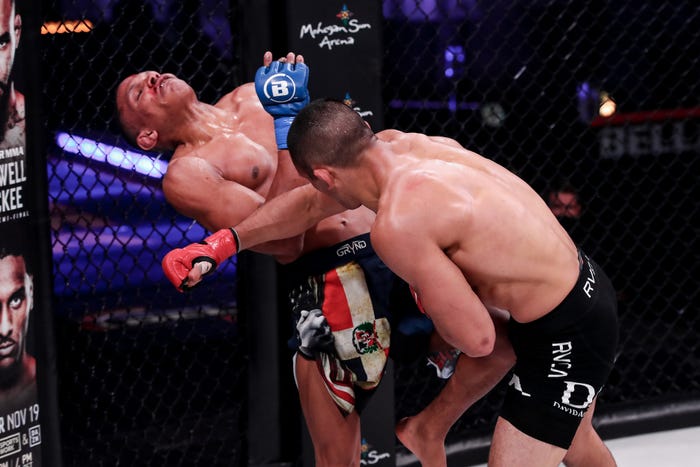 A 24-year-old American called Aaron Pico scored a frightening knockout with a tremendous power punch, then trash-talked over his opponent's body.

On Thursday, at the behind-closed-doors Mohegan Sun Casino in Uncasville, Connecticut, Pico dominated John de Jesus with a variety of blue-chip skills.

The first round was one-sided as Pico took his opponent to the floor and manhandled him with nasty ground-and-pound.

Pico finished the fight for good in the second round with a right hand thrown over the top. As soon as it hit de Jesus, he crumpled to the floor, beaten.

The sound of the punch alone is a testament to how heavy Pico's hands are and that if he continues to improve and work his way up the featherweight rankings, he can pose many an opponent a problem.

It took de Jesus at least two seconds to regain his senses after being beaten to the ground with that one-punch knockdown, and then all he could do was cover-up, but the referee had seen enough. It was over. Pico rained down some verbals on the sprawled de Jesus and ordered to walk away by the referee.

Pico is one of the most interesting prospects in mixed martial arts.

He was once considered the most promising young talent in combat sports, according to the Bellator MMA boss Scott Coker. He told Insider as early as 2017, before the fighter had made his pro debut, that the company had been investing in Pico for years.

But disaster struck in his first bout when he submitted via guillotine choke in the first round of Bellator 180 and suffered back-to-back losses in 2019.

With his most recent victory, Pico now has three wins on the spin and is living up to his billing with many more years ahead of him to develop further.

Much of that recent success coincides with moving his camp to JacksonWink MMA, in Albuquerque, New Mexico, training alongside bona fide fighting stars Jon Jones and Holly Holm.

His record now stands at seven wins (six knockouts and one submission) against three defeats.