Home » Sport » ‘A hell of a ride’: Halpin’s Swift rise to fan favourite

‘A hell of a ride’: Halpin’s Swift rise to fan favourite

After beginning the year as a training partner, Sophie Halpin still can't quite believe she's about to step onto the court for a grand final.

"I still have to pinch myself sometimes. It's honestly a dream," she said. 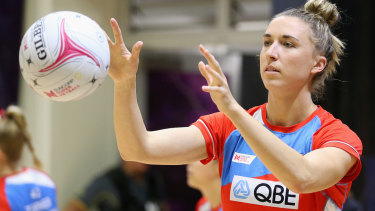 “I still have to pinch myself sometimes”: Sophie Halpin.Credit:Getty Images

Initially taking the court as an injury replacement in the opening rounds, the 26-year-old has played every game for the NSW Swifts this season and was offered a full-time contract in the middle of the year.

"It's obviously really hard at the start – you want to put your best put forward, but you're not getting paid," she said of her time on the periphery.

"It's tricky. If you become a training partner you want to be a Swift and you give up everything. It's just been a hell of a ride this year."

Juggling a full-time job at a bank along with her training, Halpin is also planning a wedding in January and building a house.

"I've got a lot of my plate this year – but I think it's just time management and your want for [netball]," she said.

"I love this sport, it's not a chore for me, coming to training is the fun part." 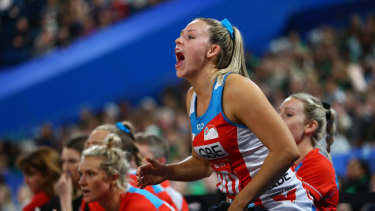 Fan favourite: Halpin shouts encouragement to her team from the sideline. Credit:AAP

Halpin's attitude and effort have endeared her to fans across a stellar season, which now sees the Swifts attempting to knock off the Sunshine Coast Lightning in this weekend's decider.

The Swifts have bounced back from consecutive seasons outside the top four to finish second on the ladder – only narrowly behind the Lightning, who are back-to-back grand final winners.

But what's been the biggest difference?

"Briony's (head coach Briony Akle) really instilled that in us, just trying to show us that we are great players and that we should be aiming to be in the grand final every year. As you can see it's paying off."

It will be a tough ask for the club – they've played Sunshine Coast three times this year, including in the first week of the finals, losing all three.

"We just need to focus on the process and our game plan. The coaches put out a game plan and if we just focus on that, and ourselves, then we're a big chance of winning it," Halpin said.

NSW will travel to Queensland on Friday to prepare for the grand final at 1pm (AEST) on Sunday.