ANTHONY JOSHUA had to be pulled away from Kubrat Pulev at their Friday weigh-in as the Saturday fight threatened to start early.

AJ, 31, got his giant right hand on the Bulgarian’s left shoulder after the 39-year-old veteran overstepped the mark as a war of words broke out in a chorus of screams and shouts from his team. 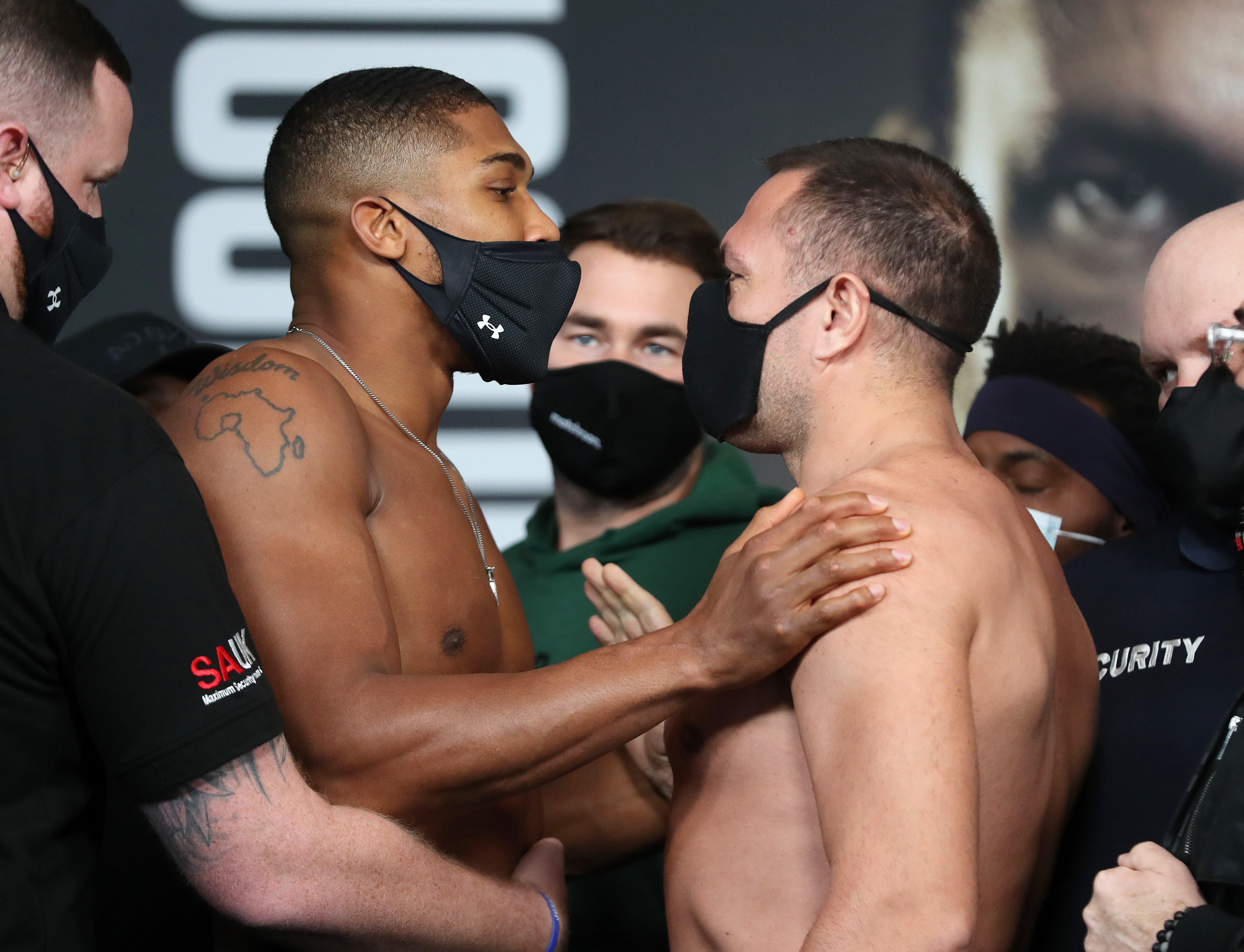 Joshua weighed-in at 17st 2lbs, three pounds heavier than he was for the rematch win over Andy Ruiz Jr in December 2019.

And after both fighters completed the formalities, they broke out into a battle of shouting and finger wagging, following by a round of fist punching.

Eddie Hearn later confessed the brawl was NOT staged and he 'has the skid marks' to prove it as security guards held back members of Pulev's team.

On the scuffle, AJ said: “I don’t know what sparked that. That’s just how we are.

“He has spoken a lot of rubbish and now he has to back it up.

“I have seen so many fighters talk a load of rubbish and then get smacked up.

“If you don’t know boxing then that sort of thing could intimidate you but I could have whacked him up there but I have to save it for tomorrow."

Hearn then revealed what was said, revealing: “Pulev just kept saying 'tomorrow, tomorrow' so Joshua went 'What do you mean tomorrow?’

“Pulev said 'Tomorrow I'm going to beat you and show you'.

“Pulev kept talking so Joshua said 'Come over here and say it'.

“Pulev said again 'tomorrow I'll beat you' and AJ said 'What? You? Disrespect me and I'll show you'.

“Pulev said 'I respect you' and that dampened it.

"Pulev then said 'Tomorrow I will beat you, I will finish you, I will end you. You know I'm better than you'.

"I'll train tonight, keep a good routine. I sparred yesterday so tonight will be a shake out.

"I've studied him, he thinks he's a warrior.

"I told him, 'Don't let the fighters you've fought gas you up. You're in against a real one now'.

"When people come in the ring against me they're confident then after a few rounds their soul gets destroyed.

"Once I see that I can take them out.

"We're big boys, I don't know how to explain it but we punch heavy.

"First man to land, I think that will be the last man standing."

Pulev looked in great shape for a 39-year-old veteran and it was confirmed he had trimmed 9lbs off since his last fight back in November 2019.

The Bulgarian said: “My physique is different. I have a lot of experience.

“In amateur boxing I have more than 300 amateur fights, I don't know how many.

“But in pro boxing, also ten years, I don't know maybe the physique with the years and fights comes stronger.”