He has retired from the NBL but Canberra's Anthony Petrie isn't done chasing glory on the basketball court.

Petrie guided The Platypuses to a 21-15 victory over the Bears in the final of the NBL's first three-on-three Pro Hustle event in Melbourne on Sunday. 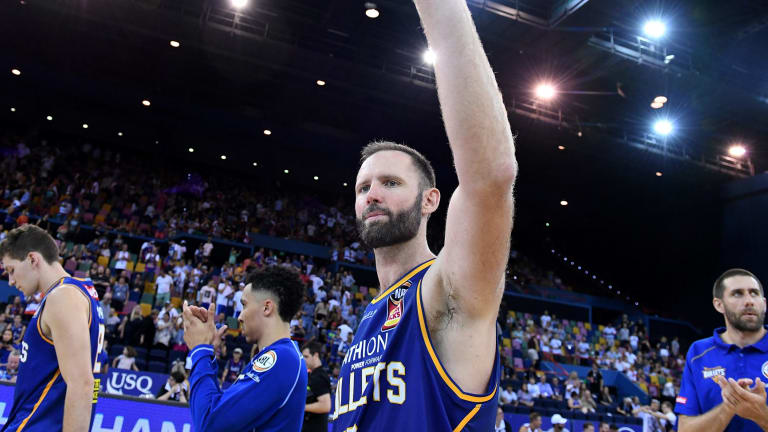 The former Canberra Gunners star retired from professional basketball after a decade at the top earlier this year but proved he still has some life left alongside teammates Jeremy Kendle and Peter Crawford.

What made it more remarkable was they did it with three players all day – just about every other team had four players. Petrie laughs they simply couldn't find anyone but it didn't matter in the end.

"The NBL in both five-on-five and now three-on-three are just doing amazing things and giving someone like myself, who still loves the game but probably needs to redefine the way he plays, this is the perfect platform," Petrie said.

"The best part is I played with Pete and Jk, and getting to come and hoop and hang out with quality guys and play guys that play three-on-three solely and they know how to play, we were keeping our head above water early in the day but we figured it out late.

"The kids are going to eat well this week man, four kids and a wife. It’s good prize money for 60 minutes of work.

"It’s intense and it’s hard, and I think that is the art to it, learning how to manage your body in those quick breaks because you cool down and then you’ve got to get going again.

"You play to win first and then trophies and monetary value, that’s second, so that comes by doing the process and trying to win.

"Any time you get some money for playing sport, we’re very lucky so it’s great the NBL is doing this."

The 34-year-old added another spice to the strong Canberra flavour with two teams from the capital turning out with the three-leg tournament offering big prize money and overseas playing opportunities.

Keely Froling led Canberra's women's team – also featuring Kate Gaze, Sarah McAppion and Chloe Tugliach – to the quarter-finals, where they bowed out with a 21-11 loss to the eventual champions, the Spectres.

Canberra's men's side – Reece Kaye, Dylan Simpson, Lachlan Ross and Tim Hewett – suffered the same fate with a 21-13 defeat to the Spectres in their quarter-final.

It came less than 24 hours after Froling registered 21 points, 14 rebounds and 10 assists while Gaze notched up 21 points and eight assists in the Canberra Capitals Academy's 80-72 loss to Geelong in the SEABL at Belconnen Basketball Stadium on Saturday night.

Meanwhile, the Canberra Gunners opened their SEABL campaign with a 107-81 loss to Geelong despite the efforts of Daniel Joyce (25 points) and Eric Gaff (19 points and nine rebounds).

How Tottenham could line up under Nuno Espirito Santo with Pjanic, Insigne and Seferovic but no Kane or Alderweireld

Crystal Palace 2 West Ham 3: Tomas Soucek at the double as Hammers battle back from goal down to go FOURTH