Star colt Trapeze Artist is the first horse to secure a slot in The Everest this year after owner Bert Vieira and Queensland stable Aquis Farm signed a deal on Monday.

The three-time group one winner is the hottest property in Australian racing after adding TJ Smith and All Aged Stakes wins to his Golden Rose from the spring, but Vieira decided to race on rather than head to stud. 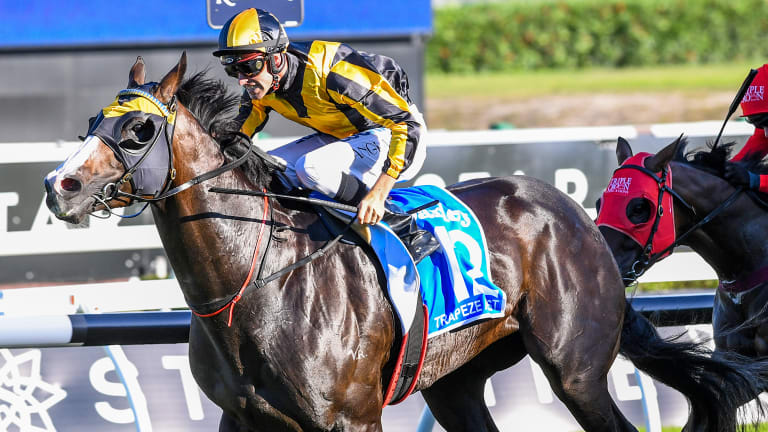 Hot property: Trapeze Artist wins the TJ Smith earlier this month and will run in Aquis Farm’s slot in the Everest in October.

It means the son of Snitzel will chase the biggest sprint prizes around the world starting with the Everest, before possible overseas raids on Hong Kong and Royal Ascot.

“Knowing Shane McGrath, the Aquis CEO, from his Coolmore days made the negotiations very easy and smooth and to be sharing this experience with Aquis will only make it better."

The deal with Aquis is only for The Everest slot, but the relatively new player on the breeding scene must now have the inside running to stand Trapeze Artist at the end of his career.

“There were a lot of good deals to go to stud but there are more memories to be had on the track. Trapeze Artist has given me and my family so many great memories already," Vieira said.

“They were a bit worried about him racing on, because of his value, but they are looking forward to the next year now.

"We will talk about a stud deal after that."

Trapeze Artist will head for its spelling on Wednesday and trainer Gerald Ryan is already planning how to get to The Everest at Randwick on October 13.

“The good thing is that we are in the race and we can toss around a program in the next couple of months. He will be doing his lead-up racing in Sydney because the record of horses going to Melbourne and coming back is so bad.”