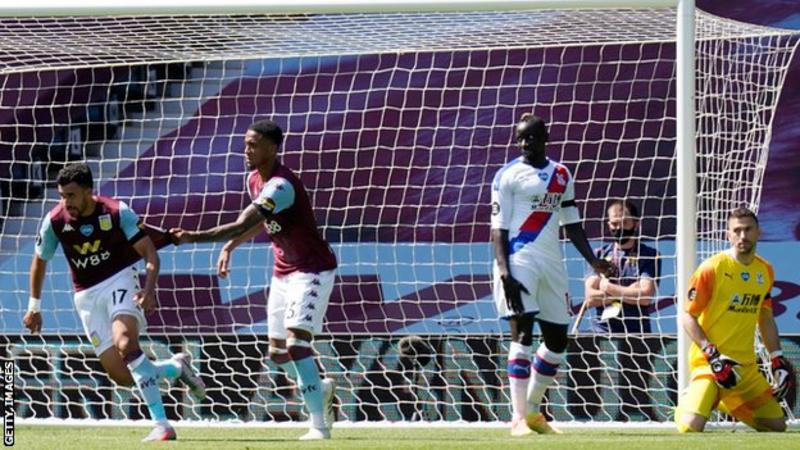 Mamadou Sakho thought he had put Palace ahead when the ball appeared to strike the defender’s shoulder on its way into the net – but it was ruled out for handball after a lengthy delay, much to the visitors’ dismay.

Villa then took the lead just before half-time when Egypt winger Trezeguet side-footed the ball into the net at the back post after Palace had failed to clear a free-kick.

Shortly after the break, the hosts were awarded a penalty by referee Martin Atkinson after Patrick van Aanholt’s challenge on Jack Grealish, but the decision was overturned after another long VAR check.

Villa’s first Premier League win since 21 January was sealed when Trezeguet toe-poked home his second goal to leave the West Midlands side four points from safety with three matches, against Everton (away), Arsenal (home) and West Ham (away), to go.

After the final whistle, Palace forward Christian Benteke, who was playing against his former club, was shown a red card as tempers boiled over.

Palace, who have now lost their past five league games, started with Wilfried Zaha, who revealed before the match he had received racist abuse on social media.

Villa are running out of time to pull off a miraculous escape but a first win in 11 league games at least gives them a fighting chance.

After victories for fellow strugglers Watford and West Ham United on Saturday, the visit of Palace was a must-win game for Villa and Dean Smith’s side delivered – even if they did require a slice of luck to achieve it.

With the game goalless, it appeared a harsh VAR decision to deny Sakho a goal because of handball as Luka Milivojevic’s looping ball appeared to come off the defender’s shoulder on its way past keeper Pepe Reina.

Villa recovered from that scare to seize control, Mbwana Samatta heading over a good chance before Grealish was denied by a good Vicente Guaita save.

The breakthrough came on the stroke of half-time, Trezeguet pouncing after a free-kick was inadvertently flicked on by Joel Ward into the path of the forward.

Villa kept their focus after having Atkinson’s decision to award a penalty overturned, and Trezeguet struck a crucial second after the ball fell to him inside the penalty area.

Reina produced a fine stop to keep out Van Aanholt soon after Guaita had prevented Conor Hourihane from making it 3-0.

Villa’s aim is to be in with a chance of staying up by the time they face West Ham on the final day of the season on 26 July. This result at least gives them hope.

Flat ending to the season for Palace

Palace will be upset that Sakho’s goal was overturned but they were well beaten in a match which ended in ugly fashion.

Benteke, who was twice denied in the first half by Reina, was shown a red card following a flashpoint after the final whistle had been blown.

It completed a miserable day for Hodgson’s side, who have lost five of their six games since the Premier League resumed.

Palace, who have already secured an eighth successive campaign in the top flight, have failed to score in five of the past six matches.

With home games against Manchester United and Tottenham, as well as a trip to Wolves, still to come, Hodgson will be seeking an improvement from his side before the end of the season.

Both teams are back in action on Thursday. Villa travel to Merseyside to face Everton (18:00 BST), while Crystal Palace host Manchester United at Selhurst Park (20:15).

Christian Benteke (Crystal Palace) wins a free kick in the attacking half.

Attempt missed. Christian Benteke (Crystal Palace) header from the centre of the box is too high. Assisted by Patrick van Aanholt with a cross following a set piece situation.

Douglas Luiz (Aston Villa) is shown the yellow card for a bad foul.

Wilfried Zaha (Crystal Palace) wins a free kick in the attacking half.

Attempt missed. Christian Benteke (Crystal Palace) right footed shot from the centre of the box is high and wide to the right. Assisted by James McCarthy.

Attempt missed. Christian Benteke (Crystal Palace) header from very close range is high and wide to the left. Assisted by Andros Townsend with a cross following a set piece situation.

Tyrone Mings (Aston Villa) wins a free kick in the defensive half.

Attempt saved. Patrick van Aanholt (Crystal Palace) left footed shot from the left side of the box is saved in the centre of the goal. Assisted by Wilfried Zaha.

John McGinn (Aston Villa) wins a free kick in the defensive half.

Luka Milivojevic (Crystal Palace) is shown the yellow card for a bad foul.

Jack Grealish (Aston Villa) wins a free kick in the attacking half.

Attempt saved. Jack Grealish (Aston Villa) right footed shot from outside the box is saved in the centre of the goal. Assisted by John McGinn.