Australian under-17 player James Fletcher giving back to junior club

Australian under-17 player James Fletcher has returned to his junior club and wants to help deliver Gungahlin United a Canberra premier league title this season.

Fletcher played at Gungahlin until under-14 before transitioning into the representative system, first playing for the FFA Centre of Excellence and then Canberra United in the National Youth League last summer. 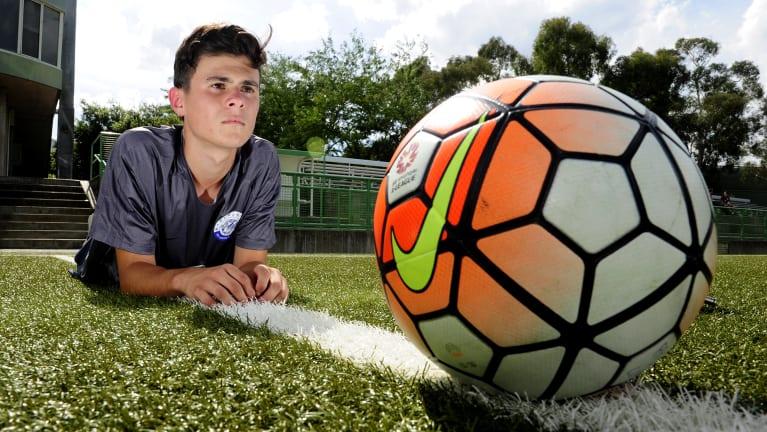 The 17-year-old was selected for the Joeys last season and played tournaments with the national team in Cambodia and India.

Fletcher has returned to where it all began this season, with the year 12 student hoping to launch a professional career at an A-League club next year.

"I’d love to pursue football as a career but we'll just have to see what happens and I need to focus on school as well so I’ve got something to fall back on," Fletcher said.

"I'm focused on playing well week-in week-out, so at the end of the season I can hopefully transition to an A-League club.

"But at the moment my main focus is definitely on Gungahlin and winning silverware."

The defender has not only linked up with his junior club but junior coach, with Fletcher back playing under Gungahlin United and Canberra United coach Marcel Munoz.

"Marcel actually coached me in 12s, 13s and 14s. I've known him for a long time and it’s really cool how we met up again in the youth league this year," Fletcher said.

"He’s a player-friendly coach who gets to know each player individually and that helps his philosophy which is to play an attractive brand of football.

"He gets the message across really well without having to raise his voice, the whole team has a lot of respect for him."

It hasn't been an ideal start for Gungahlin who have lost their first three games of the season but Fletcher believes a midweek win in the FFA Cup has reinstilled confidence in the team.

"We beat Queanbeyan a few days ago and that's what we needed to kickstart our season, we've been playing really good football and have just been a bit unlucky in close games," Fletcher said.

"We haven't had the cutting edge in the final third to put games away when we’ve been on top. But getting that winning feeling back in the change rooms has created a lot of positive energy."

Munoz was full of praise for Fletcher and believes Gungahlin will collect their first league win of the season when they face Woden-Weston away on Saturday.

"We’re positive we can turn things around, there's only a few things missing and if they start coming together then no doubt we can steady the ship again," Munoz said.

"From all the talk and from seeing a couple of their games, Woden are a highly organised team defensively who understand their strengths and work to counter their opponents.

"We have to be very careful with allowing them the spaces in behind our defensive line so they can't hurt us there."