Home » Sport » Behind the Nets’ Success Is a Carefully Crafted Culture and, Finally, a Clue

Behind the Nets’ Success Is a Carefully Crafted Culture and, Finally, a Clue

If ever there has been an N.B.A. team that was entitled to tank, to deliberately lose for the mathematical calculation of draft lottery luck, it was this season’s Brooklyn Nets as they were on the night of Dec. 5.

The latest in a series of harrowing defeats had left them with an 8-18 record, their best-performing player (Caris LeVert) down with a dislocated foot and little reason to believe there was much to strive for until the annual springtime game show known as the draft lottery.

For a franchise that had disgorged its most recent lottery picks like T-shirts shot into a crowd, tanking for a high draft pick in an all-out pursuit of Zion Williamson, the supposed one-and-done savior from Duke, seemed like the classic contemporary N.B.A. percentage play.

But the Nets, long a franchise nearly impossible to figure, instead won 20 of their next 26 games to become a prime contender for the Adam Silver Integrity Award, if the league’s commissioner, an avowed tsk-tsker on tanking, ever inaugurates it.

On my way to Boston recently for an overnight road trip with my son to watch the Nets play the Celtics, I reached Sean Marks, the Nets’ general manager, by phone — on a scouting trip in Slovenia. First question: How the heck did you convince your team, at 8-18, that the remainder of the season would not be a countdown to a 14 percent lottery prayer for the No. 1 pick?

“I will tell you that we never had to sit down and say, hey, guys, we’re going to keep playing hard,” Marks said — “we” meaning he and Coach Kenny Atkinson. “That was player-led, strictly character-driven.”

It has been a wishful return on assembling a roster of lower draft picks and reclamation projects, players with “chips on their shoulders,” in the general absence of lottery blue chips.

“The never-ending odyssey in this business,” Marks said, “is doing your homework and betting on people, their will and their drive.” 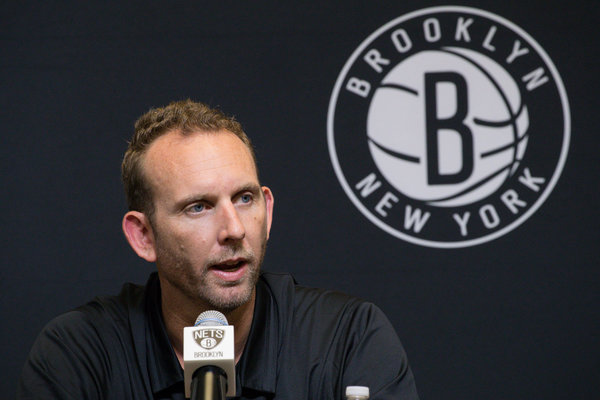 Marks is a 43-year-old New Zealander, drafted in 1998 by the Knicks out of the University of California, Berkeley, and traded the next day with good company, Charles Oakley, to Toronto for Marcus Camby. A 6-foot-10 frontcourt reserve, he survived with modest N.B.A. skills for roughly a decade, which explains much of what has happened since his retirement as a player in 2011.

“There probably are very few people who had careers as long as Sean had while getting as few minutes, and there’s a good reason for that,” said R.C. Buford, the San Antonio Spurs’ general manager, for whom Marks played for two seasons and apprenticed as an assistant coach and front office executive.

“In every role he’s had, he’s been a culture builder,” Buford said.

Around the N.B.A., that word — culture — has become like a convenient catchphrase, an opening statement for best intentions.

“People use it all the time — they’re going to work hard, play defense, play for the team — but how many actually do?” said P.J. Carlesimo, whose N.B.A. stops in coaching and broadcasting have included San Antonio and Brooklyn. “Because of his time with the Spurs, Sean knows what a good locker room is like.”

For contrast, take the Knicks. Their new management team also talks up culture creation, but their stylistic approach in Coach David Fizdale’s first season has been archetypal Y.M.C.A. choose-up. The Knicks’ front office claims operational independence from the team owner, James L. Dolan, but can’t even call an informal news conference without tailoring the guest list to his petty grievances.

In San Antonio, where the Holt family has without question left the basketball people alone, Marks was told in no uncertain terms that he could well be a bridge to a future without Gregg Popovich, the 70-year-old head coach and team president.

But the blank slate in Brooklyn — where ownership is a largely absentee and ambiguously directed partnership between Mikhail Prokhorov and Joseph Tsai — presented a clean-slate challenge that was more intriguing than daunting.

“We knew there were going to be some dark days,” Marks said. “But we all gave up good jobs because we thought we had a chance to build something special.”

Before a culture, first came a core. With a flurry of moves deftly manipulating salary cap space, Marks dealt his way into the lower echelons of the draft and emerged with LeVert, a versatile guard, and Jarrett Allen, a mobile, defensive-minded center.

Through a trade with the Los Angeles Lakers, he reeled in point guard D’Angelo Russell, the No. 2 pick in the 2015 draft who was recently named an Eastern Conference All-Star. Spencer Dinwiddie, a mercurial guard, parlayed a lifeline from the N.B.A.’s developmental league in December 2016 into a $34 million extension two years later.

These Nets had climbed to four games over .500 before hitting a recent rut in which they lost four of five. A hand injury to Dinwiddie hurt a roster already thinned by the loss of LeVert, who could return soon, and Allen Crabbe.

Without marquee talent, the season can be interminably long, winding and bruising. Even in the East, the less forbidding of the two conferences, remaining in playoff position for the Nets will require a collective stamina they may not yet have.

If they do qualify, Marks could be a candidate for executive of the year for stocking his roster with hope, against the odds. Is there a more difficult projection in team sports drafting than being outside N.B.A. lottery position?

“It’s very different than the other sports,” Buford said. “Even in the top 10 picks, only about 80 percent will find their way into a rotation.”

The Spurs’ foundation and selfless identity were built with David Robinson and Tim Duncan, both No. 1 overall picks and special people. But winning five championships requires much more than a hub. Most famously with Manu Ginobili (late second round) and Tony Parker (late first), the Spurs set a standard for locating unheralded gems, particularly from abroad.

In the other talent-acquisition game of big-ticket free agency, the Knicks now figure to have two max salary slots next summer after last week’s stunning trade of Kristaps Porzingis to Dallas.

As always, they will be selling the sizzle of Manhattan, but if there is a more discerning superstar out there who wants to look deeper, he could begin at the 8-minute-42-second mark of the fourth quarter of the Nets game in Boston on Jan. 28.

Atkinson’s team was trailing by only 7 points when he yanked Russell, who had already scored 25, for the remainder of the night.

Deploying one rookie (Theo Pinson) with a handful of N.B.A. games on his résumé and another (Mitch Creek) signed to a 10-day contract, the Nets fought hard in defeat. Russell later admitted that Atkinson had benched him for dubious on-court decisions. At the same time the coach was sending his point guard a message, he was also saving him for a more winnable game the next night at home against Chicago.

The Nets prevailed over the Bulls as Russell dropped 30. From the not-so-cheap seats, they looked to have a core and a culture — and a clue.