A spectacular overhead kick by Besart Berisha from a cross by Kosta Barbarouses sealed a dramatic come-from-behind triumph in the second A-League elimination final for Melbourne Victory, giving Kevin Muscat's team a 2-1 win over Adelaide United in front of a 15,502 fans at AAMI Park on Sunday evening.

Berisha – who had been a peripheral figure for much of this game before his a acrobatic strike – stuck with just two minutes remaining to keep Victory's season going at least another week and end Adelaide's 2017-18 campaign. 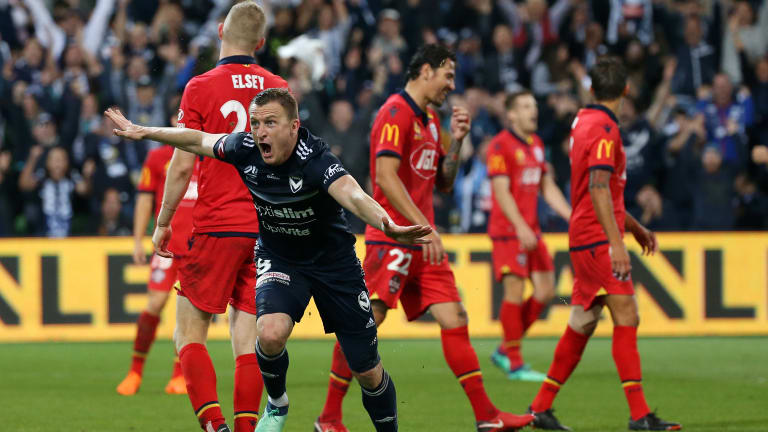 On target: Besart Berisha wheels away in delight after putting Victory 2-1 up against Adelaide in the 89th minute of the A-League elimination final at AAMI Park.

Thus the hope – however slim – for a Melbourne Grand Final remains alive to the penultimate week of the season, as City travel to Newcastle for next Friday night's semi final while Victory are away to champions Sydney 24 hours later.

In truth Berisha had had very little influence on this game until his momentous intervention, but that is so often the way with proven goalscorers, who can be involved only fractionally before making all the difference.

On Wednesday, in an entertaining Asian Champions League match, Muscat had put his faith in youngsters and fringe players in what was an energetic win against Shanghai SIPG.

But for this game – in which the stakes were higher – he brought back the likes of Berisha, James Troisi, Carl Valeri and Leroy George.

Victory, as hosts, were expected to force the pace but it was the Reds who looked more comfortable early, knocking the ball around with their Spanish captain Isais the go to man in midfield. 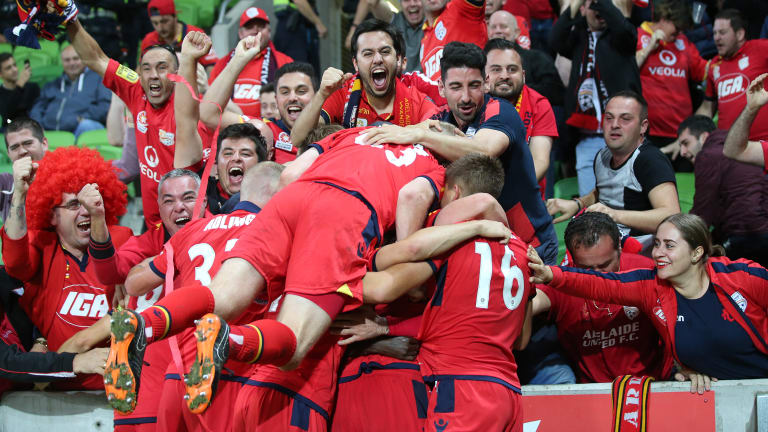 Reds ahead: Nikola Mileusnic celebrates with teammates and away fans after opening the scoring for Adelaide.

It was his through ball in the ninth minute that found Nikola Mileusnic in space, forcing Victory goalkeeper Lawrence Thomas and his defence to scramble the ball clear.

It was a tense rather than thrilling start, and that was the way the first half continued. Victory struggled to find space or create any real chances, while Adelaide was happy to contain their hosts, increase their frustration and take the crowd out of the game.

Ersan Gulum flashed a header wide from a corner as Adelaide pushed forward, while at the other end Reds goalkeeper Paul Izzo dealt easily enough with a free kick from Terry Antonis.

Victory produced the best move of the first half in the 33rd minute when Barbarouses played a brilliant defence splitting pass into the path of winger Leroy George. 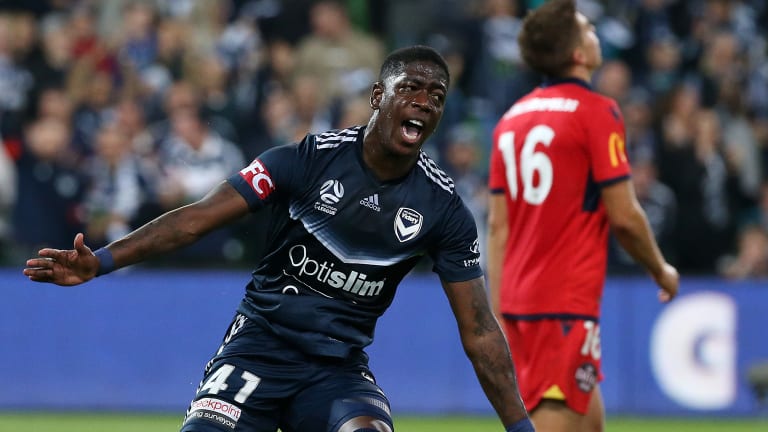 The equaliser: Leroy George puts Victory back on level terms.

The Dutchman bore in on goal only to be denied by a brilliantly timed challenge by Ben Garuccio.The hosts were at this stage getting on top, but Daniel Adlung and Nathan Konstandopoulos were working hard in midfield, shielding Isais and preventing Antonis, Carl Valeri and Troisi creating much for Berisha,

Rhys Williams was booked for a clumsy challenge on Adelaide centre forward Papa Babacar Diawara – Garuccio had also earned a yellow card for fouling Barbarouses – and as the half drew to a close Isais found Garuccio with a delightful pass but the full back's cross ran harmlessly across the Victory area to safety. 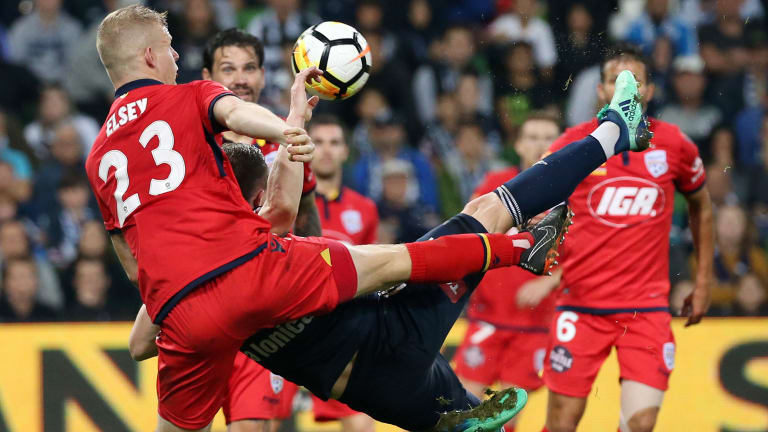 Victory began the second period at a quicker tempo and sought to force the pace, Berisha getting more involved in the first five minutes than he had in the entire first half.

Valeri was booked for a crude challenge on Gulum before a George free kick caused panic in the Adelaide defence.

But the super quick Mileusnic sent Victory a warning of the threat he posed when he sped through on the break only to be denied by a good Williams challenge.

The Adelaide winger did better in the 57th minute when he ran on to a wonderfully flighted quick free kick from Isais, outpaced Williams and then toed the ball past the advancing Lawrence Thomas and into the Victory net.

Victory was back on terms within six minutes, however, with a goal that owed plenty to the creativity of Barbarouses, who skipped past challengers on the right before lofting a cross which George met with his head to direct past Izzo.

Berisha then had a great chance to seal the tie when he was played through by George but Izzo did well to save with his feet.

But the Reds keeper had no answer to Berisha's late acrobatics, and Victory were on their way.