Browns' surprise: Mayfield taken at No.1 in NFL draft

The weight of the Cleveland Browns' history of quarterback purgatory can officially be placed on the shoulders of Baker Mayfield.

Perhaps it's fitting that the Heisman Trophy winner from Oklahoma – a former two-time walk-on who boldly advertises the proverbial chip on his shoulder – will now carry the hopes of Browns fans everywhere after the team took him with the first overall pick of the 2018 NFL draft on Friday morning at AT&T Stadium in Arlington, Texas. 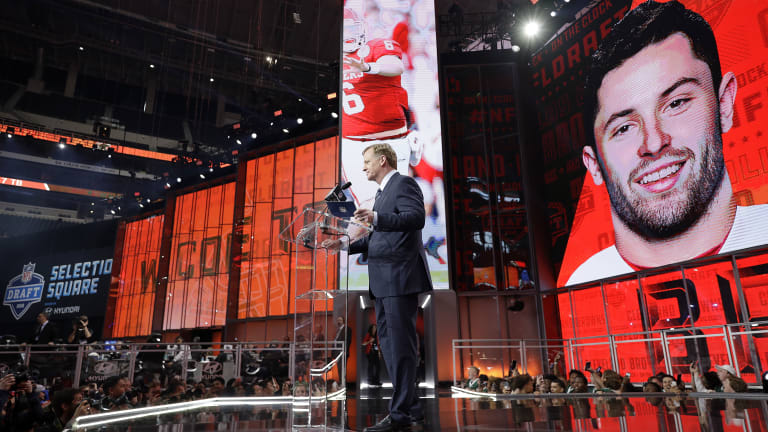 NFL commissioner Adam Goodell speaks after the Browns chose Baker Mayfield at No.1.

Mayfield eventually should become the 30th quarterback to start a game for the Cleveland Browns since the franchise returned as an expansion team in 1999, presumably after Tyrod Taylor – acquired from the Buffalo Bills via trade this off-season – becomes the 29th to do so.

The team has been resolute that Taylor will be the starter in week one of 2018, but considering no Browns QB has started all 16 games since 2001, it's fair to say the clock is already ticking on Mayfield's debut.

Only two of the previous 28 have made it past 25 starts (Tim Couch 59, Derek Anderson 34) with the Browns. Last year's second-round pick, DeShone Kizer, made more starts as a rookie (15) than all but six of the other 27 on the infamous list made in their career for Cleveland, but he was summarily shipped away via trade this off-season to the Green Bay Packers.

No current quarterback on the Cleveland roster has started a game for the Browns, as Cody Kessler and Kevin Hogan were each traded away. In addition to Taylor, the team brought in veteran Drew Stanton from the Arizona Cardinals via free agency.

Mayfield started 47 games during his college career, finishing his time at Oklahoma with the two highest single-season marks in passing efficiency in FBS history (196.4 in 2016, 198.9 in 2017), breaking Russell Wilson's record. 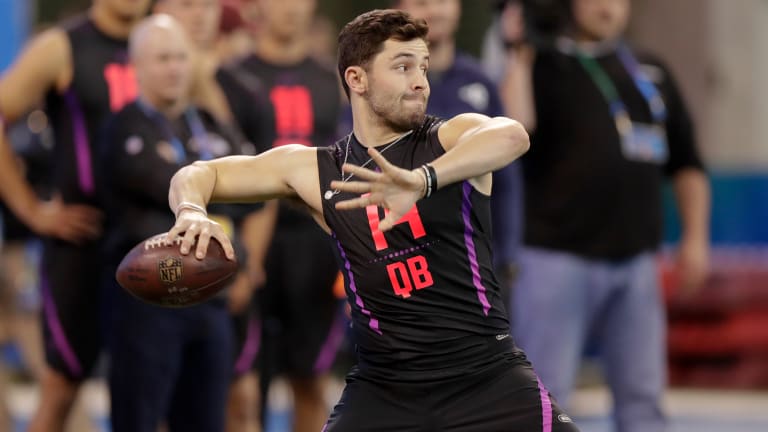 Olahoma quarterback Baker Mayfield was a surprise choice at No.1.

He ultimately beat out plenty of competition to go No. 1, as quarterbacks Sam Darnold of Southern California, Josh Allen of Wyoming and Josh Rosen of UCLA were all widely pegged as possibilities as well.

With general manager John Dorsey keeping quiet all the way up to the draft, Darnold and Allen were each considered the favorite to be the choice at different points over the past several weeks until Mayfield's name gained buzz late Wednesday.

This marked the fifth time the Browns have picked first overall, and the second time Cleveland has picked No. 1 in back-to-back drafts. The team will hope the duo of Myles Garrett (2017) and Mayfield works out better than Tim Couch (1999) and Courtney Brown (2000), both of whom were discarded by the end of their fifth season in Cleveland.

The Browns also picked first overall in 1954, taking quarterback Bobby Garrett out of Stanford. Garrett was traded before ever playing a game for Cleveland, going to Green Bay as part of a package for quarterback Babe Parilli, who lasted just five games (three starts) in one season with the Browns before rejoining the Packers.

Now it will be up to Mayfield to ensure the Browns don't pick that high again for a very long time.