Wallabies prop Scott Sio hopes he has finally buried the injury demons that haunted him last year as he prepares to renew a childhood rivalry with a front-rower who slipped through the Australian rugby cracks.

Sio is set to square off against family friend and junior teammate Mike Alaalatoa for the first time when the ACT Brumbies clash against the Canterbury Crusaders at Canberra Stadium on Saturday night. 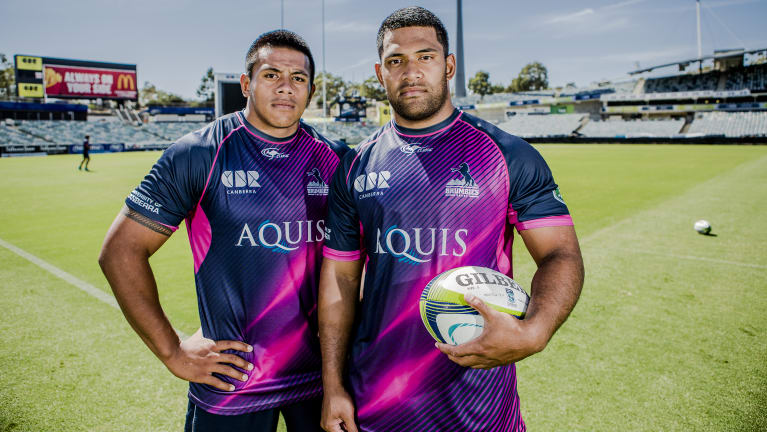 Scott Sio and Allan Alaalatoa will start in the front row and are set for a showdown with Alaalatoa’s brother, Mike.

The pair grew up together in Sydney before their Super Rugby journeys took them down different paths, which led to Alaalatoa having to move to Christchurch to launch his career.

Alaalatoa was snapped up by the Crusaders when he was somehow overlooked by the NSW Waratahs and won a Super Rugby title last year.

Sio was recruited to the Brumbies and is now teaming up with Mike's younger brother Allan as they attempt to plot a path to Australian rugby's first trans-Tasman win in the past 35 matches.

It's a special match for the Alaalatoa family, who designed a “Team Alaalatoa” logo for Brumbies and Crusaders battles.

But the chance to play against Mike is significant for Sio, too, given their families share a rich rugby history and he teamed up with Mike in junior sides.

"It's special for Allan for sure and for me too, I'm looking forward to playing against Mike if he's in there," Sio said. 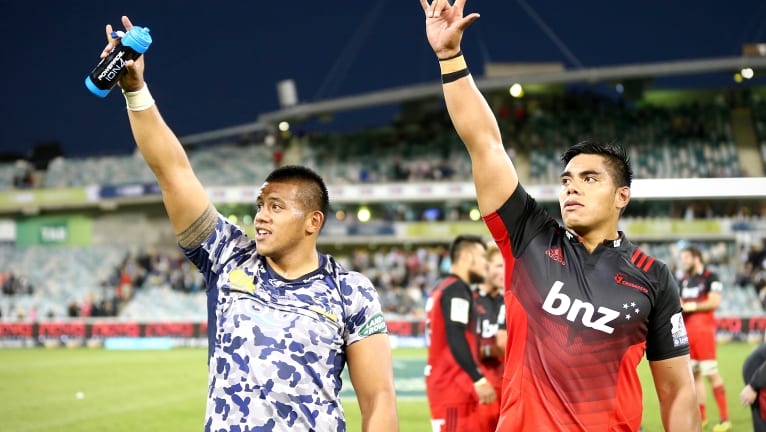 "We grew up playing on the same teams. I'm the same age as Mike and Allan is the same age as my younger brother, Pat. I haven't had the chance to play against Mike so far, so I'm looking forward to it.

"I wasn't on the field when Mike came on in 2016 and I was injured last year, so the opportunity to play against someone you've grown up with will be something special."

Family and childhood battles aside, the the Brumbies will be desperately trying to snap a mid-year form slide which threatens to shatter their Super Rugby aspirations.

They've lost the past two games and are nine points adrift of Australian conference leaders the Waratahs.

Coach Dan McKellar is expected to make minimal changes to his side, despite a shock loss last weekend. The club is also hopeful David Pocock will be fit after battling a niggling calf injury.

Sio says the Brumbies must learn how to "adapt on the run" to resurrect their campaign, urging the young players to embrace the challenge of playing against the most successful team in Super Rugby history.

The Brumbies haven't beaten the Crusaders since 2009 and have lost 12 games in a row against New Zealand teams. Australian teams have lost the past 35 trans-Tasman contests.

"Everything is easier when things are going well, you ride a wave. But you sometimes overlook the little detail," Sio said.

"We're at a point now where we have to really knuckle down and go over every single part of our game. We have to keep learning as a group, implement new things and improve what we're already good at.

"A new week means a new challenge and a new style. What better challenge than playing against the Crusaders, who have been one of the best teams for such a long time.

"What we're lacking at the moment is the ability to adjust quickly when we're out there and adapting on the run. That's where we can learn a lot at the moment."

Sio has battled injuries for the past two seasons, but has finally shaken niggling problems to be getting back to his best around the field and at scrum time.

He played just seven games last year and will already equal that mark in the game against the Crusaders.

"For once my body is starting to hold up. It's good to get big minutes out there to help with our captains and young players," Sio said.

"I've still got a long way to go. I'm still forever learning and I'm looking forward to a really big challenge against Mikey or Owen.

"We know things aren't going to just happen for us. Right now it's about us being better at the individual detail and bringing your individual flair to the game."