Penrith skipper Peter Wallace declared he will return on Friday as the club tries to nurse a whopping $3 million worth of talent back to health. 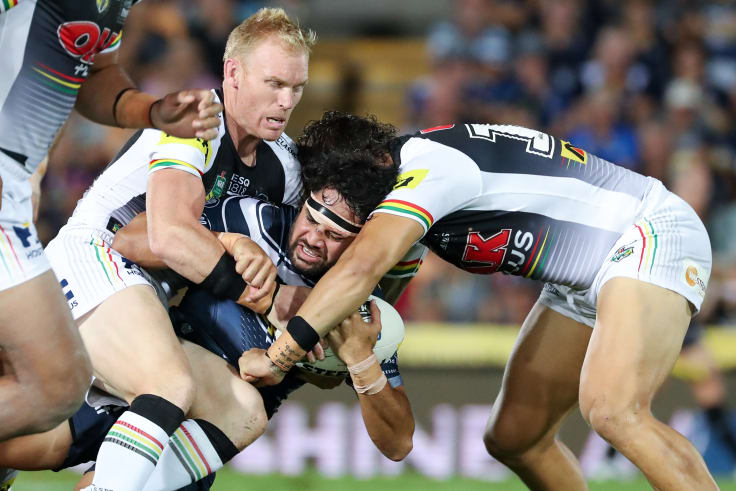 Week off: Peter Wallace will be back to play the Cowboys in Bathurst on Friday.

Fullback Dylan Edwards dislocated his shoulder   in the gutsy 22-14 win over Canterbury and is expected to spend up to six weeks on the sidelines.

But Wallace's return from a pinched nerve in his neck will be a huge boost for the home game in Bathurst against North Queensland. Playmaker Tyrone May, who broke down with an ACL injury late last season, is also a chance to return provided he gets the all-clear from a surgeon on Monday.

Wallace was named to start in the No.9 jersey against the Bulldogs but, with the short turnaround, it was decided he be given a rare week off.

"I'll definitely be back Friday. I had a knock to the neck earlier this year, then it got jammed again last week [against Cronulla] and it pinched a nerve,'' Wallace told Fairfax Media.

"It caused a bit of pain down the shoulder. With the short turnaround and having the cortisone injection on Monday, it was a case of having this week off and getting it right.

"Obviously it will be a big boost if Tyrone is back. He sees the docs on Monday and a decision will then need to be made if he comes straight back with us or gets some game time in the reggies.

"Given our circumstances, he might find himself with us next week.''

May has trained with the main group over the past month, and coach Anthony Griffin hinted on Friday night that he could be eased back via the bench in Bathurst if cleared by the surgeon.

Penrith went through a similar horror injury run in 2015 in Ivan Cleary's final season at the helm.

Wallace broke down with his second ACL injury that season, while another 15 topliners were ruled out at various stages that season and missed a combined total of about 100 NRL games.

This season, the Panthers have had more depth as a result of blooding so many youngsters over the past two years.

They sit second on the ladder despite losing so many key players.

Cleary (knee) could be back in a fortnight, or perhaps for the round-11 Thursday night clash against dad Ivan's Wests Tigers.

Dallin Watene-Zelezniak switched to fullback when Edwards went off after 15 minutes on Friday and is happy to stay there if required by Griffin.

"As I tell everyone, I'll play wherever the coach wants me to play, as long as it's first grade,'' Watene-Zelezniak said.

"If I have to play there I'll play there. I felt alright there on Friday night. I had to pick my times when to use my energy and when to [conserve] it."