Cats coach Chris Scott is shocked at Selwood’s charge and said he would take a lot of convincing not to back a tribunal challenge.

Scott told AFL360 he was proud of the restraint Selwood showed after a bump from Thomas concussed his brother Scott. 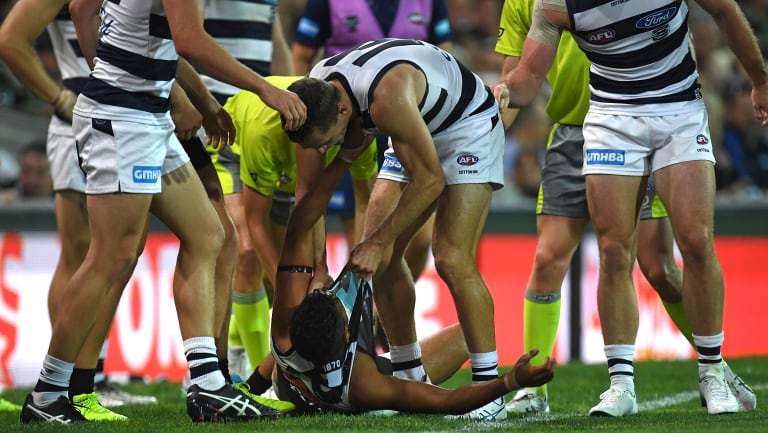 Thomas faces a suspension of three to four weeks for rough conduct, after he ironed out Selwood’s brother Scott with a bump.

Immediately after that incident on Saturday night at Adelaide Oval, the Cats captain remonstrated with Thomas. Joel Selwood and Thomas face one-game bans for striking each other in that scuffle.

‘‘I can’t say I’m any less surprised, having looked at the vision.

‘‘As a football person, you look at it – independent of the fact that his brother’s just been knocked out – and think ’is that worth a week?’

Under the new tribunal system, Geelong also do no risk an extra week’s penalty by challenging the one-game ban for Selwood.

‘‘I can’t absolutely declare that we will challenge it,’’ he said. ‘‘But those smart people (at Geelong) would have to do a really good job of convincing me that I should roll over on it.’’

Scott and his twin brother Brad were a formidable duo in Brisbane’s three-peat premiership team of 2001-03. The Cats coach said he would not have been as restrained as Selwood if that bump had happened to Brad.

‘‘I am proud of him – I played with my brother as well and if I saw that, I’m not sure I would have been as controlled,’’ Scott said.

‘‘He (Joel) honestly believes he didn’t make any contact all – he grabbed his jumper and he had to remonstrate.

‘‘His blood would have been boiling.’’