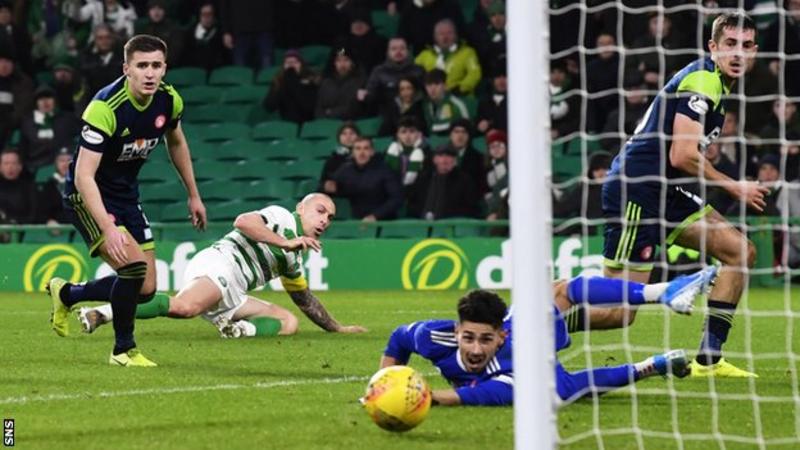 Celtic have moved two points clear at the top of the Scottish Premiership – but only after Scott Brown struck in stoppage-time to snatch victory against Hamilton Academical.

With Rangers spurning a two-goal lead at Aberdeen, Neil Lennon’s side looked poised to take advantage after leading for much of the game through Ryan Christie’s 17th of the season.

However, Marios Ogkmpoe’s 90th-minute strike looked like claiming a point for Hamilton, only for captain Brown’s goal to secure an 11th consecutive win.

It means Celtic go into Sunday’s League Cup final against Rangers having nudged ahead of their city rivals.

Brian Rice’s Hamilton, meanwhile, are left with no reward for a doughty display and drop to 10th, after a ninth game without a win.

Brown answers call when Celtic need him most

This initially had the feel of a dress rehearsal for two completely different shows.

Celtic were warming up for the main event on Sunday – the League Cup final against Rangers. Yes, three points were vital, but a routine victory was certainly expected by the home faithful.

Hamilton have a big game at the weekend too, but for very different reasons. The kitchen-sink drama of a bottom of the table Saturday showdown with St Mirren perhaps the more meaningful tussle for Rice’s side – and a far more realistic prospect in terms of securing valuable points.

A stout defence was required of Hamilton at the home of the champions, but it would be breached in the 13th minute.

Lewis Morgan, again deployed as a striker with Odsonne Edouard again omitted and Leigh Griffiths on the bench, fired in a shot which Hamilton goalkeeper Luke Southwood could only parry. In like a shot was the in-form Christie to eagerly net his fourth in three games.

As usual, Celtic dominated on their home patch, with Hamilton restricted to the most minimal of forays upfield. When Mickel Miller did get into a rare shooting position he could only rattle the seats in Row Z.

Celtic were not making a deluge of chances. James Forrest curled in an effort which looked like it was destined for the net, but it sailed just wide. Minutes later Olivier Ntcham should have made it 2-0 after a defensive mistake in the Hamilton six-yard box, but he skewed his shot the wrong side of a post.

There was a lively to the start of the second half as twice Hamilton would go close. First Lewis Smith loped through on goal and got a shot away that flew low and just wide.

Then an even bigger opportunity for the away side. Miller lofted a free kick into the box and Sam Stubbs got his header on target only for Fraser Forster to claw the ball to safety via a post, with some of the Accies players appealing that the ball had crossed the line.

The atmosphere had changed inside Celtic Park, perhaps due to news filtering through that Rangers were at risk of dropping points at Aberdeen.

The league leaders continued to threaten, mainly through Morgan and Christie, but Kris Ajer should have done better with a header from just four yards out, the ball flying high over the crossbar.

Hamilton had failed to get a shot on target in their previous match away at Livingston. It would take them 66 minutes into this game to make sure there was no repeat of that stat, Scott Martin’s effort from 20 yards was comfortably gathered by Forster. 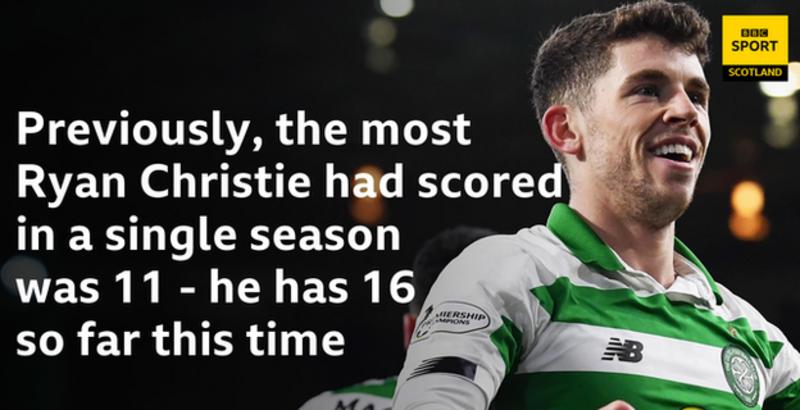 Mikey Johnston entered the fray and it would not take him long to make his presence known, scampering onto a loose ball in the penalty area before planting a shot which came flush back off an upright. Then more carnage in the visitors’ box as substitute Griffiths arrowed a low shot towards goal only for Aaron McGowan to clear off the line.

There was a nervous edge to this game for Celtic in the latter stages as Hamilton remained a threat, with Forster having to tip over a deflected effort, then save from George Oakley. But that did little to ease the nervy atmosphere amongst the home support as the visitors sensed there might be something in this for them.

And so it would transpire in a hugely dramatic finale. First Celtic failed to deal with a ball into the box in the 90th minute and substitute Ogkmpoe swivelled to fire the ball into the back of the net.

The goal stunned Celtic momentarily but their captain would galvanise his shell-shocked troops in the nick of time. Brown gathered the ball on the edge of the box before striding towards goal and firing in a low, diagonal shot which left Southwood with no chance as the stadium erupted in joy.

Man of the match – Scott Brown

It was going to be Christie – another goal and again the main spark that lights up Celtic for the most part as an attacking threat.

But when the chips were down, it was Brown who showed the true mark of a captain as he rode to the rescue with a dramatic and vital winner in injury time.

‘That’s why Celtic are champions’ – reaction

Celtic manager Neil Lennon: “I think subconsciously they [the players] are thinking about Sunday. We’ve got through the game all but by the skin of our teeth, but I thought overall we deserved to win the game.”

Hamilton head coach Brian Rice: “We needed a wee rub of the green, and we didn’t get it tonight, but I’m so proud of what the lads put in. Celtic are champions for a reason and that’s why.”

Attempt missed. Ryan Christie (Celtic) header from the centre of the box is just a bit too high.

Attempt saved. George Oakley (Hamilton Academical) right footed shot from the right side of the six yard box is saved in the bottom right corner.

Leigh Griffiths (Celtic) wins a free kick in the attacking half.

Scott Brown (Celtic) wins a free kick in the attacking half.

Attempt missed. Leigh Griffiths (Celtic) header from the left side of the six yard box is just a bit too high.

James Forrest (Celtic) wins a free kick in the defensive half.

Scott Martin (Hamilton Academical) wins a free kick in the attacking half.

Attempt missed. Michael Johnston (Celtic) right footed shot from the left side of the six yard box is close, but misses to the left.

Attempt blocked. Leigh Griffiths (Celtic) right footed shot from the right side of the box is blocked.

Lewis Smith (Hamilton Academical) wins a free kick in the defensive half.

Michael Johnston (Celtic) hits the left post with a right footed shot from outside the box.

Greg Taylor (Celtic) wins a free kick in the defensive half.

Foul by Will Collar (Hamilton Academical).

Attempt saved. Scott Martin (Hamilton Academical) right footed shot from outside the box is saved in the top centre of the goal.

Attempt missed. Ryan Christie (Celtic) right footed shot from outside the box is just a bit too high.

Attempt saved. Lewis Morgan (Celtic) left footed shot from the centre of the box is saved in the bottom left corner.

Aaron McGowan (Hamilton Academical) wins a free kick in the defensive half.