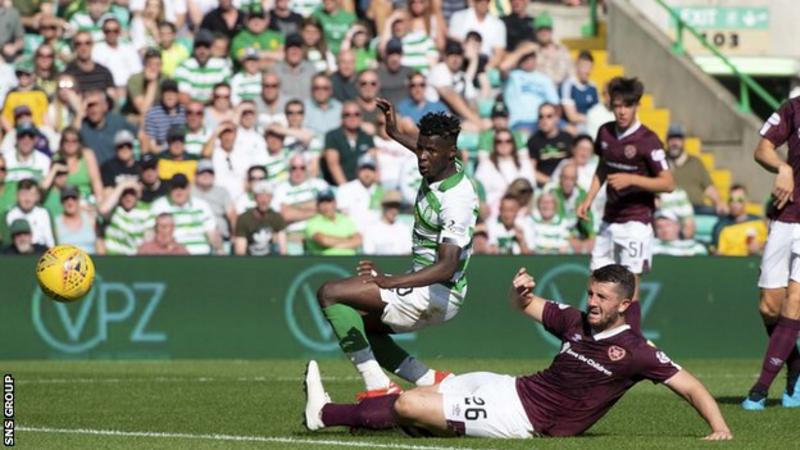 Celtic maintained their 100% start to the Scottish Premiership season with a dominant victory over a tame Hearts side at Celtic Park.

Ivorian striker Vakoun Issouf Bayo appeared to bundle in the opener along with Hearts captain Christophe Berra before later adding a third.

Callum McGregor scored a superb second, drilling in from 25 yards out.

Conor Washington’s late strike, a rebound after Fraser Forster saved his penalty, was only a consolation.

Celtic join rivals Rangers as the only sides to win their opening three games ahead of their meeting at Ibrox next Sunday.

Hearts meanwhile, are yet to win in the Premiership this season and are without a victory in 10 league games stretching back to last term.

In what is a huge week for Celtic with a European tie in Stockholm and an Old Firm match at Ibrox to come, Neil Lennon shuffled his team. Forster started ahead of Craig Gordon, a move that was more about protecting Gordon for AIK than making Forster his new number one. That question will only be answered at the weekend when Celtic visit Rangers.

Lennon gave a start to Bayo, a striker who has had to content himself with just eight minutes off the bench since joining Celtic in January for a reported £2m. Bayo has been waiting a long time, but he worked hard and got his reward. He’ll now return to the margins as Odsonne Edouard and Leigh Griffiths return as the main two, but he did himself some good here.

Hearts offered little. You wouldn’t have expected them to win, or even draw, but they had enough players of experience and pace on the field to pose some problems when the game was still up for grabs. They didn’t. Forster got himself booked after charging out from his goal and fouling Loic Damour but even with Celtic’s defence looking jumpy at times there wasn’t a whole lot more drama for them to deal with until that late penalty.

Including the end of last season this was Hearts’ 10th league game in a row without a win – two draws and eight defeats. In truth, they were lucky to have left with just a two-goal deficit, the first of them coming just before the half hour when James Forrest, playing wide left for a change, chipped in a cross and a combination of Christophe Berra and Bayo turned it into the net.

The second came 10 minutes after the break, Ryan Christie’s simple but astute pass wrong-footing the Hearts defence and opening up space for McGregor to lash a shot past Joel Pereira. The goalkeeper was far from convincing in trying to deal with it. Pereira may have come from the glamour world of Manchester United but he’s not looked convincing in his early games at his new club.

Bayo got the third when Kristoffer Ajer, who not for the first or last time was afforded so much time and space down the right, measured his cross and Bayo did well to get in ahead of Craig Halkett and flick his shot past Pereira. Soon after, he headed on to Pereira’s crossbar. When he was replaced late on, Celtic Park gave him a huge ovation.

There was a crumb of consolation for Hearts when Scott Brown bundled over Sean Clare and Washington scored from the spot at the second attempt after Forster had saved his first effort. Far too little, far too late. Levein will again hear the voices of disapproval from his own fans after this. Lennon, meanwhile, will take his team to Stockholm and then onwards to Ibrox. Who will blink first in the battle of the Glasgow giants? We might get an an answer this week.

The lesser-spotted striker had much to prove after his arrival in January and he delivered an encouraging performance. Limited to small cameo roles so far, this was his first start and he scored his first goal. He claim the opener that may end up going down as a Berra own goal, but there was no doubt later on. A fine finish to top a strong day for the forward.

Uche Ikpeazu (Heart of Midlothian) is shown the yellow card for a bad foul.

(Heart of Midlothian) wins a free kick in the defensive half.

Attempt saved. James Forrest (Celtic) right footed shot from outside the box is saved in the centre of the goal.

Attempt blocked. Uche Ikpeazu (Heart of Midlothian) right footed shot from the left side of the six yard box is blocked.

Penalty conceded by Scott Brown (Celtic) after a foul in the penalty area.

Penalty Heart of Midlothian. Sean Clare draws a foul in the penalty area.

Vakoun Issouf Bayo (Celtic) hits the left post with a header from the left side of the six yard box.

Jamie Brandon (Heart of Midlothian) wins a free kick on the right wing.

Uche Ikpeazu (Heart of Midlothian) wins a free kick in the defensive half.

Boli Bolingoli-Mbombo (Celtic) wins a free kick in the defensive half.

Goal! Celtic 3, Heart of Midlothian 0. Vakoun Issouf Bayo (Celtic) right footed shot from the right side of the six yard box to the bottom left corner. Assisted by Kristoffer Ajer.

Jamie Brandon (Heart of Midlothian) is shown the yellow card for a bad foul.

Aaron Hickey (Heart of Midlothian) wins a free kick in the defensive half.