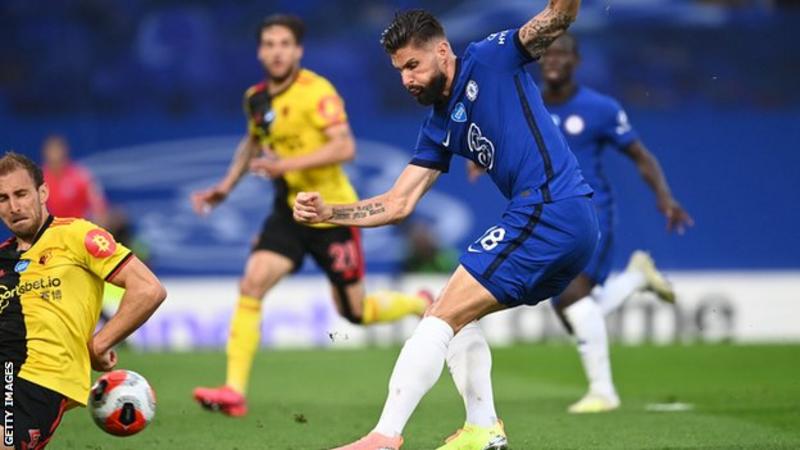 The result lifts the Blues back up to fourth in the table, after they were temporarily leapfrogged by Manchester United.

Nigel Pearson’s side remain a point above the relegation zone but have played a game more than Aston Villa, who travel to Liverpool on Sunday (16:30 BST).

Olivier Giroud opened the scoring for the Blues, latching on to Ross Barkley’s clever pass and steering a left-foot shot into the bottom right corner.

While Watford worked hard to contain the hosts they offered little to suggest they were capable of a first win at Stamford Bridge since 1986.

And they fell further behind before the break, with Etienne Capoue’s rash challenge on Christian Pulisic resulting in a Chelsea penalty that Willian duly converted.

Thereafter it was relatively plain sailing for Frank Lampard’s side, who rounded off the scoring when Barkley found the top left corner from Cesar Azpilicueta’s cross.

The Blues have now won three of their four games since the top flight resumed in June.

Manchester United’s thumping victory against Bournemouth had seen Chelsea drop out of the top four places for the first time since 26 October.

But this was the perfect response from Frank Lampard’s side who were brimming with energy throughout and appeared galvanised by Wednesday’s lacklustre defeat at West Ham.

The Blues made four changes to their starting XI and looked considerably more assured defensively while Willian – who scored a penalty in his third consecutive game – Barkley and Pulisic provided the thrust going forward.

England midfielder Barkley was particularly impressive, demanding the ball in tight areas and then restricting his number of touches to get out of trouble and maintain Chelsea’s attacking momentum.

Chelsea’s opener was the perfect example as he controlled and swivelled away from a defender in one movement and then sliced open the Watford defence with his next touch.

Barkley, who played more attacking passes (47) than any of Chelsea’s other front six players, also capped a fine individual performance with his first Premier League goal of the campaign late on.

Attempt blocked. Christian Pulisic (Chelsea) left footed shot from the left side of the box is blocked. Assisted by César Azpilicueta.

Callum Hudson-Odoi (Chelsea) wins a free kick in the defensive half.

Attempt missed. Ruben Loftus-Cheek (Chelsea) header from the left side of the six yard box is high and wide to the right. Assisted by Reece James with a cross.

Attempt saved. Danny Welbeck (Watford) right footed shot from the centre of the box is saved in the bottom right corner. Assisted by Nathaniel Chalobah.

Attempt saved. Adam Masina (Watford) left footed shot from outside the box is saved in the bottom left corner.

Will Hughes (Watford) wins a free kick in the attacking half.

Ross Barkley (Chelsea) wins a free kick in the attacking half.

Foul by Will Hughes (Watford).

Attempt missed. Craig Dawson (Watford) header from the centre of the box is too high. Assisted by Will Hughes with a cross following a set piece situation.

Attempt saved. Adam Masina (Watford) left footed shot from outside the box is saved in the centre of the goal. Assisted by Nathaniel Chalobah.

Olivier Giroud (Chelsea) wins a free kick in the defensive half.

Attempt saved. Kurt Zouma (Chelsea) header from the centre of the box is saved in the bottom right corner. Assisted by Willian with a cross.

Attempt saved. Willian (Chelsea) right footed shot from outside the box is saved in the bottom right corner. Assisted by Ross Barkley.

Attempt blocked. Olivier Giroud (Chelsea) left footed shot from the centre of the box is blocked.