Crusaders back on top with bruising win over sorry Blues

The Blues' woeful record in Kiwi Super Rugby derbies has continued with a bruising 32-24 loss to the Crusaders in Auckland.

The visitors reclaimed top spot on the overall table with an eighth-successive win, scoring all four of their tries in Saturday's first half which they dominated.

The Blues roared back in the second spell, inspired by the brilliance of All Blacks winger Rieko Ioane, but couldn't prevent a 17th-straight New Zealand derby without success. 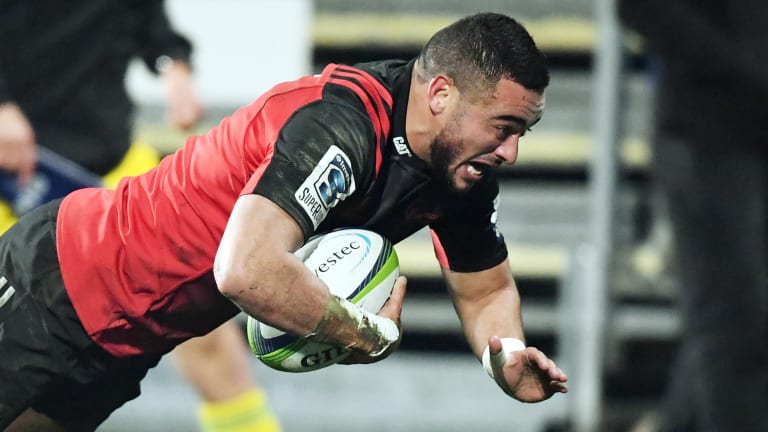 Bryn Hall was among the try-scorers for the Crusaders.

The Crusaders improved their record to 10-2, heading into a table-topping showdown next week with the Hurricanes (10-1) in Christchurch.

Their pack was at the heart of their early control, largely setting up tries to George Bridge, Quinten Strange, Matt Todd and Bryn Hall.

Strange was shown a yellow card after the break for a lifting tackle on veteran Jerome Kaino.

The Blues, without a win this year at Eden Park, slumped to 3-9 and almost out of playoff contention although they showed more improvement.

An electric Ioane crossed twice and set up the two other tries to Matt Duffie and Michael Collins.

Coach Tana Umaga, reappointed this week for a further season, will target looming home matches against the Melbourne Rebels and Queensland Reds as a chance to challenge for a top-eight spot.

Both teams will be concerned about injuries, with three players forced off in the first half after failing head injury assessments.

Nor did Crusaders midfield back Ryan Crotty, whose concussion history will be an increasing concern to the 29-year-old and the All Blacks' selectors.

Parsons exited after an apparent forearm to the head from Crusaders prop Owen Franks which might attract the attention of the citing official.