DANA WHITE is no stranger to bumping heads with his UFC fighters.

The American promoter has been hailed for transforming MMA and the UFC brand to become a direct competitor against boxing. 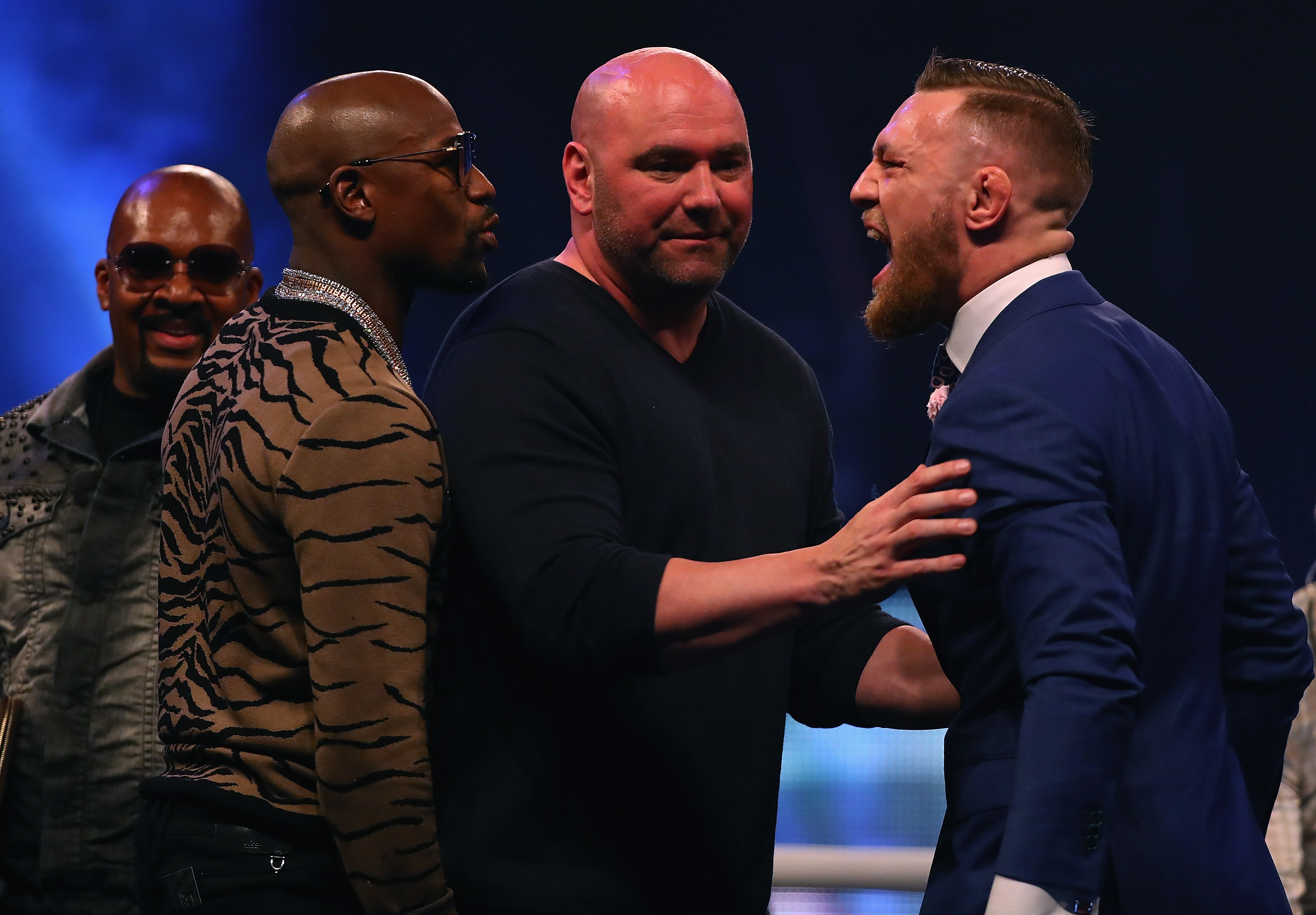 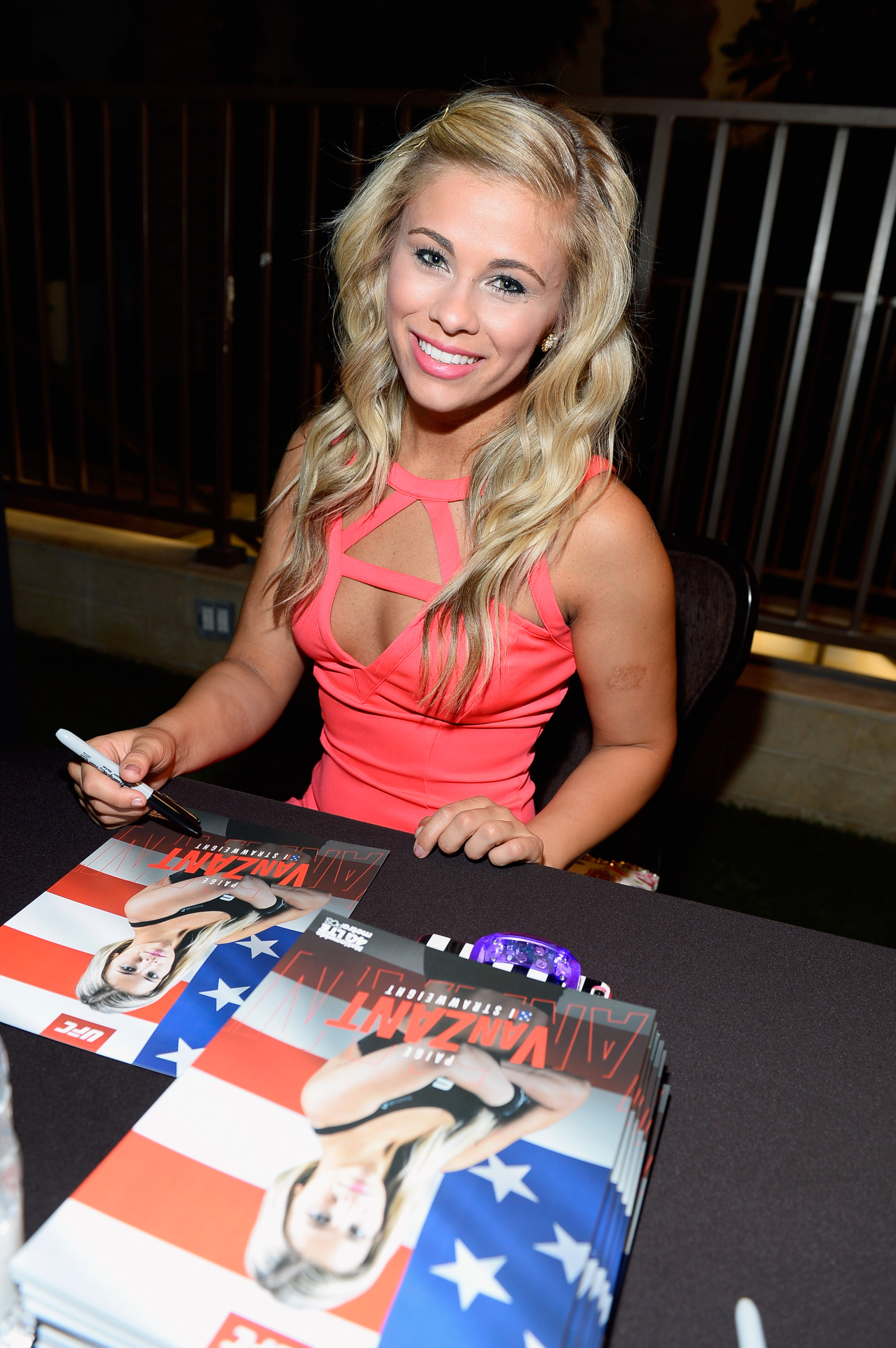 But it has not all been plane sailing for White.

He is not afraid of speaking out against his talent while also never looking to retreat once being attacked.

Paige VanZant is the latest who has felt White's wrath.

After once being in his inner circle, she now finds herself cast aside by the UFC president after a disappointing defeat at UFC 251.

It looks like the glamour girl of the UFC's days in the organisation are over.

After a comprehensive defeat to Amanda Ribas, her last fight on her contract, it appears a renewal isn't open for discussion with White, who has discarded his former favourite fighter.

Rows over pay have soured their relationship, with VanZant eager for a bumper contract that reflects her newfound celebrity status.

White even fired a parting shot at VanZant in a press conference after the Ribas loss, citing her lack of progress and injuries as a reason for deliberations over a new deal.

He said: "When you talk all that stuff, ‘I’m not being paid enough,’ and you’re fighting inconsistently, one time in the last year, (suffering) injuries, and then got smoked in the first round of the fight? 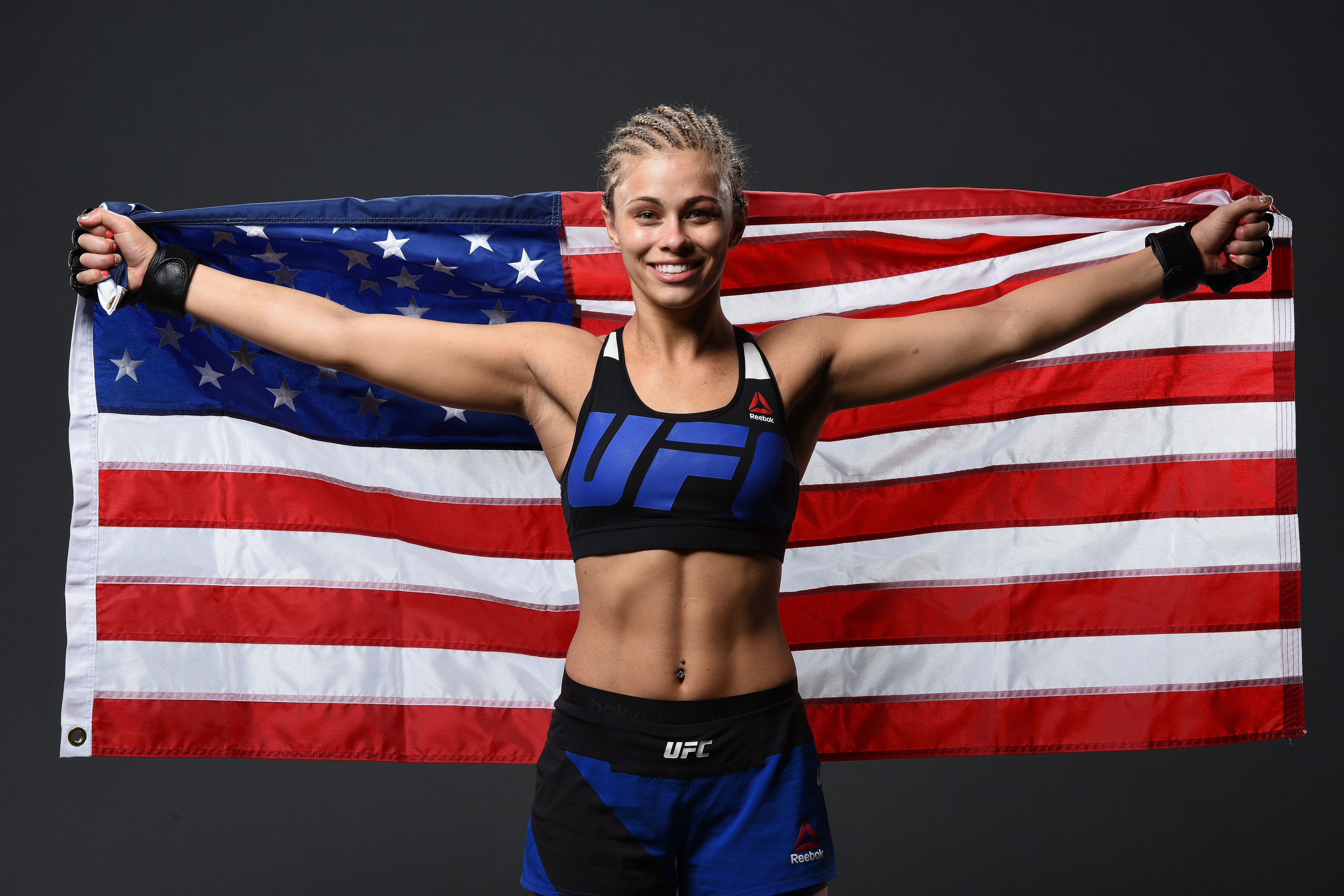 In the latest of a long-running feud between the promotion's light-heavyweight champion and president, White accused Jones of wanting $30million to step up to heavyweight to face Francis Ngannou.

Jones has flat out refuted the claims and instead called his boss a "liar" –  even daring him to terminate his UFC contract.

But their feud has been brewing over the years, due to the two-time champion's out of cage misdemeanours – which included failed drug tests, a hit and run and a positive cocaine test.

When Jones was pulled out of facing Daniel Cormier UFC 200 in July 2016 on just two days notice after a doping violation, White claimed he would never again headline an event.

That proved untrue, as he returned a year later to beat Cormier – later overturned to a no contest following another failed test – before main-eventing his four other fights since.

White still classes Jones as the greatest of all time, but believes his talent has been wasted following years spent on the sidelines through suspensions and personal troubles. 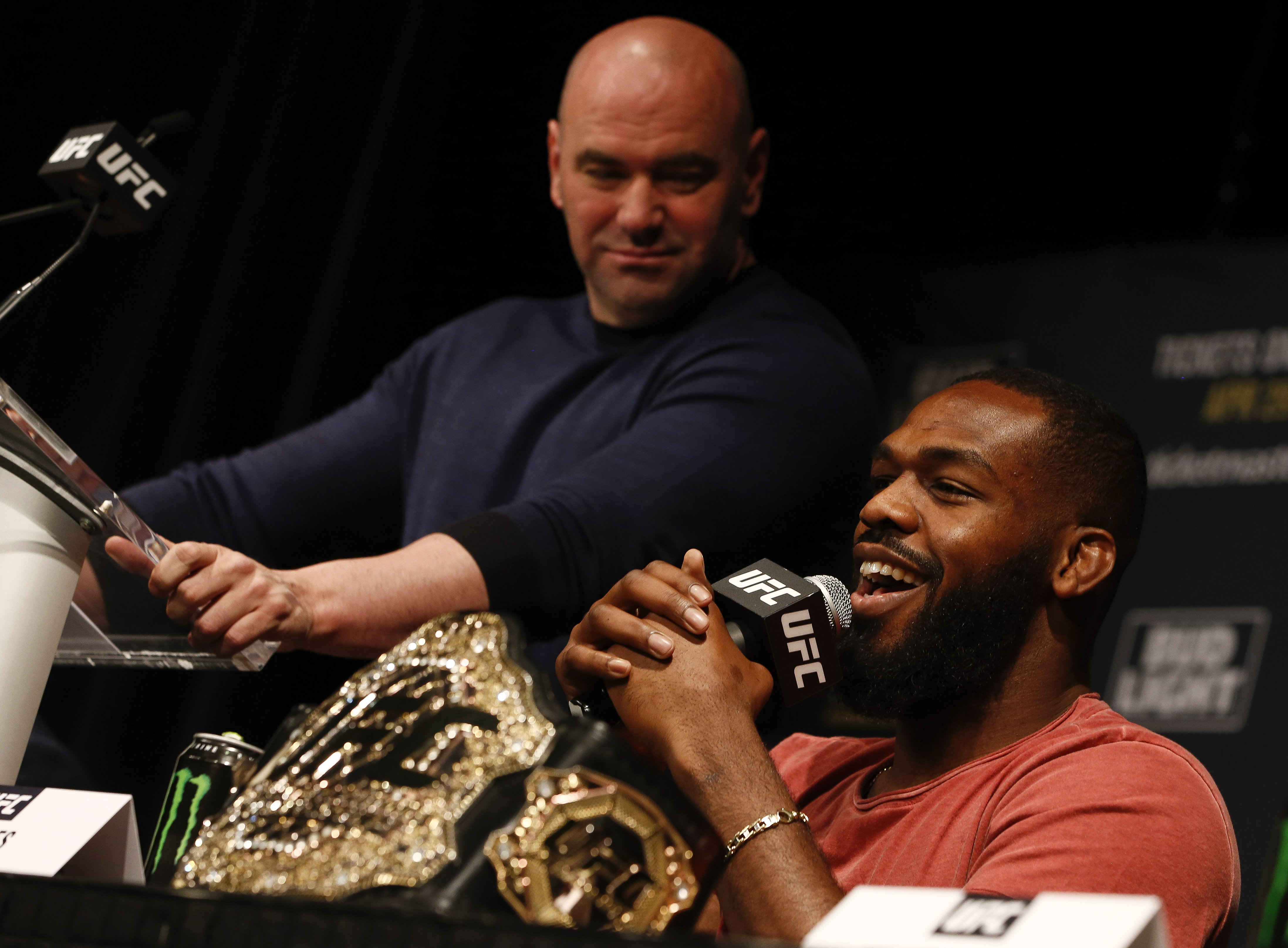 For the most part, White has supported and backed McGregor on the way to the Irishman becoming the sport's biggest star.

But even the UFC's golden goose has landed himself in some in-house troubles.

McGregor was set to headline UFC 200 four years ago, but after refusing to turn up to the pre-fight press conference – citing it was a distraction from his training camp – the southpaw was pulled from the event.

After throwing his toys out of the pram and announcing his 'retirement' on Twitter, he would instead kiss and make up before beating Diaz at UFC 202 in August.

Fast forward two years and White was left fuming after McGreogor attacked a UFC bus, with Khabib Nurmagomedov inside, with the aftermath causing six fights to be axed.

White said on the incident before UFC 223: “This is the most disgusting thing that has ever happened in the history of the company." 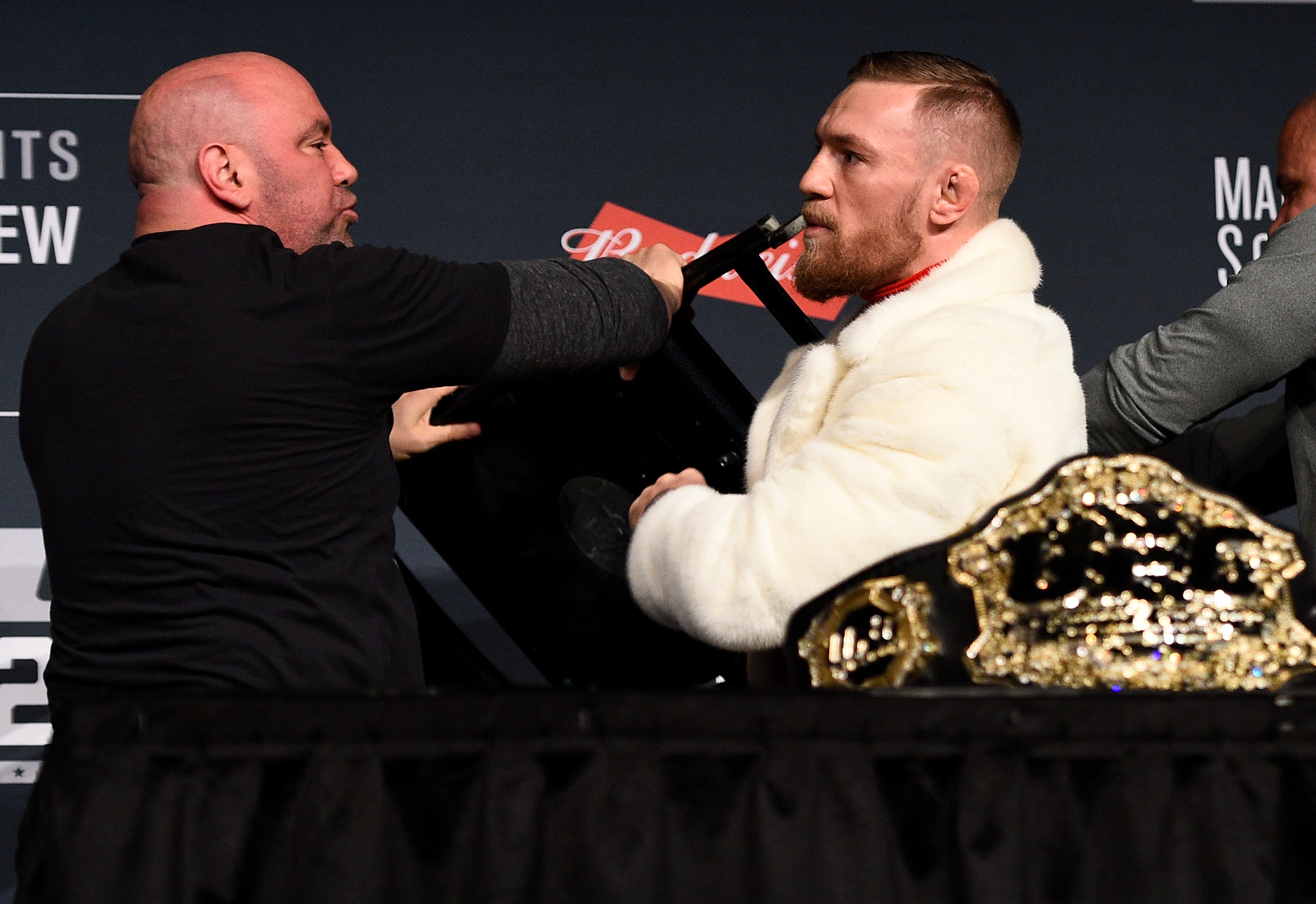 Ortiz and White have a long history dating back to the UFC's early days.

White used to manage the legendary light-heavyweight, but after he became the company's president, their relationship soured.

As tensions brewed, Ortiz wore a T-shirt at UFC 89 which read: “Dana Is My Bitch”.

Their relationship got so bad Ortiz only agreed to re-sign with the UFC in 2007 if he contract included a three round boxing match with his boss.

White – a former amateur boxer – agreed, and trained for months after hiring a trainer with the Nevada State Athletic Commission brought in to oversee the event.

Amazingly, it was Ortiz who pulled out of the bout, failing to show up to the weigh in a day before the proposed fight, insisting he was not being financially compensated for the exhibition. 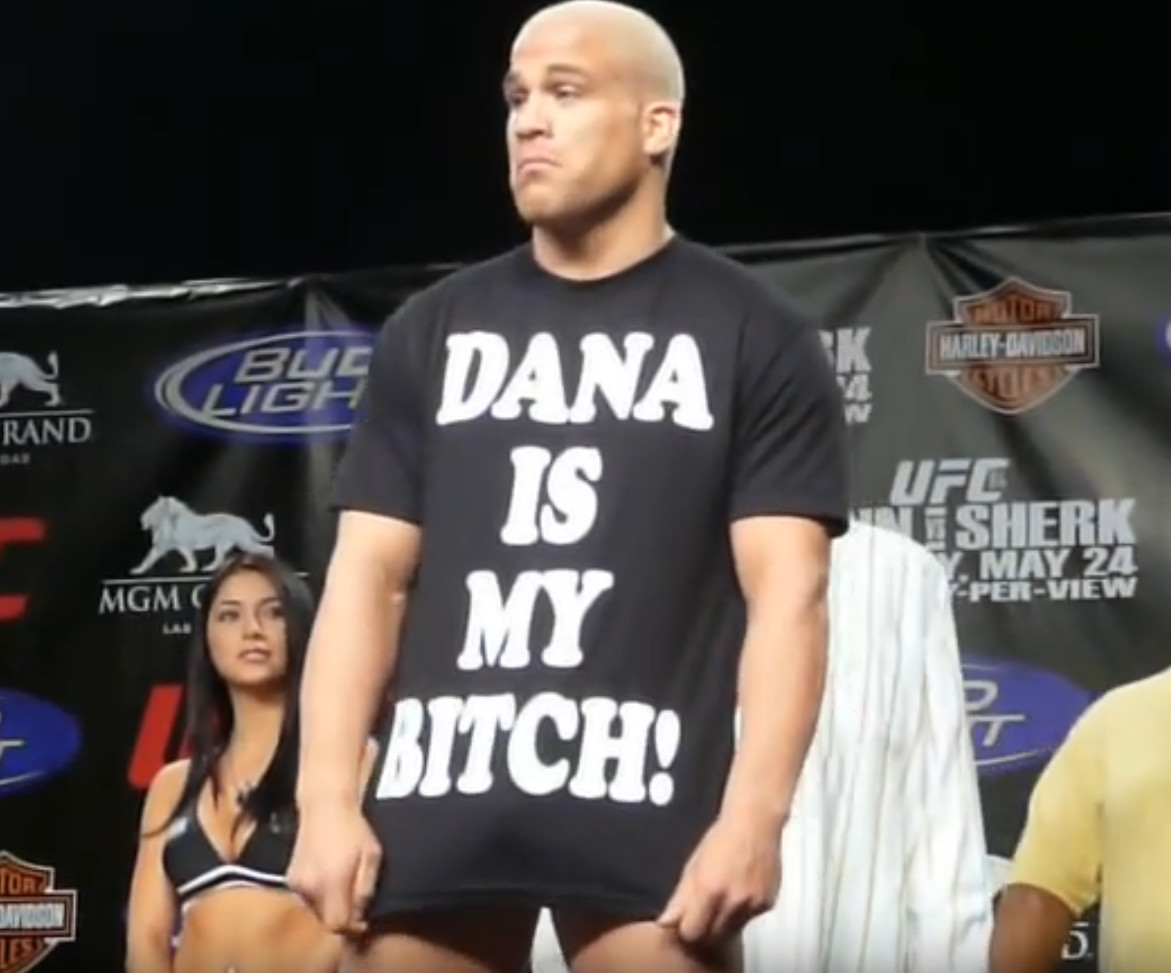 For years the UFC failed to take an interest in Cyborg, who was desperate to face Ronda Rousey.

White even publicly shamed the Brazilian for her prior failed drug test and claimed she looked like heavyweight Wanderlei Silva.

He said in 2014: "Walking up the stairs, jacked up on steroids beyond belief, and looking like Wanderlei Silva in a dress and heels."

Two years later, as Rousey left the UFC, Cyborg came in and soon became the most dominant women fighter in the promotion.

But by 2019 their relationship was over, as White accused Cyborg of refusing to rematch Amanda Nunes.

Cyborg then doctored a video which was edited to show White admitting he was lying, which the ex-champ later admitted was faked, as she then signed for rivals Bellator.

Woodley found himself public enemy No1 among the UFC brass after claiming he was the worst treated champion in the promotion's history.

He then claimed race was a factor in his popularity, as he said in 2017: "Let's put the cards on the table – real is real, if I was a different complexion, I think people and fans would treat me a different way."

Woodley's public outburst did not go down well with White, who accused the welterweight of boring fans after his points win against Damian Maia.

Woodley would lose his shot at fighting legend Georges St Pierre, with Michael Bisping instead defending his middleweight title against the legendary Canadian.

Despite Woodley suffering several injuries leaving him unable to defend the UFC belt, his relationship with White appeared to have improved in the years following. 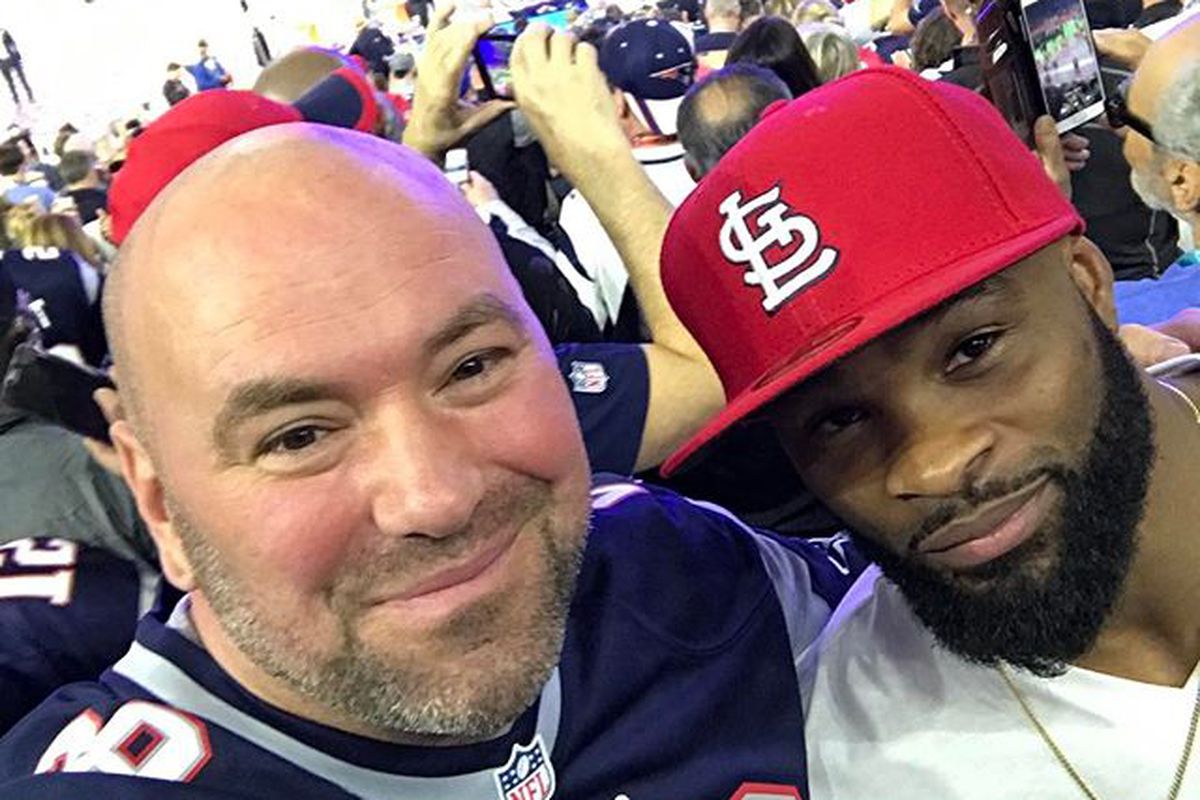 When Covington beat Dong Hyun Kim in Singapore in 2017 to go on a four-fight win streak, he was told by matchmaker Sean Shelby his time in the promotion would be up after his next bout.

He then turned into the hated face of the UFC as he transformed into a trash talking specialist – with White one of many on the receiving end of Covington's several verbal onslaughts.

Before the American grappler prepared to face Kamaru Usman for the welterweight title last December, Covington said: “I can tell you who’s not wrapping it around my waist, and that will not be Dana White.

"If he tries to wrap it around my waist, I’m gonna take the belt from him and slap him in the face with it.”

Covington lost the fight, but remains a top welterweight contender. 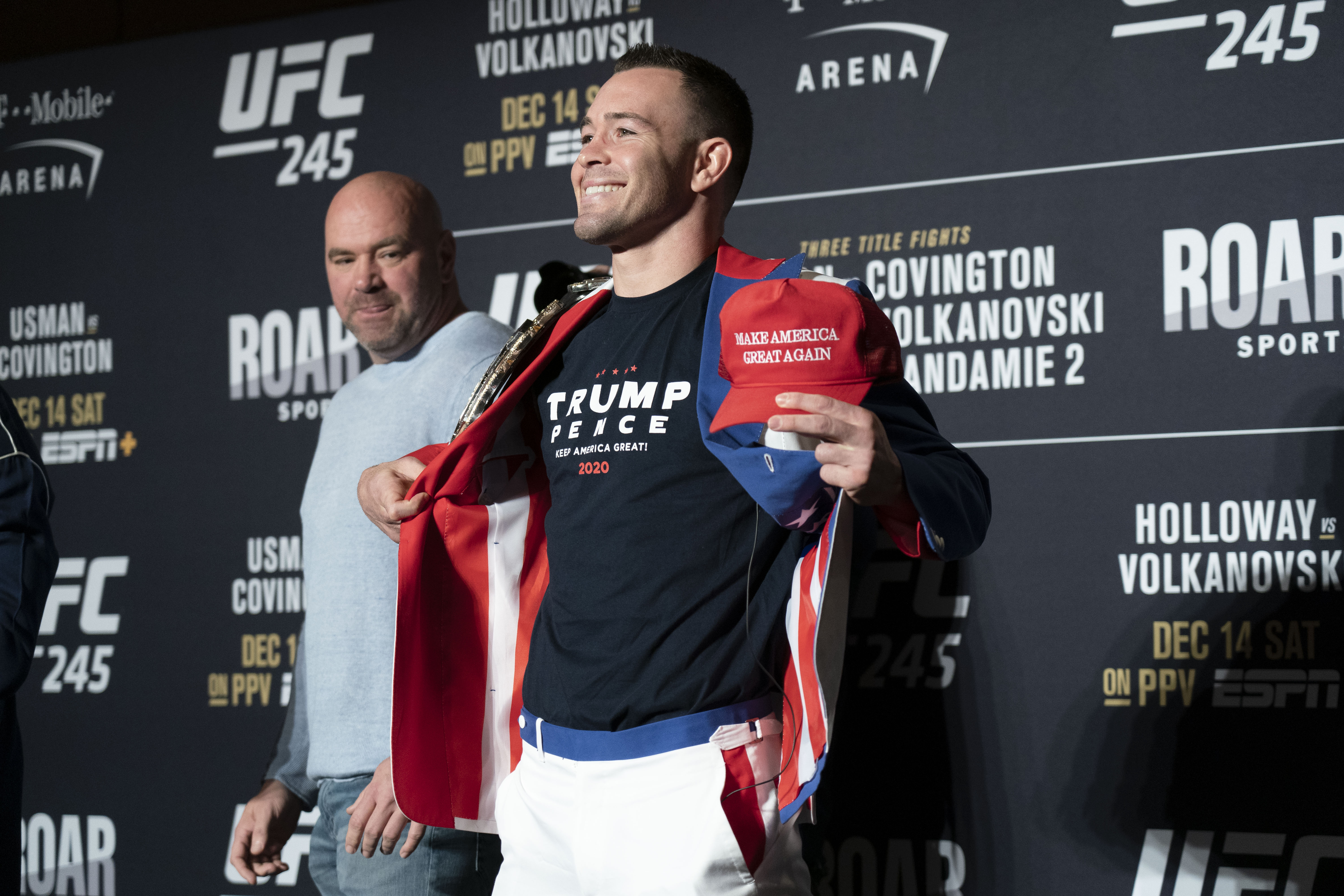 St Pierre held the welterweight title over five years and nine defences in his second reign as champion, but his last fight ended on a bitter note.

White was left disgusted with the judges decision at UFC 167 in 2013, believing Johny Hendricks was robbed, and blasted GSP for deciding to retire without offering a rematch.

St Pierre would return four years later, moving up to middleweight, but his contract included a stipulation for him to face Robert Whittaker if he won.

But, after GSP did win, and held the middleweight title hostage, he again walked away from the promotion vacating a belt in the process.

White was left unimpressed but not surprised as he insisted St Pierre's fighting career was over.

The promoter even blocked GSP returning against to fight lightweight champion Khabib last year, fearing he would again walk away from the title he had just won. 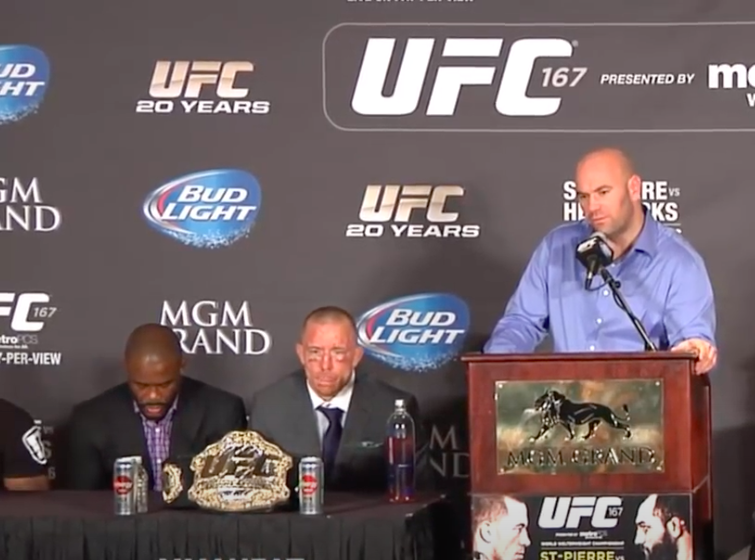 Silva was considered the best fighter in the UFC heading into his 2010 fight against Maia.

But after failing to engage with Maia during the championship rounds, instead showboating and prancing around, White slammed the Brazilian post-fight.

He said: “The arena tonight was incredible. The energy was amazing, and to end it the way that we did was an embarrassment for me, the Fertittas, the UFC and the sport in general.

“I apologise, and I will – I don’t know how yet – but I will make this up to the fans who bought this tonight.”

Years later, when Silva filled in at UFC 200 on 48 hours notice, he was booed by fans for again failing to excite in the cage – but it was the middleweight icon who was this time upset with the boss for a lack of support.

Silva said: “I will say it again: I’m really disappointed with the way they have treated me, very upset with all that." 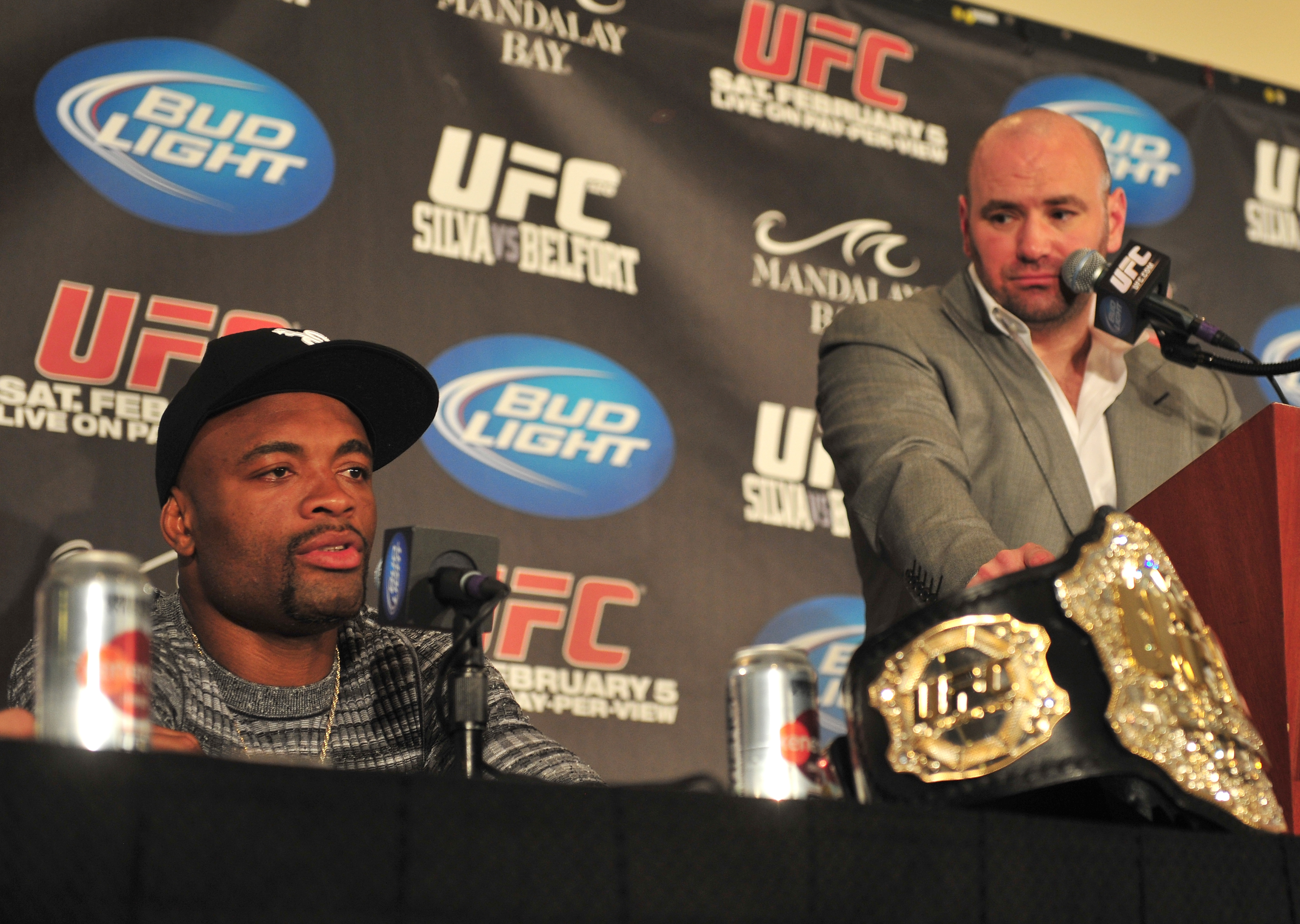