HOUSTON — The PGA Tour does not have a 72-hole stroke play event this week, and several weekend college football games, including the marquee matchup between Michigan and Ohio State, have been canceled or postponed because of the coronavirus, leaving the best female golfers in the world well positioned to fill the TV viewing void.

This weekend, the L.P.G.A. contests the United States Women's Open, its most lucrative major tournament, pushed back six months from its original date by the pandemic, on a stage cleared of some of the usual obstacles that can overshadow women’s golf in America. The spotlight it offers is in many ways tailored for Ariya Jutanugarn.

Jutanugarn, a former women’s world No. 1 from Thailand, generates tremendous clubhead speed and can produce birdies in bunches when she gets on a roll. But Jutanugarn, 25, tested positive for coronavirus before an L.P.G.A. event in Florida last month. In her final practice round this week, she did not look like the same player who was crowned Open champion in 2018 or even the same one who tied for sixth during an L.P.G.A. stop in Georgia in late October.

Playing the back nine of the Cypress Creek course in a group that included her older sister, Moriya, 26, Jutanugarn consistently fell a few paces behind the others because of what she described as a lingering effect of the virus.

“Every time when I play I walk really slow because my heart rate is up so high. But I just have to deal with it.”

A month after her diagnosis, she continues to grapple with fatigue and headaches. The barbecue for which Texas is famous, a staple in players’ dining, is largely lost on her because she hasn’t regained her sense of smell or taste.

“It’s tough because I know my body isn’t 100 percent yet,” Jutanugarn said. “I just have to deal with it and do my best, and make sure I take good care of my body.”

They’re playing in a Christmas-themed bubble.

The poinsettia centerpieces on the Nos. 1 and 10 tee snack tables don’t fool the players. They are acutely aware that Christmas isn’t quite here yet.

“Coming into these two weeks, this past week or two that I was home, I was like, ‘OK, I’m going to be in a bubble,” said Lexi Thompson, the No. 11-ranked player. “I’m not taking the chance of testing positive coming into the two most important weeks of the year.” 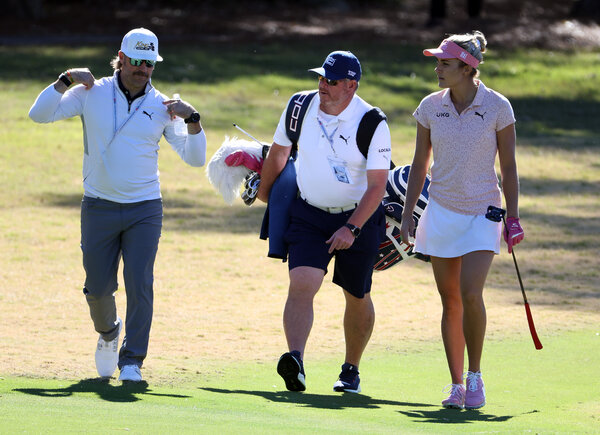 Still, it’s 2020. So despite the best made bubbles, stuff happens. On Wednesday, the United States Golf Association announced that Andrea Lee, who had tested negative for the coronavirus before the Volunteers of America Classic outside Dallas and spent last week ensconced in the L.P.G.A. bubble, tested positive for the virus upon arriving in Houston and had withdrawn from the Open.

Jutanugarn breathed a sigh of relief Monday after passing her pre-event coronavirus test. Despite being in a featured group alongside two other former champions, Inbee Park and So Yeon Ryu, Jutanugarn said her expectations were low.

In her return to competition after quarantining, she finished tied for 62nd. Moriya, who had tested positive at the same time as her sister, also made her competitive return at the Volunteers of America Classic and tied for 16th.

“Last week when I walked 18 holes I passed out because I was so tired,” Ariya Jutanugarn said.

All is not necessarily lost. Last month, Dustin Johnson won the rescheduled Masters a month after testing positive for the coronavirus in a pretournament test. Like Jutanugarn, he isolated for at least 10 days and returned for the final tuneup event.

On Masters Sunday, Jutanugarn said, she turned on the TV, intending to watch Johnson’s final round. But she was feeling feverish and her head was throbbing. “I fell asleep for four hours, I woke up and he had finished,” she said.

It’ll take two courses to get the full field in before dark.

The challenge for Jutanugarn, and the rest of the Open’s competitors, is compounded because this year, for the first time, the tournament is being played on two courses to accommodate a full 156-woman field in fading winter daylight.

Cypress Creek, where three of the four rounds will be contested, is long, with massive greens. The second course, Jackrabbit, where each contender will play one of the first two days, is a tighter layout, with contouring around the smaller green complexes. To play both well requires the versatility of a Formula One driver who could also be competitive in NASCAR.

Stacy Lewis, a two-time major winner who is a member of Champions Club, knows both courses well. “I think in everybody’s head you say, ‘We’re going to play Cypress three times, my focus is going to go that way more than the other one,’” she said. “And then you have a bad day on Jackrabbit and you’re not even playing the next two. I know people have asked me and I’ve told them, ‘Pay attention to Jackrabbit.’”

There’s a lot of money on the line this weekend and next.

The next two weeks have the players’ full focus. Both the U.S. Women’s Open and next week’s finale in Florida offer a winner’s check of at least $1 million. The U.S. Open will pay out $5.5 million and the purse for the Tour Championship will be the fifth-highest in the women’s game this year at $3 million, a haul that makes this stretch comparable only to the mid-August-to-September span during which two other majors — the Women’s British Open and the AIN Inspiration — were contested.

“To be honest, it feels weird because I’m playing in December around Christmas Day, so it’s the first time,” said Jin Young Ko, the women’s world No. 1. “But the course is tough and then everyone look nervous, too, so it’s fun.”

Fun? Danielle Kang, who has won twice since the tour’s July restart, is accompanied this week by her boyfriend, Maverick McNealy, who plays on the PGA Tour. McNealy is one of several male players, including major winners Jason Day and Bryson DeChambeau, who have thrown their support behind the L.P.G.A. this week by posting messages on social media with the hashtag #Womenworthwatching. DeChambeau’s regular caddie, Tim Tucker, is moonlighting this week on the bag for Lexi Thompson.

Asked the best piece of advice that she has received from McNealy, Kang, a one-time major winner, said, “Just relax. It’s the U.S. Open. Everyone is stressed out.”