St George Illawarra vaulted back to the top of the NRL ladder with a backs-to-the-wall win over arch rivals the Roosters in an enthralling Anzac Day clash at Allianz Stadium.

Just five days after suffering their first loss of the season against the Warriors and with only one meaningful field session under their belt since, a steely Dragons absorbed a mountain of Roosters pressure and rode a Ben Hunt masterclass to topple the Tricolours 24-8. 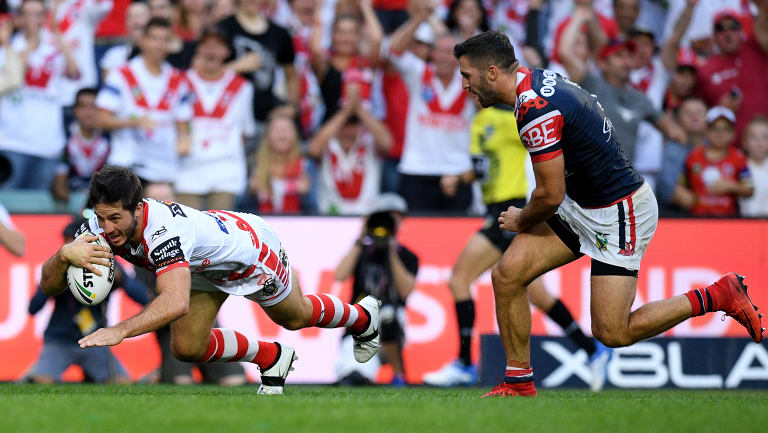 Ben Hunt scores a try in the Dragons’ 24-8 victory.

From there, it was all Roosters. And after practically six sets of hammering a Red V wall, they opted for a penalty goal to reduce the margin. Dragons players celebrated like they had won at the mere thought, a little victory which seemed so much bigger.

At the end of it all, Hunt struck what seemed a hammer blow. Moments after Jason Nightingale had swept upfield as the Roosters threw astray deep on the attack, Hunt jinked over with 20 seconds left before the siren.

Hunt had a hand in the Dragons' first early in the second half as Widdop sent Sims, who had a target painted on Cronk all day, barrelling over the halfback to stretch St George Illawarra's lead to 16.

But you always felt like there was a twist left. Latrell Mitchell raced onto a Keary grubber and grounded the ball with inches to spare to spark the contest again. But it never did really catch alight after that. And the Dragons confirmed they're the real deal.