Look, it was such fun. Cracking game, cracking atmosphere, another emphatic win for England, yet a night few Kosovans will ever forget. Only a curmudgeon would not have left St Mary’s without a great big smile, heading into the night.

Yet once we have all stopped chuckling, an undeniable fact remains. Defend like this against a good team, against one of the contenders for the European Championships next summer, and England have no chance. Not. A. Prayer. They may well have the most dynamic forward line in European football, but those lads cannot be expected to score four goals every time in the finals, as well as the qualifiers.

And they will need to, if this is the standard. England were a goal down after 35 seconds and, leading 5-1, contrived to lose the second-half 2-0, even if Harry Kane did miss a penalty. 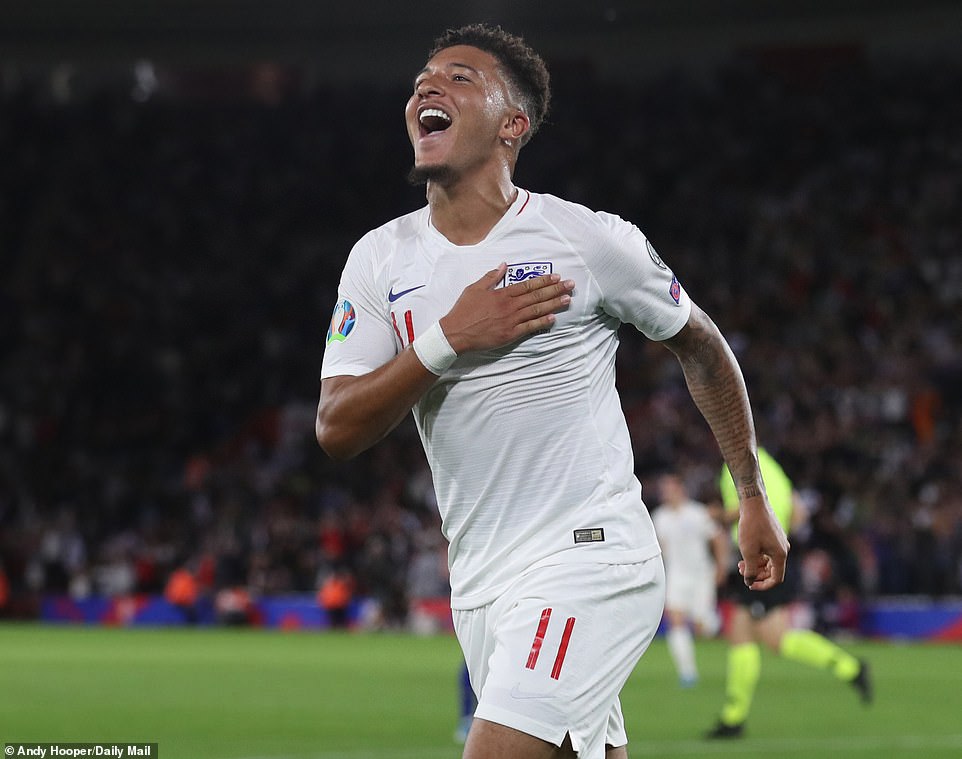 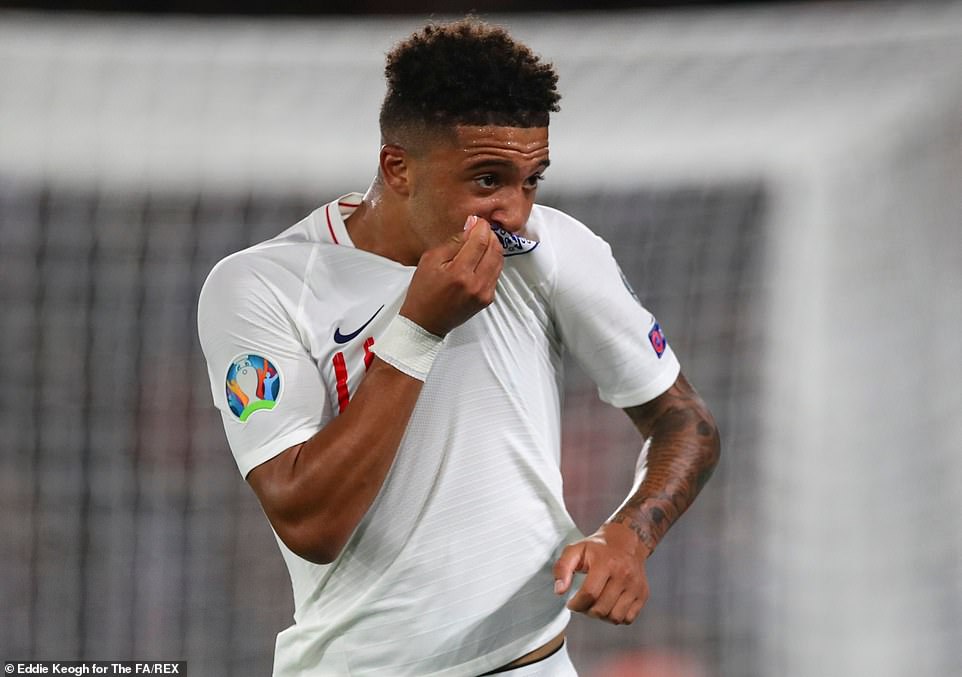 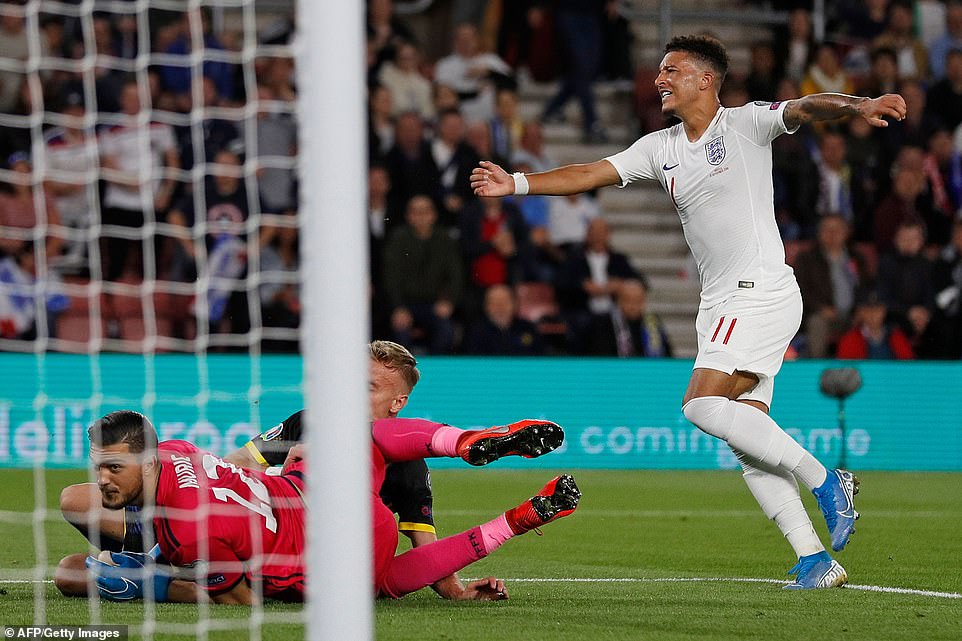 Those who see a glass as half full may have loved every second but coaches are not like that. Jose Mourinho used to stop any training match that went to 3-3, describing it as a hockey score. Southgate won’t feel all that differently about the errors England made at the back, certainly after similar mishaps at the UEFA Nations Cup finals.

The game was as good as won when Declan Rice gave the ball away sloppily to allow Kosovo the counter-attacking initiative after 49 minutes. Verdat Muriqi played it to Valon Berisha, Jordan Henderson was hopelessly out of position and Kosovo pulled one back. No need to panic, but Harry Maguire did, getting into a terrible tangle attempting a routine defensive block that ended with him grounded and felling Muriqi, who also took the penalty and brought Kosovo to within two goals.

When Ross Barkley was fouled, Kane’s penalty was saved by Arijanet Muric, and Raheem Sterling hit a post, but near misses will not worry Southgate as much as near chaos at the back. It might not matter now but, one day, it most certainly will. 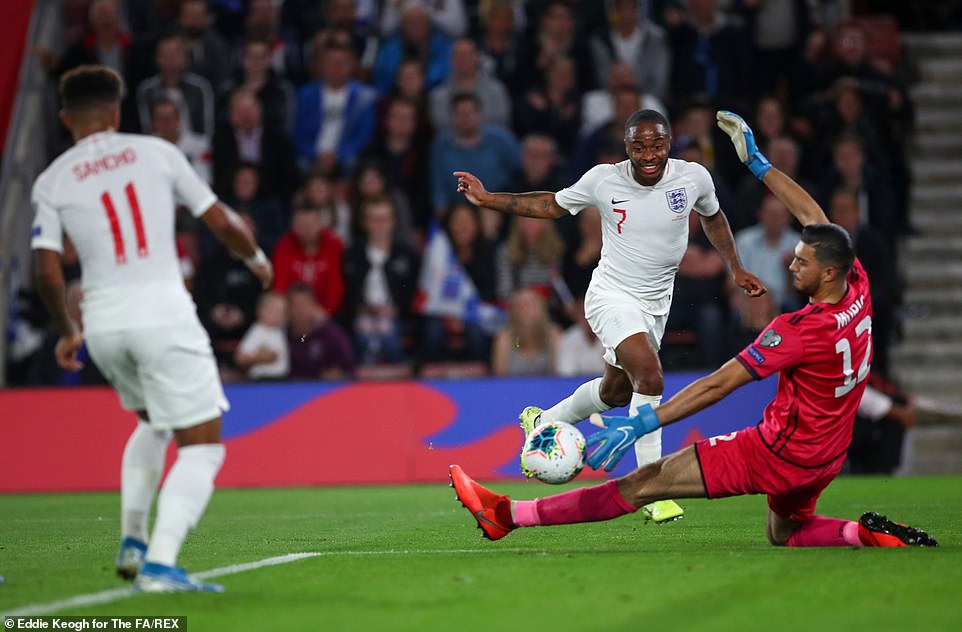 Sterling, who frequently threatened the Kosovo defence, did excellently before crossing for Sancho to score 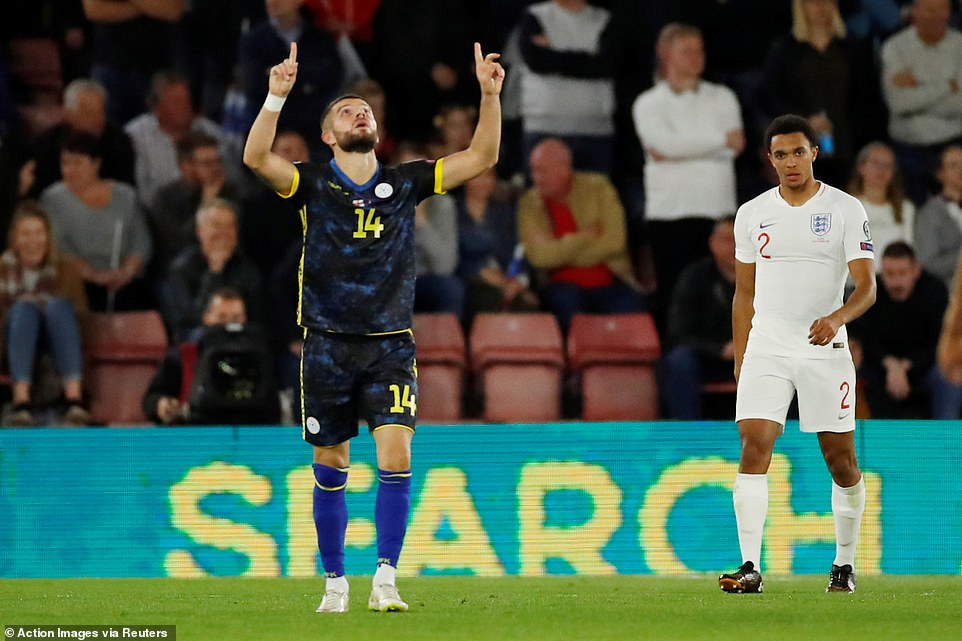 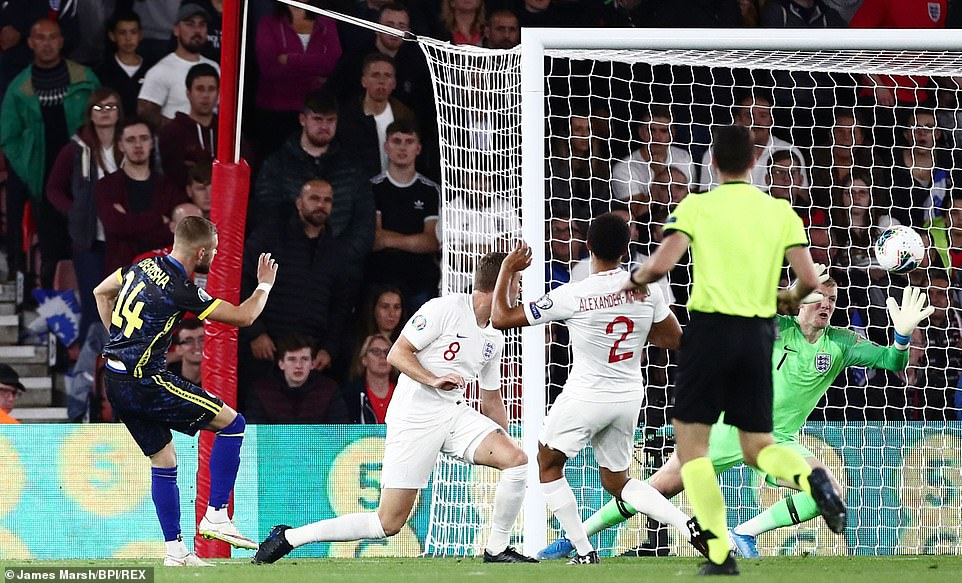 In the history of European football no nation had ever scored four goals or more in their first three qualifying matches for either the World Cup or European Championship. England set that standard on Saturday, then bettered it on Tuesday night. Either the level in Group A is depressingly low, or Gareth Southgate has crafted that rarest of things, a genuinely freewheeling England team.

Kosovo are supposed to be good. Kosovo were 14 games unbeaten going into this fixture and, as a fledgling nation, imbued with mythical qualities born of national fervour and pride. It didn’t count for much here, sadly. They took the lead with the first minute – but so did San Marino against England, famously, in 1993. The repercussions, however, were rather similar.

Not that Kosovo are San Marino in either spirit or ability. They are a brave team, who want to play on the front foot. They have been nobody’s whipping boys to here and may yet live to meet England against in the finals next summer. But just as San Marino were swept aside having enjoyed their moment of glory, so Kosovo were undone by England’s lightning fast front trio. They couldn’t handle them. Couldn’t handle their speed, couldn’t resist their intent.

Kosovo were 5-1 down at half-time and it was not a scoreline that flattered England. They cut Kosovo open defensively and got no more than they deserved. 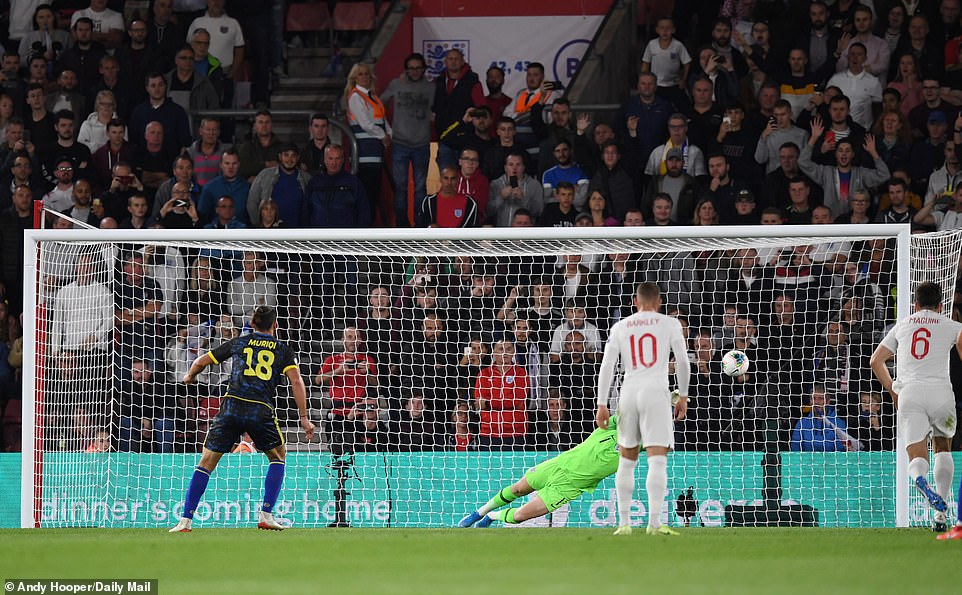 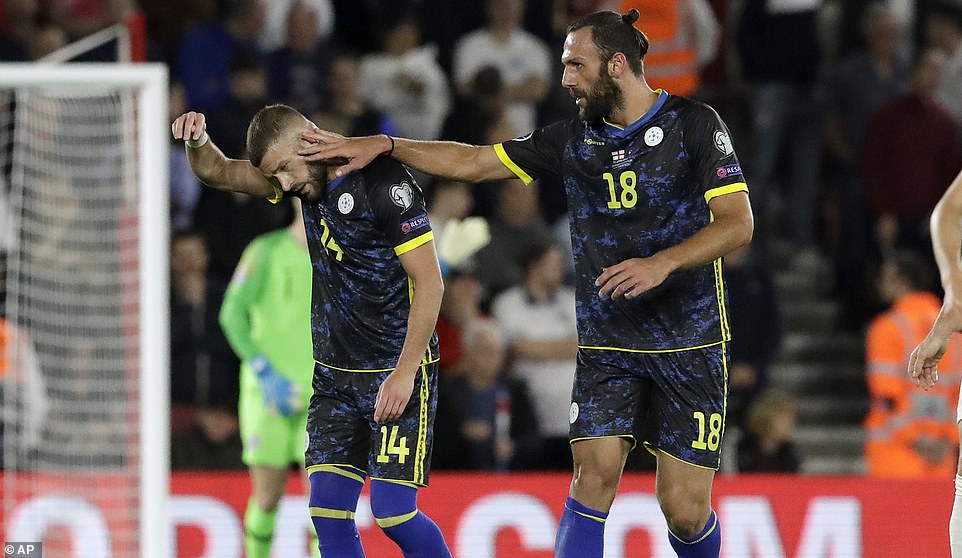 It was huge vindication for England’s coach, Gareth Southgate, not only because he kept faith with the man of the match Sterling amid mounting criticism of his international performances – but because he was bold enough to change the forward line after a 4-0 win, introducing Jadon Sancho for Marcus Rashford and being rewarded with goals, as well as devastating threat on the right.

After one of his goals he wrapped an arm around Sterling and pointed him out to the crowd – as if any introduction were needed. Sterling was simply sensational. It is incredible to think that this time last year, heads were being scratched as 1,102 days passed without a goal for England. Southgate kept picking him, though, made plain his faith and was ultimately rewarded with a goal against Spain in October. Since then, Sterling has scored eight in 12 matches for his country.

Yet Tuesday night was about more than just finishing. Sterling was also the architect of three of England’s five goals scored before his half-time, his pace on the left or through the middle terrifying the Kosovans who were backing off at a speed that suggested a runaway combine harvester, not a wide forward on the loose.

Pep Guardiola deserves credit, too, for bringing this out of his player, but whatever strides were being made at Manchester City would have been worthless, without Southgate’s endorsement. A weaker manager may have given up on Sterling. Southgate never wavered. 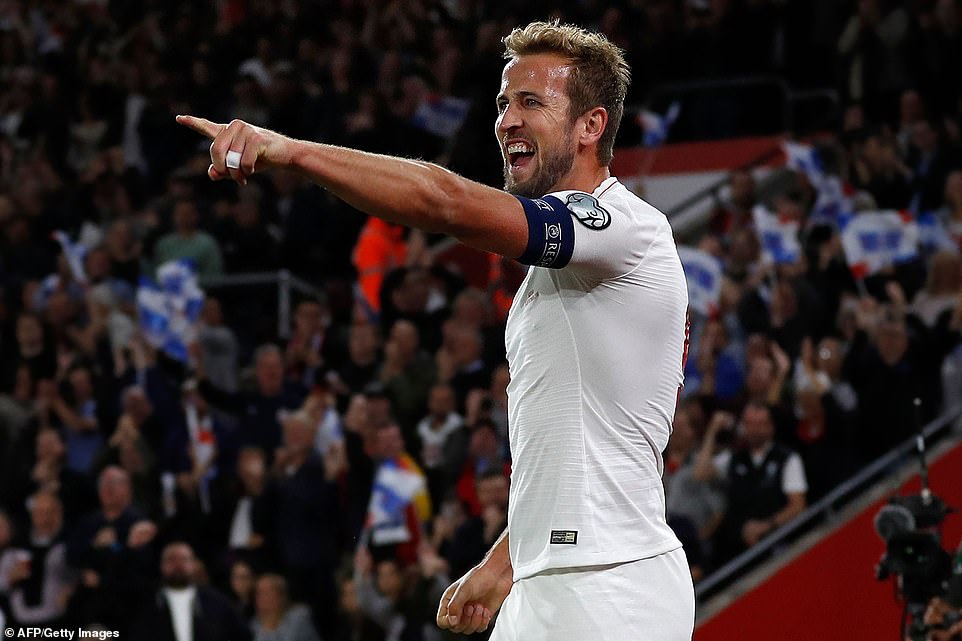 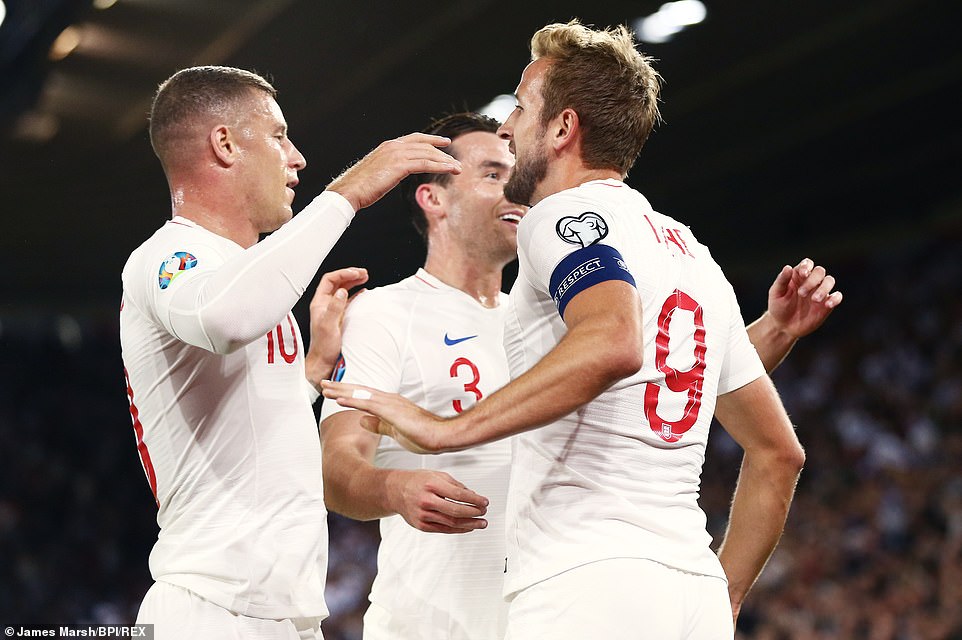 Just as he refuses to waver on playing the ball out from the back, even if some of his central defenders appear unequal to the task. Latest to fail the test, Michael Keane, of Everton – at fault for a goal after 35 seconds here. Joe Gomez of Liverpool would appear the better bet right now but, where he can, Southgate prefers to favour those in regular action for their clubs. So Keane partnered Harry Maguire, and Keane made the horrid, sloppy error that gave Kosovo a goal the first time they applied pressure.

England knocked it about at the back, Maguire to Jordan Henderson, Henderson back to Keane. It wasn’t the Liverpool man’s greatest decision but Keane could easily have gone back again, to his Everton team-mate Jordan Pickford. Instead he struck the ball square, ostensibly to Maguire, but falling instead to Kosovo’s Muriqi. He fed it swiftly into Berisha, whose finish showed no sign of nerves, given this was arguably the biggest game in Kosovo’s history.

Yet at the weekend Southgate said he would not swap England’s forward permutations for any trio in the world, and it soon became apparent why. His team took the game away from Kosovo before half-time – and they most certainly needed to, given the woeful defensive display that overtook the second-half. Had England not scored five times in 37 first-half minutes, this could have been embarrassing. 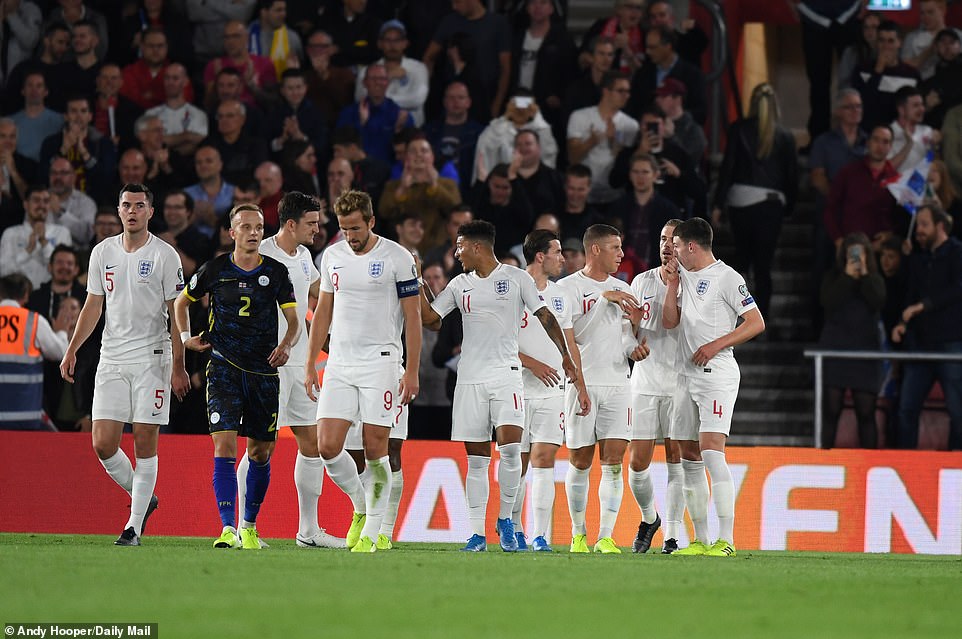 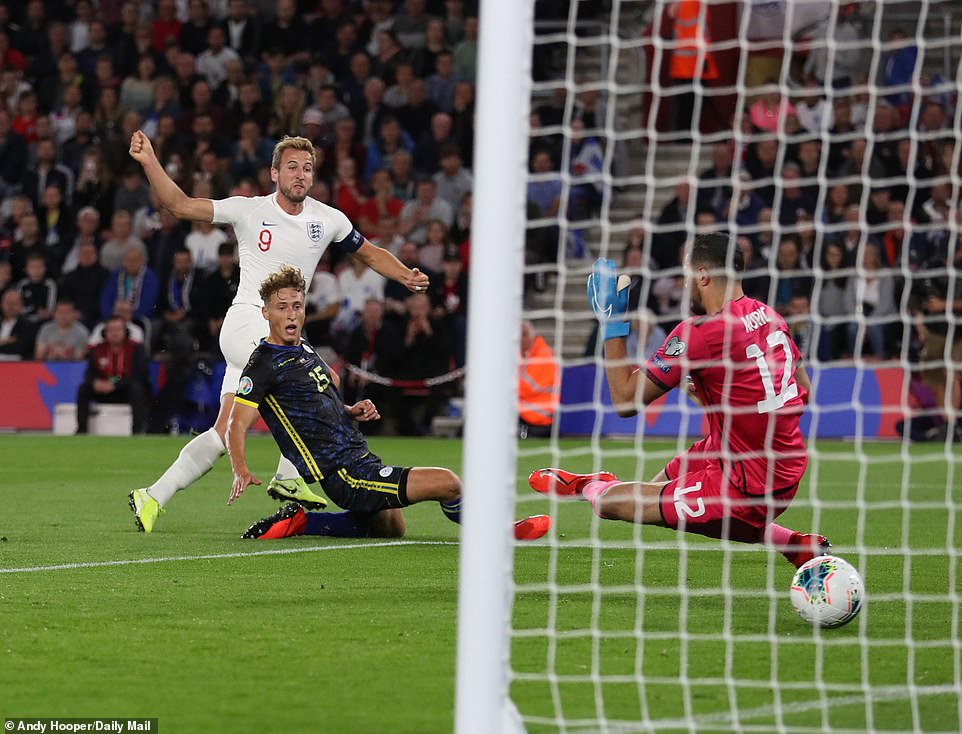 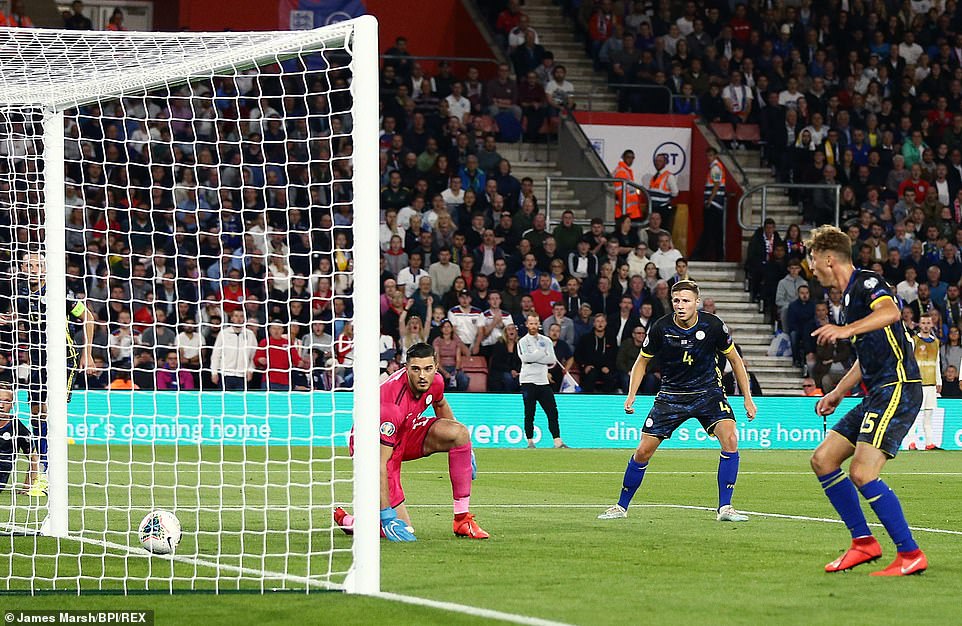 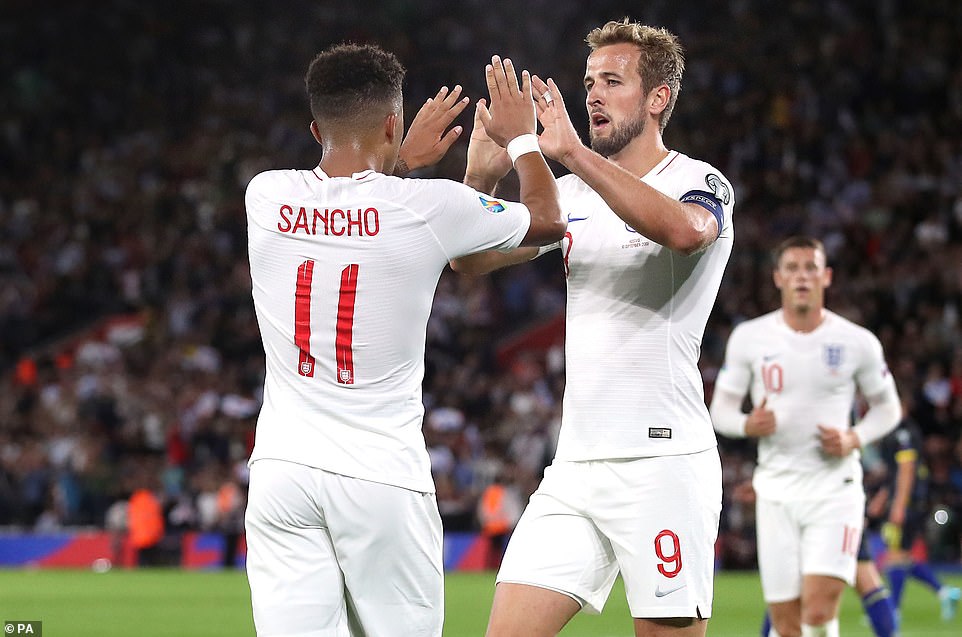 Keane made amends, of sorts, with the first. Sancho won a corner which Ross Barkley curled to the far post, met by Keane with an intelligent run. His header back cross goal found Sterling, not the biggest presence in the box, but popping up with a surprising number of headers these days. He steered the ball past goalkeeper Arijanet Muric, and England were level.

And then swiftly ahead. Sterling again, turning superbly on the centre circle, losing his man and speeding down the middle before unleashing Kane. The moment England’s captain controlled it, the crowd sensed goal, and he didn’t disappoint, A lovely low finish leaving Muric no chance. If he stays fit he will undoubtedly overtake Wayne Rooney’s scoring record.

MATCH FACTS AND GROUP A TABLE

If it is Rooney’s record to overtake, mind. Closing on him rapidly is own goals, who total 52 to Rooney’s 52 after the hapless intervention of Mergim Vojvoda. Kosovo were furious that Fidan Aliti was down following a challenge from Trent Alexander-Arnold, but there didn’t look to be much to it.

Sancho benefitted from extra space on his flank, however, and his got a cross in which Vojvoda clumsily turned into an empty net at the far post. There was no England man near him either.

By now Kosovo were truly struggling with England’s intensity and the next two goals were carbon copies, minutes apart. For the first, Sterling broke down the left and played Sancho in with a lovely diagonal ball, finished with a low shot after a moment’s hesitation.

Next time, another Sterling break ended with the ball cut back and finished by Sancho into an unguarded net. A tap in, but not the cleanest finish. By then, nobody minded. Never mind the quality, feel the width, the breadth, the sheer weight of this England forward line. 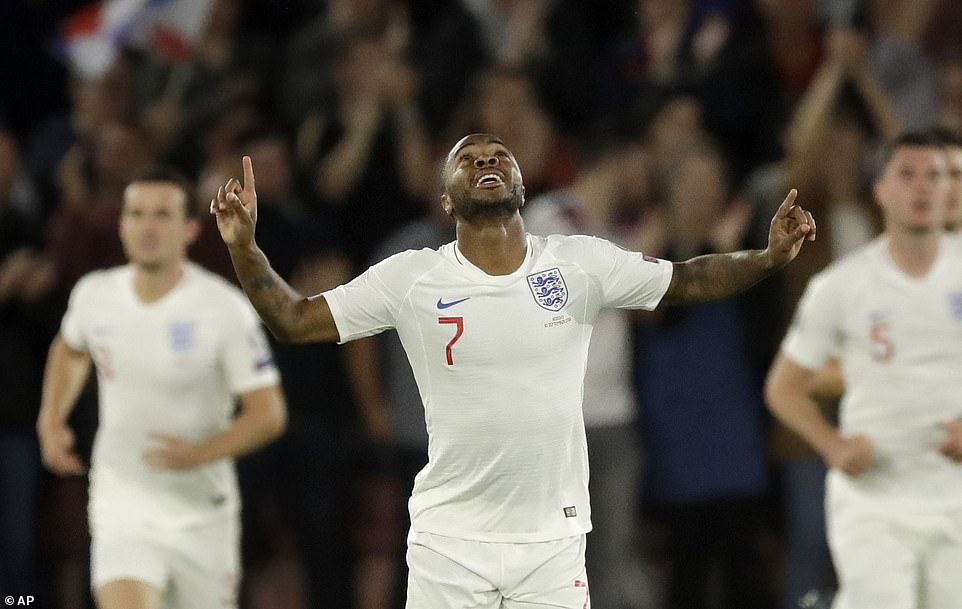 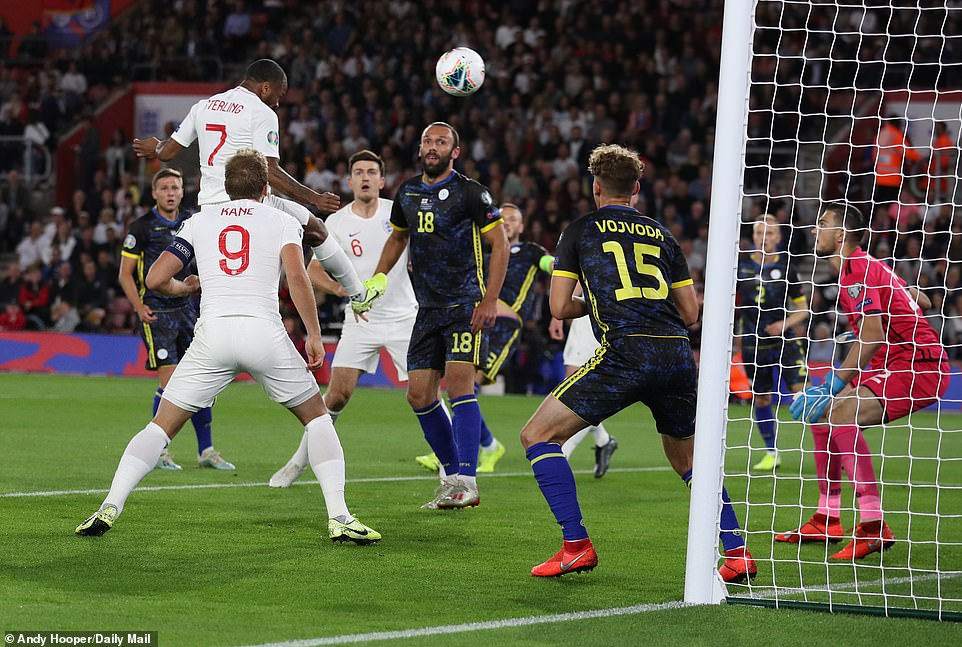 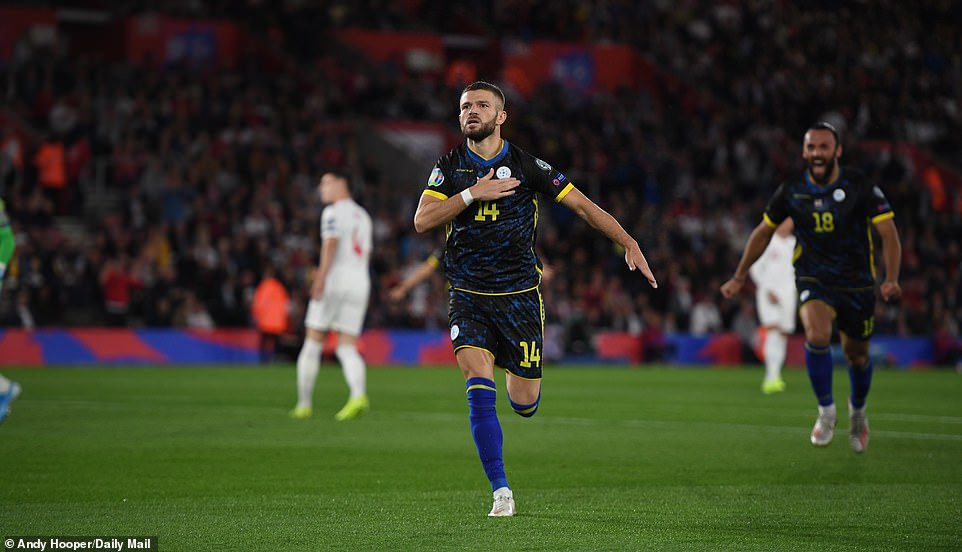 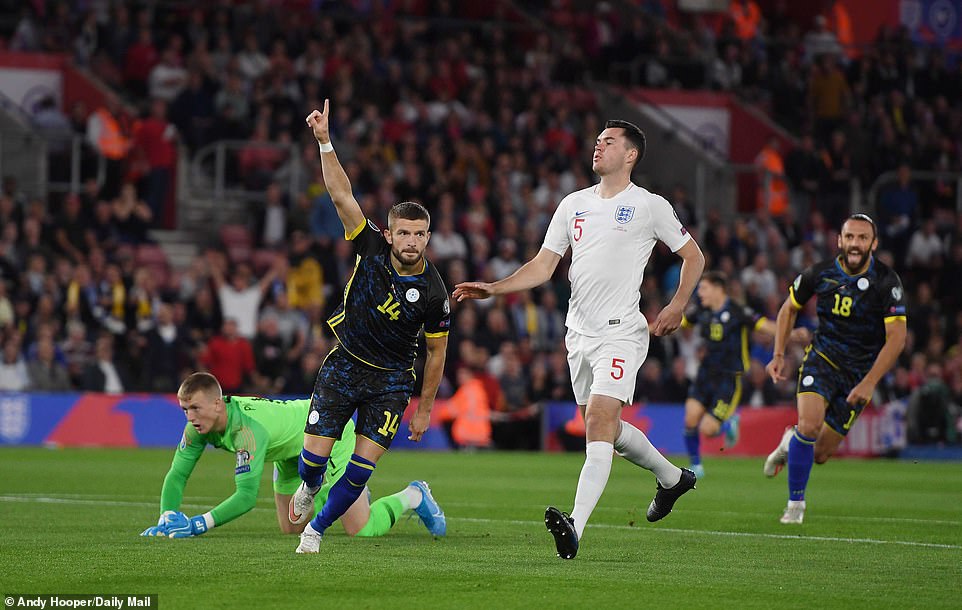 Keane is left dejected after his weak pass was cut out, with Berisha proceeding to find the net for Kosovo 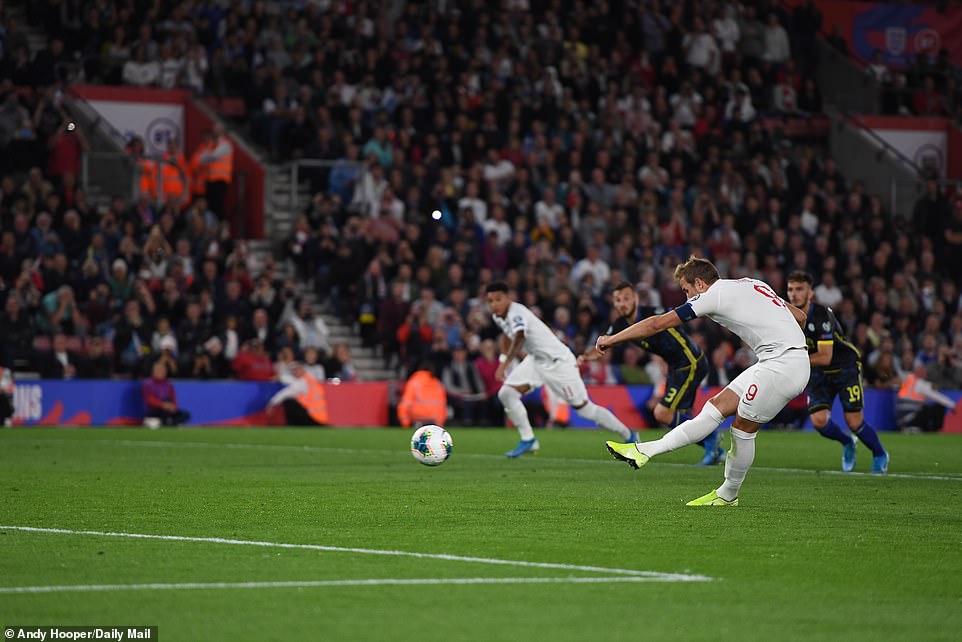 Kane missed a penalty in the second half, with his effort being saved by Kosovo goalkeeper Arijanet Muric 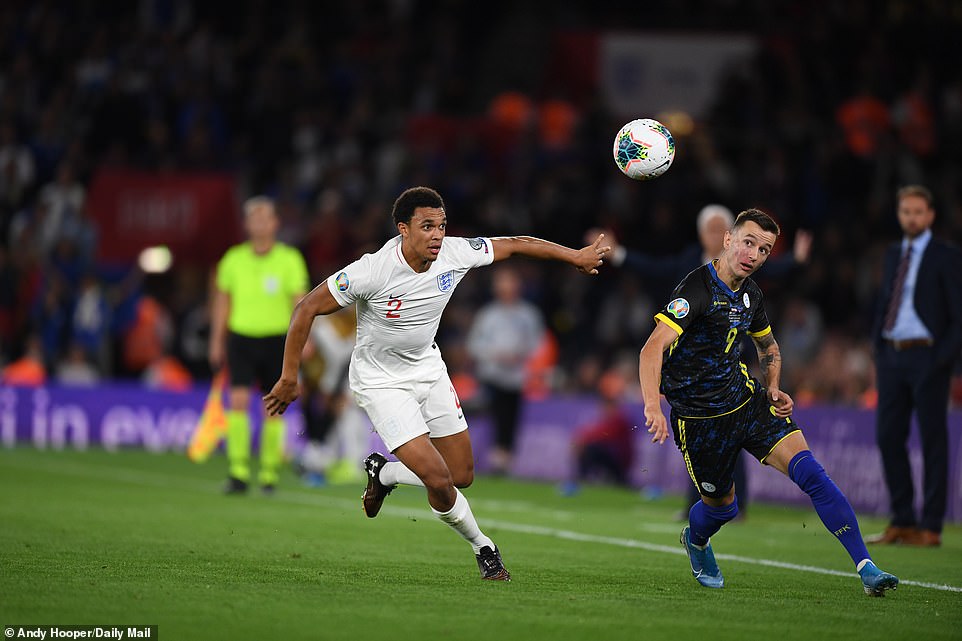