Dutch come from behind to beat former World Cup winners in Hamburg as race for Euro 2020 qualification hots up. 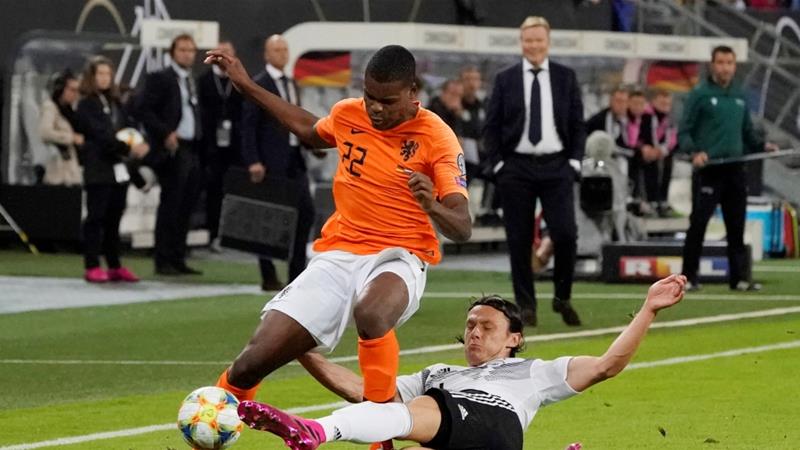 Substitute Donyell Malen scored on his debut and Georginio Wijnaldum netted in stoppage time to give the Netherlands a 4-2 victory over Germany and open up Group C in Euro 2020 qualifying.

The Dutch came from behind at half-time to lead 2-1 in Hamburg in Friday’s match but were pegged by a controversial penalty converted by Toni Kroos before 20-year-old PSV Eindhoven forward Malen struck 11 minutes from time and Wijnaldum made sure of the points.

Frenkie de Jong and a Jonathan Tah own-goal had put the Dutch in front after they had trailed at half-time from an early Serge Gnabry goal.

It was the first loss of points for Germany after three wins in the group, while the Dutch have avenged a 3-2 defeat to the Germans in Amsterdam in March and now have six points from three games.

Germany, who had been unbeaten in six matches, now travel to Belfast on Monday to play Northern Ireland, who have a perfect record after four matches, while the Dutch are at Estonia.

Elsewhere, Belarus earned a stoppage-time 2-1 win at Estonia to claim their first points.

Belgium stayed top of Group I with their fifth win from five games as they thrashed San Marino 4-0, with second-placed Russia winning 2-1 in Scotland.

Croatia moved top of Group E with a comfortable 4-0 win over Slovakia, while Wales beat Azerbaijan 2-1 thanks to Gareth Bale’s late header.