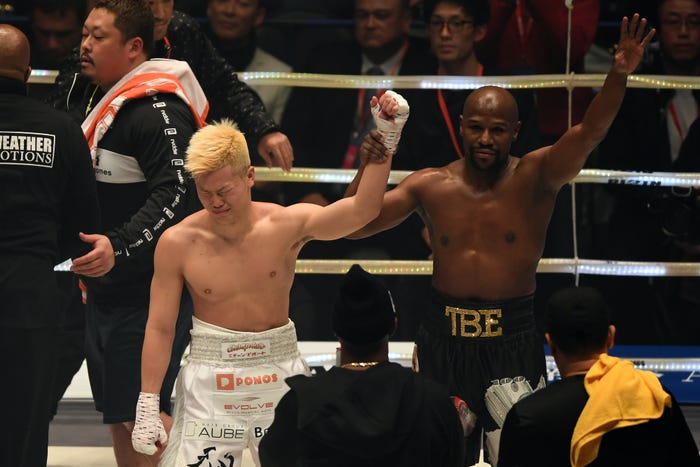 Floyd Mayweather has announced a return to the ring for a boxing exhibition in Tokyo on February 28.

It will be the first time he's taken part in a Japanese showcase since he beat an up-and-coming fighter called Tenshin Nasukawa in 2018, flooring the kickboxer three times in a one-round blowout, using Queensberry boxing rules.

"Japan is one of the most wonderful countries in the world. Tokyo is also a wonderful city. I want to entertain Japanese people," Mayweather said on a conference call Monday, according to talkSPORT.

The British sports website reported that details of the 2021 exhibition are scarce, including opponent. However, the MMA event is called MEGA 2021 and it will take place inside the Tokyo Dome, a venue renowned for its combat sports and sports entertainment having hosted Mike Tyson fights, kickboxing shows, and New Japan Pro-Wrestling cards.

Though it is an MMA event, Mayweather will unlikely be participating in a match which uses unified mixed martial arts rules.

His December 31, 2018 outing against Nasukawa was organized by Rizin Fighting Federation — a Tokyo-based MMA firm run by Nobuyuki Sakakibara — but was still a boxing exhibition.

"I would like to thank all the Japanese fans and Tokyo fans. Thank you for remembering me. I have no idea what kind of opponent I am [facing] now. I'm looking forward to going to Tokyo anyway.

"It's a place where great games have been organized, so I just want to go to Japan to entertain Japanese fans."

Mayweather reportedly banked $9 million for his participation in the Nasukawa exhibition, and then said a couple of months after the show that he was going to take part in "four or five" more exhibitions throughout the rest of 2019 and expected to earn approximately $80 million.

Not one of those exhibitions transpired, however, Mayweather's advisor and CEO of Mayweather Promotions, Leonard Ellerbe, said in August that the retired fighter has received "a few sick offers" regarding a potential $100 million exhibition tour.