He has a well-deserved reputation as Australian rugby’s goal-kicking ‘ice man’ but Bernard Foley has admitted he is not immune to the guilts after some costly misses for the Waratahs last week.

Foley was sitting on a competition-high 87 per cent success rate after 13 rounds but dropped down to 83 per cent after a performance in which he botched a chance to put the Waratahs in the lead against the Crusaders with three minutes to go.

It was an uncharacteristic dip for Australia’s first-choice No.10, and Foley conceded he felt it. 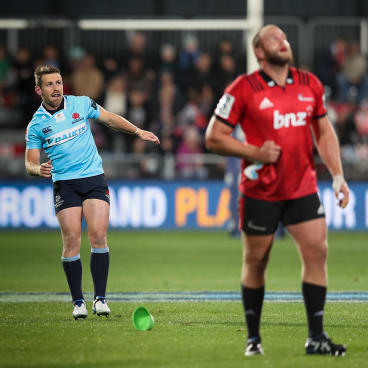 Body language: Bernard Foley follows the flight of a penalty kick against the Crusaders.

“When you miss those kicks it definitely hurts and you definitely feel the added weight,” he said.

“But in saying that, with respect to the team, I know they're going to do the job and they have every faith in me.”

Foley has a long history of nervelessness in the big moments, including a penalty goal after the whistle to wrest the Super Rugby champions trophy from the Crusaders in 2014 and a similar kick to secure a one-point win against Scotland in a World Cup quarter-final the year after.

As far as consistency goes, however, this season was shaping up among his best ever, and it’s that less sexy form of success he craves.

“I have kicked well in games or in stretches but that's something I want to do throughout a whole season, not kick well for five games then have a shocker and drop the percentage,” Foley said. “So you’re reliable and you can do the job when the team calls for it.”

Foley has flown under the radar in the playmaking role at NSW this season, happy to let Kurtley Beale’s creativity shine from inside centre and Israel Folau show off his aerial skills from fullback.

His teammates’ exploits have given critics cause to question Foley’s form in Super Rugby and draw implications for the Wallabies. With Beale and Reece Hodge the Wallabies’ next choice five-eighths, some have wondered if there is enough competition around to spur Foley on.

The 28-year-old said it felt very different from the inside.

“I like to think I'm intrinsically motivated and the fire burns within. I don't need that external pressure or motivation to lift me,” he said. “The thing about the form, that's an individual [measure] but it's not what I judge myself on, it's mainly on how the team is going and what I can do to help this team and get the outcomes that we want.”

On that measure, there is motivation aplenty. Super Rugby enters round 14 with Australian teams still long odds to end the much-talked about losing streak to their New Zealand rivals. In the Wallabies jersey it is much the same.

“The fact is, in the Waratahs and Wallabies, we're not where we want to be. We always want to be the best we can be, we want to be No.1 in the world and No.1 in this competition. That's my motivating factor, to get the team into a position where we should be and where we deserve to be,” Foley said.

“Over the last couple of years we've under-performed and we haven't won as many trophies as we would have liked. For me personally, it's about getting the team back to where we should be and where we want to be.”

A drought-breaking win against the Highlanders at Allianz Stadium on Saturday will be a good start. Highlanders coach Aaron Mauger has indicated his respect for the home side by bringing over All Blacks Ben and Aaron Smith at a time when there is pressure to rest them for the upcoming June Test window.

“They’ve got probably the world’s best fullback [Ben Smith] and [All Black Waisake] Naholo is pretty dangerous on the wing as well. Without possession they like to kick the ball away and then they back their defence. For us it’s going to be an 80-minute performance, start like we did last week and carry it on.”