More than footy at stake for young Phillips on Anzac Day

When Collingwood youngster Tom Phillips runs out onto the MCG for the annual Anzac Day blockbuster against Essendon on Wednesday, not only will he aim to continue his impressive start to the year, but his great-grandfather, who fought for Australia, will also be front of mind.

Robert “Bob” Nichol was stationed in Papua New Guinea for most of World War II as a member of the Australian air force and also was a code-breaker. He died at the grand age of 101 early in 2013. 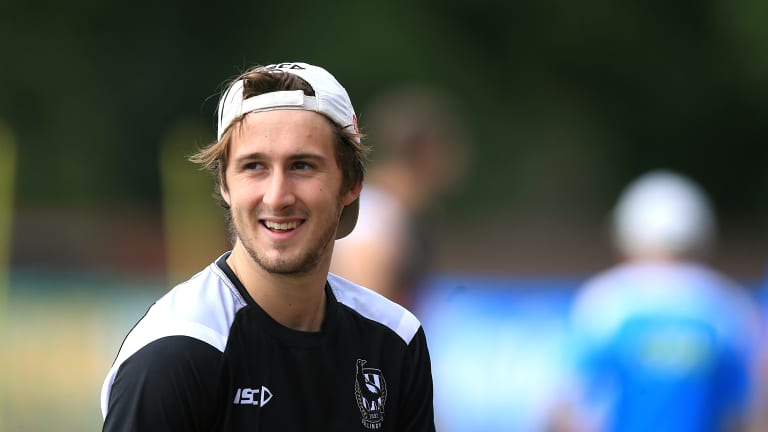 Phillips considers himself fortunate to have been able to form a strong relationship with his great-grandfather, who played a crucial role for the army in WWII.

The 21-year-old has been playing his own role well for Collingwood this year, averaging a career-high 25 disposals with only stars Steele Sidebottom, Adam Treloar and Scott Pendlebury having amassed more touches for the Magpies in 2018.

But the hard-running midfielder said playing on Anzac Day was “extra personal” for him.

“I couldn’t imagine the experiences and everything he witnessed over there,” Phillips said.

“He wasn’t necessarily right on the front line with the soldiers, but he did a lot of stuff behind the scenes and I can imagine everyone doing their job, their trade for the betterment of the collective, and whether it’s a footy team like the Collingwood footy club going out tomorrow or the Australia and New Zealand Army Corps, it’s similar messages and values.

“Everyone plays their role at war and the same goes in a football game – everyone’s got their job and you do that to the best of your ability.

“It’s about mateship, it’s about sacrifice, you’ve got to hit a contest hard, when it’s your turn to go, you go.

“Nothing symbolises that more than a game on Anzac Day and the messages that the Anzacs give us about our own life and how privileged we are to play this game.”

Some of Phillips’ fondest childhood memories are of spending time with his great-grandfather on Anzac Day.

“He lived a pretty long life and I was lucky enough to get to know him during my first 16-17 years,” Phillips said.

“He didn’t talk too much, but on Anzac Day he always used to march and I remember doing the march when I was a kid with him just outside the Shrine with his badges and he always had his medals that he achieved and he was acknowledged for.

Phillips played in his first Anzac Day game last year, just his 10th AFL game, and the Oakleigh Chargers product believes that experience will serve him well for his second one on Wednesday.

“I think I’ve had a bit more experience and just the feel for the game and the speed of the game now,” he said.

“You can never really prepare for an Anzac Day clash. It’s definitely different and unique to any other home-and-away game, so there’s a different feel and a different spirit in the air and you’ve got to embrace that and encapsulate that and really just go with the feeling and play with a bit of heart and soul.”

Since returning to the line-up for his fourth game late in 2016, Phillips has been a constant in the Collingwood side and has registered his two biggest disposal tallies in the past three weeks.

Despite only having 28 games to his credit, the former No. 58 draft pick feels he already is comfortable at the top level and puts the rapid cementing of his place in the Magpies’ best 22 down to good preparation and playing whatever role he is asked to fulfil, whether that be in the midfield, on a wing or as a high forward.

“I’m naturally working into it and maturing as a player at AFL level,” said Phillips, who was part of back-to-back TAC Cup premiership teams in 2014 and 2015.

“I’m pretty fresh with my mindset going into games and not being too clouded by too many different things that I’ve got to think about.

“It’s a deep belief and resilience that I’ve built up … I’m just very competitive and I’ve always been like that.

“Being pick 58, I guess the reputation and pressure hasn’t been as high early on in my career and it’s just allowed me to play and work on my own brand from scratch. There’s no preconceived ideas about me, it’s almost like starting fresh.

“I’ve come in pretty quietly and now I can really showcase to the world what I’m about as a player.”