Four Points: Serial offender needs a stint on the sidelines

Now his cheap, weak hit on Scott Selwood should prompt a fourth.

The Match Review Officer’s punishment schedule should be ignored in this case and Michael Christian and Steve Hocking agree to send Thomas directly to the tribunal. He should be treated as a recidivist and accordingly rubbed out at length.

First let’s take it back a step to the incident. The woman on the Port bench on Saturday night was instructive of the ugliness of the moment. She is seen in the background of the footage as Thomas cannons past the ball and into Selwood. Reflexively she says “Oh Shit!” and puts her hands to her face. It was that kind of hit.

Duty of care? It was carefree more than careless.

Under one reading of the AFL rules he will be graded as careless, high contact and high impact and so get two weeks. That is insufficient. 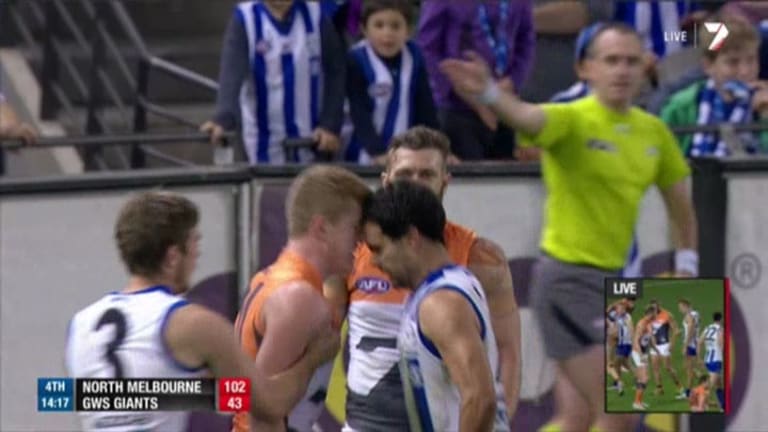 The AFL Guidelines state that, when assessing impact, it is relevant to consider the potential for injury as well as the actual injury. This is particularly so with head-high contact and even more so when the head is down.

It could be argued the hit was medium – I wouldn’t – and so high is the eventual outcome when taking into account the guidelines mentioned above. High is not unreasonable but by the guidelines it could as easily be considered severe.

He will argue he made contact to the body first and not the head. That is irrelevant. Contact was made to the head. Selwood did not go off with concussion from a bump to the body.

It was careless because it’s doubtful he intended to bump him in the head.

One of the changes to the tribunal system this year was to dismantle some of the prescriptive approach of the schedule for each offence and so left the process, as former panel member Jimmy Bartel referred to it, as “a box ticking exercise”.

New footy boss Steve Hocking said he encouraged more decisions to be taken outside of that framework and be sent straight to the tribunal. This is one of those and the reason is his record.

Last year Thomas hit Melbourne rookie Corey Maynard in the head in a VFL match with a fly by bump in a pack. He had the chance to tackle Maynard but thought he would take his head off instead.

Maynard was sent to hospital. Thomas was sent to the grand stand for five weeks by the tribunal. 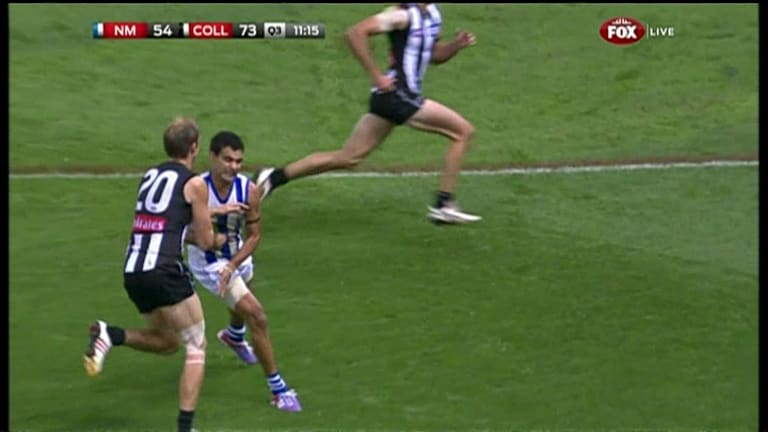 In 2013 he bumped Collingwood's Ben Reid and struck him in the head. He was cleared by the Match Review Panel because they said there had been a bump to the body and an accidental clash of heads. The rules were changed after that to say a clash of heads is reasonably foreseeable in a bump and so should not be considered an accident.

The year before that it was Daniel Nicholson of Melbourne he cleaned up. He got three weeks. Nicholson got a broken jaw. He again argued it was an accident, some blokes are just dead unlucky.

Earlier that year he skidded into Swan Gary Rohan’s legs. He initially got three weeks from the MRP but was cleared by the tribunal. Rohan got a broken leg and missed the year. That incident prompted the AFL to change the rules to ban sliding below the knees.

Then there were his other ugly non-bump moments – the head butt of Jacob Townsend. That was another two weeks out but he at least didn’t argue an accident then. There was the kick to the chest of Dylan Grimes in the elimination final that drew a fine. Oh and the clothesline tackle around the neck of Lachie Hunter of the Bulldogs.

Thomas’ history suggests his motivation is not protecting the ball, or even getting the ball it is that when an opportunity presents you should try and knock the other player out. The game has moved on from that but Lindsay hasn’t, so it’s time the game sent Lindsay a stronger message.

The AFL laws presently don’t really cater for recidivism. At some point – now would be good – the tribunal has to look at Thomas and his history of bumps and say ‘you don’t get it’ and punish him accordingly.

It's a Knock Out

North Melbourne is third on the ladder. Third from the top of the ladder that is.

That is heady space that even they doubted they'd occupy this year. Whether they can sustain it is questionable but the way they played Hawthorn gives some confidence. 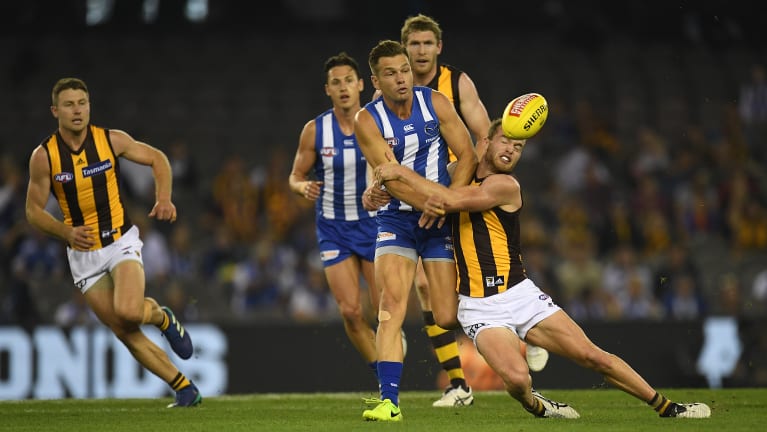 Wrapped up: Tom Mitchell tackles North Melbourne’s Shaun Higgins during the round five clash between the Roos and the Hawks.

Shaun Higgins was the symbolic figure of the day. He began with his head in the clouds after the birth of his baby overnight and ended it with his head cloudy after being knocked out by a bump from Ryan Burton that will see the Hawk suspended.

He was symbolic because he reflected why it is North is sitting third on the ladder. They are young and old.

Higgins was a crock when he left the Dogs. He’d had one really good year but was forced to live off that as he battled injury after injury. He looked physically gone and so a speculative pick when North Melbourne got him. Well that speculative bid has been a canny one for the Roos.

Higgins has been good since he got to North but never better than he has been this year. Indeed he has never played better, including his breakout year in the midfield with the Dogs.

He was not the Roos best on Sunday but he was good … until he was knocked out.

Higgins is 30. He was one of three thirty-somethings out there on Sunday for North (Jarrad Waite and Scott Thompson were the other two).

The Roos are rebuilding yet simultaneously winning with an older list. Their older players, like Higgins, are playing well and putting up the wall to shield the younger players.

Todd Goldstein who was good again in the ruck. He is 29. Robbie Tarrant, excellent across half back, is an 28.

Critically those mature players are across each line – forward, mid and back.

Daniel Talia said after the Crows win over Sydney that his team had not really missed Jake Lever.

You could read it however you want as to whether he was clipping Lever or not. Clearly what he was trying to do was praise Tom Doedee's form in stepping into the role Lever vacated. 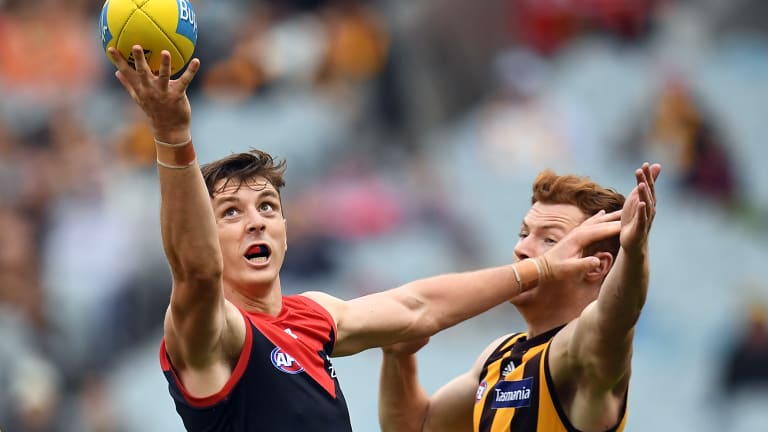 Talia was one of the reasons Lever was as good as he was at Adelaide and why he is still searching to find his place at the Demons. He is a good player, so he will find it but at the moment he and the Demons are working out how he fits.

Lever has been allowed less licence this year to be able to roam and intercept mark. That is partly the way the game has changed partly the way Melbourne has set up defensively.

Richmond with their small forward line present Lever with a difficulty in finding a match up. Does it then give him greater licence to play his natural game and play to his asset and try to zone off and intercept mark?

The Tigers are the best and worst opponent for Melbourne coming off the pathetic effort of last week. As the bench mark of high energy football they at least give Melbourne the ability to measure the effort that was palpably missing last week.

Free in the eye of the beholder

OK, Phil Davis should have been penalised for a free kick for around the neck to Jake Carlisle … unless you were standing where the umpire was. 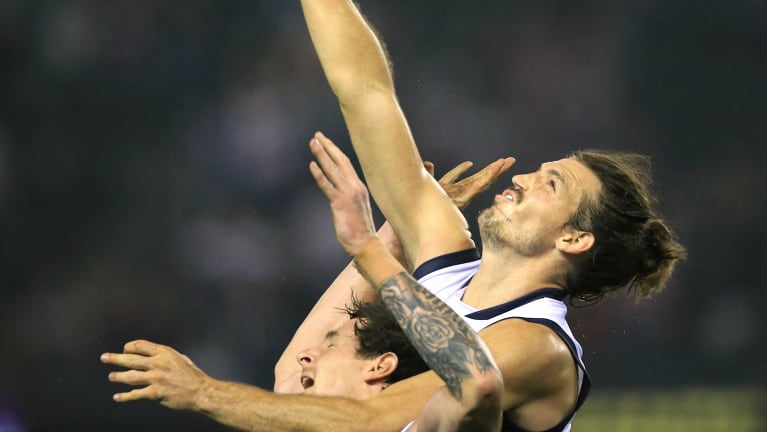 The thing of the live tv footage of the last seconds of the St Kilda versus GWS game was that the camera was pointed over the umpire's shoulder. From there you could not pay a free kick to Carlisle because Davis's right arm is up and hits the ball not Carlisle's arms so there was no chopping.

And the left arm the umpire can't see so he can't guess. The question is where the other two field umpires were who were unable to see Davis's left arm snake around Carlisle's neck. Clearly no other umpire could have been in position and not called that a free.

Plainly GWS will be thankful no umpire was there as they got away with two points from a game they should have lost. They should also, more pertinently, be asking why it was that Dylan Shiel, their best midfielder of the day with Josh Kelly out, could spend the last nine minutes and 55 seconds of the game on the bench unable to attract a teammate to come off so he could get back on.