Freedman would prefer spotlight to be off nice stayer Roman Son

Rosehill trainer Richard Freedman is well aware of the attention Roman Son has already drawn and can only hope he lives up to the boom in the Provincial Stayers Championships at Hawkesbury on Saturday.

The four-year-old joined the Freedman yard this preparation and arrived with a reputation from reeling off a hat-trick of wins starting with a Kembla maiden and getting through to a city win over 2200 metres last campaign. 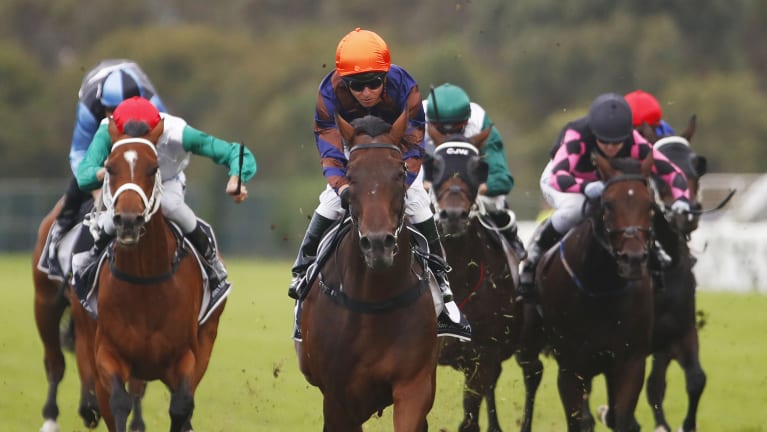 Boom times: Roman Son streaks to victory at Rosehill earlier in the month.

It has only grown under Freedman's guidance as he has fired home in sensational sections at his two runs for a second behind Absolute over the unsuitable trip of 1400m before careering away with a four-length win over 1800m at Rosehill.

“Everyone seems to be talking about him and to be fair to him, he hasn’t even raced on Saturday,” Freedman said. “You have to remind yourself that he is still a [benchmark] 78 horse, which has has had his share of problems in his career.

"But he has shown himself to be pretty handy on raceday, we are just hoping to let him show that.

“You would rather not have the spotlight on him like he has going into this race, but there isn't much we can do about that.”

Roman Son has been backed from $2.45 to $1.95 with Sportsbet since betting opened on Saturday’s 2100m staying test. Freedman said he looked better suited as he stepped up in trip.

The acceleration he showed for Kerrin McEvoy at Rosehill at the end of 1800m hinted that better races were in store.

“He is a very relaxed horse in everything he does, which makes him interesting to train,” Freedman said. “He doesn’t do that much on the track. You could even say he is a bit lazy.

“You definitely don’t get a look at that turn of foot until raceday.

“He does enough for us to know he has a bit of talent but we have to wait to raceday to see it. Kerrin has certainly got the best out of him in the two runs for me and having him on again on Saturday makes a big difference."

Freedman wants to see Roman Son take the next step at Hawkesbury and acknowledges for a stayer there are plenty of options.

"We will see how he goes on Saturday before working out where he can go," he said. "He is the type of horse that is going to be around for a while and it will be a case of placing him in the right races."