Giants coach Leon Cameron will resist the urge to rush players back from injury, despite his side losing two more troops in Saturday's 25-point loss to the table-topping West Coast Eagles.

Matt de Boer injured a hamstring in the first half and didn't return, while co-captain Phil Davis was concussed in a sickening marking contest late in the third quarter before being helped from the field. 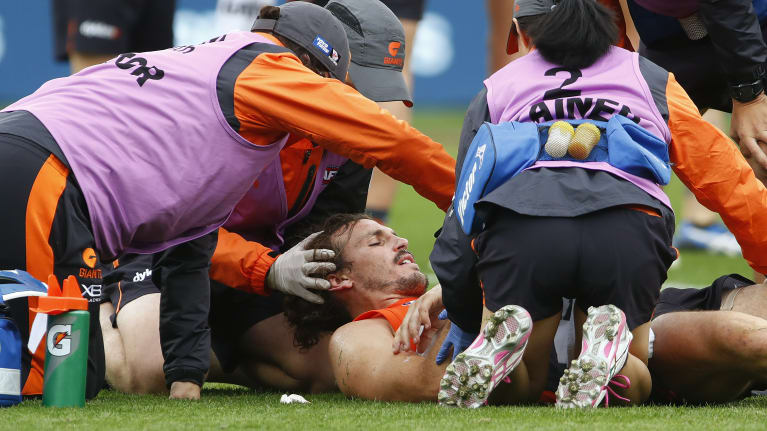 Hard-running midfielder Lachie Whitfield suffered a shin injury in the third quarter also, but was able to return and see out the game.

Davis will be monitored throughout next week with an eye to playing against North Melbourne at Blundstone Arena, but Cameron expected de Boer would miss at least a game which would add him to a growing casualty ward at the club.

"When you're down on form and you're struggling a little bit there's always that decision, you [can] reach out for some of your players who are coming back from injury and whether you go down that track and we've got to be careful of that," Cameron said.

"It's a hard one, Kelly's had a really good week-and-a-half, two weeks, but we've got to be really mindful. When we brought Toby back in, maybe it was a little bit too early.

"It's only round eight and we want to make sure these players are playing some really good footy through that middle part of the year.

"It's a journey, it's a huge marathon, we know that, and right now we've had a couple of little blips in the marathon we're running at the moment in the last few weeks but I'm confident we'll find our form when we need to." 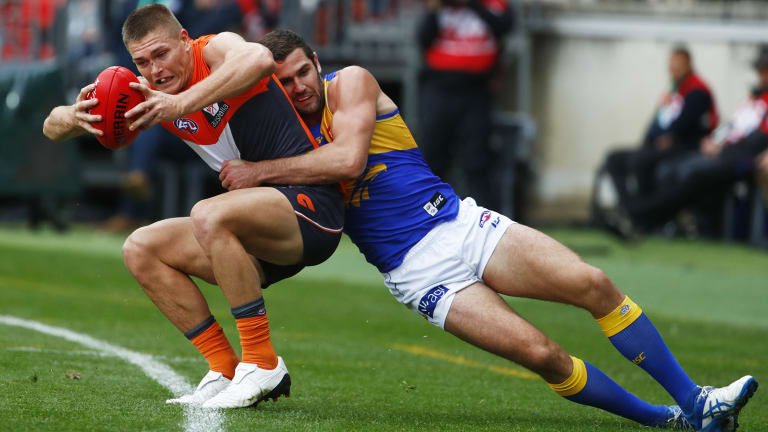 "We've got to be at AFL standard making better decisions coming out of our back half and obviously into our front end."

The Giants' third loss of the season means they have managed just one win in the past four rounds – an unconvincing triumph over the struggling Brisbane Lions two weeks ago at Spotless Stadium.

During that stretch they've also drawn with lowly St Kilda and copped a 61-point hiding by Geelong.

Turnovers out of defensive 50 killed GWS once again, and the Eagles' versatile forward line

feasted on the butchered ball.

Jack Darling booted four first-half goals to set up the win, while Jake Waterman chimed in with three.

"He [Darling] has been playing at a pretty high standard, definitely since I've been here. This season it's probably gone up another level," West Coast coach Adam Simpson said.

"Just with the maturity, he's got a wife and kids now and he's a bit more settled in life. He's in that leadership space where he knows what to do for the team, really predictable and he's got hands of steel at the moment – it's hard to break those hands.

"[He had a] really important play, I think we were three or four goals in a row against and the ball came out of the middle and he took a significant mark and he went back and kicked a goal and that was a clutch goal for us."