Home » Sport » Goddard is entitled to give feedback in a blunt manner: Worsfold

Goddard is entitled to give feedback in a blunt manner: Worsfold

Essendon coach John Worsfold has launched a strong defence of Brendon Goddard's right to give direct feedback to teammates on the field saying he encourages his players to do that during games.

Goddard's animated directions to midfielder David Zaharakis in the third quarter are understood have been reminders to the midfielder to lower his eyes and look for teammates when blazing away with the ball.

Worsfold said it was Goddard's responsibility as a senior player to give such instructions and there was not time to get the whiteboard out in the middle of the MCG on Anzac Day.

"In the course of a game it has to be blunt and to the point," Worsfold said.

"I would strongly encourage players to communicate with each other if they are not on the same page."

Goddard was then seen in discussions with key forward Joe Daniher at three quarter time.

Fairfax Media understands Daniher was being told to ensure the forwards picked up their men when Essendon didn't have the ball while the forwards were concerned about what was happening further up the ground.

"Players have agreed that they will give each other strong feedback," Worsfold said. 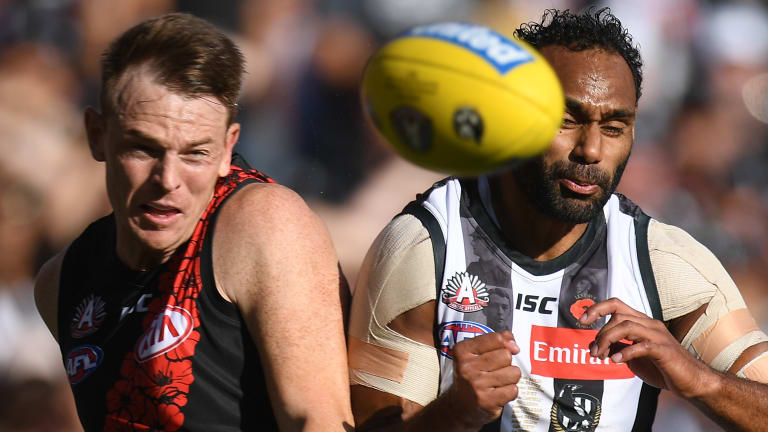 Goddard has acknowledged in the past his actions can look worse than they are in reality with his finger pointing making his directions more noticeable than those given by other players.

Worsfold said if the Bombers wanted to be a great team they had to interact in that way and that Zaharakis would welcome the feedback given.

Goddard's teammate Michael Hurley said the instructions showed how much the veteran Bomber cares about his teammates and there was too much made of the issue.

"The beauty of 'BJ' is that he will follow that up during the week," Hurley told Fairfax Media.

"Sometimes it may look slightly aggressive but he'll follow it up. He'll get the vision and he will teach the young fellas."

He said it was prepared to challenge teammates when they moved away from the plans in place and he was happy to be challenged as well.

Worsfold described Goddard as the team's most senior player and said he had a responsibility to give feedback to teammates.

"I would be very disappointed if he wasn't sharing his knowledge and leadership," Worsfold said.

Essendon's struggled to move the ball out of defence at various times during the game and tried to switch the ball from one side of the ground to the other in defence without winning territory.

Essendon won uncontested marks in the back half but their forwards were denied opportunities in space because of the slow ball movement.

Worsfold said the Bombers were being hurt on the scoreboard when they went forward so they wanted to challenge the Magpies' defence by switching the ball across the backline rather than bombing the ball forward.

He said the players didn't execute the plan to perfection but he was pleased with their intent.

"It wasn't exactly what we were asking them to do but at least they were trying to do something different," Worsfold said.

The Bombers face Melbourne in four days time and will need to replace Josh Begley who injured his knee in the first quarter and Josh Greene who was sidelined with a hamstring injury.

He was hopeful Orazio Fantasia would return for the game against Melbourne after missing Anzac Day but he remained an outsider given the short break.

"In terms of becoming a great team, every week will count towards that," Worsfold said.

"We have got a good crew there, if we all commit to what we're trying to achieve together I believe it is there."

Meanwhile victorious coach Nathan Buckley said the Magpies viewed Sunday's clash against Richmond as an opportunity for them to assess their progress.

"I think we're now looking to test ourselves," Buckley said.

"We've got a bit more belief. We've definitely got some more sustained and consistent form behind us [and are] probably a little more settled than we've been in previous years."

The Magpies went into the Anzac Day clash unchanged and escaped relatively unscathed from the win with a shoulder injury to Will Hoskin-Elliott the only minor concern with just a four-day break before the game against Richmond.

For the first time for several seasons, the Magpies are in good shape on the injury front with Taylor Adams and Darcy Moore returning from hamstring injuries soon while Daniel Wells has now played two VFL games in succession.

Buckley said the team was disappointed with their first quarter but he was pleased they were able to reset themselves to play the game in their preferred style after the first break.

"The ball has definitely been a positive of the past couple of weeks," Buckley said.

"The ball use is third in line of importance for us. We want to be a really strong defensive unit. We want to get the contest right and the ball use will look after itself."

The Magpies ended up winning every quarter against Essendon with the win elevating them to fifth on the ladder, the highest they have been since round 14, 2015.