Home » Sport » Going From His Childhood Bedroom to the N.B.A. Draft

Going From His Childhood Bedroom to the N.B.A. Draft

Marc Stein is on vacation this week.

Tyrese Haliburton didn’t imagine he would ever find himself living with his parents again inside his Wisconsin childhood home.

Certainly, he did not throughout a sophomore season at Iowa State in which his stock skyrocketed in N.B.A. mock drafts everywhere.

But once he realized the pandemic, and its effect on the sports calendar, would be prolonged, Haliburton settled in for the long haul.

He claimed his old room by banishing his older brother to the basement and started labeling his food in the refrigerator to ensure it would remain there when he returned.

“There’s so much that’s unknown right now, but I’m just taking it a day at a time, attacking whatever is on my schedule for that day,” Haliburton said. “I feel like when I look at the bigger picture, I can get overwhelmed or maybe a little stressed out with all the questions that everybody’s asking, because I don’t have a lot of answers to those questions.”

While there is much to still figure out about when and how the N.B.A. will return next season, one protracted date is finally on the horizon: the N.B.A. draft will be held in less than a month and top prospects like Haliburton will finally have their professional destinations.

The N.B.A. long ago evolved into a year-round league. The pandemic knocked its circadian rhythm off balance. Rookies, in a normal year, would have been drafted months ago, played in the summer league and be preparing themselves for opening night at around this time.

Instead, some of the most talented basketball players in the world have been left without a team for the better part of a year.

“You’re missing out on summer league, the in-person physical draft, shaking the commissioner’s hand, once-in-a-lifetime opportunities,” said Haliburton, while also noting that he is privileged for basketball to be among his primary concerns right now. “The ultimate goal is to play in the N.B.A. We don’t know when, but we know eventually that we’re going to get there.”

Haliburton, though, is not lacking for confidence in terms of where he believes he should be picked.

“I feel like I should be the No. 1 pick, but I’m not the guy who makes those decisions,” Haliburton said. “We can revisit this in a couple of years and see if there was any regrets by anybody who picked anybody ahead of me.”

For now, Haliburton and other draft-eligible players say they are taking things one day (which often contains two or three workouts) at a time. 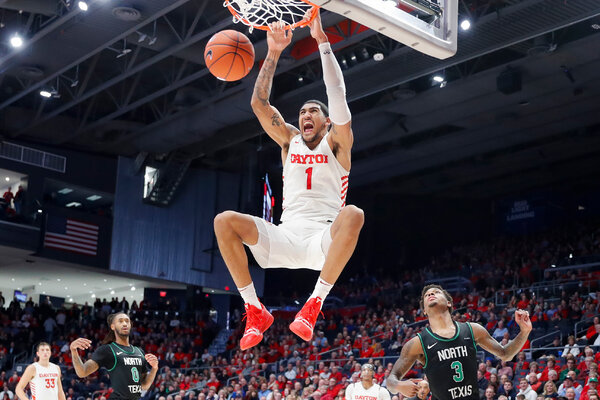 Toppin did not have to look far for competition during quarantine. He was at his New Jersey home with his brother, Jacob, who recently transferred from Rhode Island to Kentucky. “He pushes me just like I push him,” Obi Toppin said. “We’re both super competitive. Every day was a grind.”

Toppin has spent the last few months playing pickup basketball and picking the minds of N.B.A. players like the Knicks’ Kevin Knox and the Mavericks’ Jalen Brunson, and training under the former N.B.A. point guard Rick Brunson, Jalen’s father. “I ask those guys questions every single day on how I can prepare myself for the next level, how I can get better for the next level,” Toppin said.

Josh Green is using this time to appreciate how far he has traveled in a short amount of time. A couple years ago, Green, an Australian, simply wanted to land a college scholarship.

In the spring, Green and his Arizona teammates were readying to play Southern California in the Pac 12 tournament quarterfinals when their coach, Sean Miller, reconvened the team. The rest of the tournament had been canceled, Miller told them.

They hoped that the season would eventually continue.

“But that three weeks led to five weeks to six weeks to the season being canceled,” Green said. “It was a continuous thing. It was awful for our team. I felt bad for all of us. Because I felt like we were going to have a really good end-of-the-season run.”

Green declared for the N.B.A. draft in April, joining two other Arizona freshmen, Zeke Nnaji and Nico Mannion. He debated returning home to Australia to see extended family members against continuing to train in Phoenix and Las Vegas. Ultimately, he decided to remain in the United States.

“There’s a huge quarantine rule in Australia now where you have to quarantine for two weeks and I figured those two weeks, that’s a lot of time to get better as a player,” Green said. “I’d love to see my family and friends, but I have to make sure that I’m ready to go for the draft.”

The N.B.A. announced last month that the draft combine would take place virtually and in team’s home markets. ESPN, citing a league-distributed memo, reported last week that teams would be allowed up to 10 visits with draft-eligible players for in-person evaluations.

Of course, one can only train for so many hours a day. Devin Vassell, the former Florida State star, is binge-watching “Stranger Things” and “Fargo.” After his final workout of the day, Haliburton typically catches up with friends or plays cards with his family, the choice games being Uno and Phase 10.

“I just started reading,” he added with a laugh. “I know my English teachers will love to hear that, but I started reading a little bit, give me something to do. Then I got a gaming computer during quarantine, so I’ve been learning how to do a lot of different things on the computer.”

Vassell, like Haliburton, moved back home. “All the places that I work out at are probably about 10 minutes away from the house,” he said. “It’s kept me grounded and humble while I’ve been here.”

Nothing has been normal about this pre-draft process. Some things, though, will be the same.

Sixty players will soon have their names called in the two rounds on draft night, their professional careers starting in earnest, a dream worked into fruition, even if it’s solidified through a video conference and not a handshake from N.B.A. Commissioner Adam Silver.

“It’s a dream walking across that stage and shaking his hand, putting that hat on, of course, but I think when you get that phone call and your name is called, you still get that experience of a dream coming true,” Vassell said.

Marc may be on vacation, but you can hit him up anytime on Twitter (@TheSteinLine) or Facebook (@MarcSteinNBA) or Instagram (@thesteinline). Send any other feedback to [email protected].