If Chris Goulding has his way, he and Andrew Bogut will be the fiercest of NBL opponents and the best of Australian Boomers teammates over the next two years.

The two Olympians kicked off the next chapter in the rivalry between Goulding’s Melbourne United and Bogut’s Sydney Kings this week as Goulding anointed the Kings the title favourites due to Bogut’s arrival. 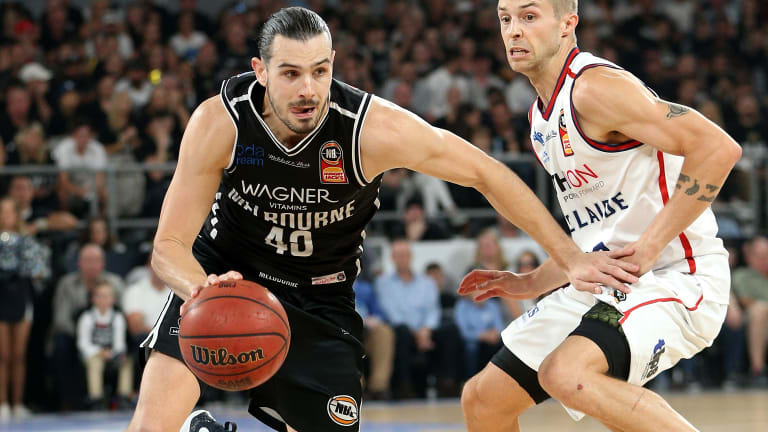 Chris Goulding has signed a two-year deal with United.

Goulding spoke after re-signing with Melbourne for the next two years. His deal is the same length as Bogut’s contract as both players aim to play for the Boomers at next year’s World Cup in China and the 2020 Tokyo Olympics.

Bogut wasted no time in biting back, tweeting that Goulding had “forgotten” he won the NBL grand final MVP award and Melbourne won the title.

“They are the defending champs, lots of pressure!” Bogut tweeted.

Goulding enjoys the banter but knows the NBL needs the Kings to become a force.

“What it will do for the rest of the league is now everyone is going to want to beat Sydney,” Goulding said.

“It is good for the league. He had extended talks with us at Melbourne United but things couldn’t get worked out, that’s the way it goes, so he moves up to Sydney and a club that needs to move in the right direction after the last few years they have had.

“They are putting together a formidable roster, one that will have a target on their backs much the same as we did last year.

“I think the crowds will come out in droves. I think we will have record crowds in Sydney and most other places will sell out when they roll into town.

“The NBL needs a popular and, I won’t say successful, a semi-successful Sydney Kings.”

Having played alongside Bogut at the Rio Olympics, Goulding has no doubt the big man has plenty to offer.

“He has definitely got things left in the tank, that is not even a question,” Goulding said.

With Goulding returning, Melbourne United can turn their attention to finding a new power forward, with big man Tai Wesley expected to sign with New Zealand.

Melbourne’s player budget has been cut back a little as Larry Kestelman looks to sell the club but Goulding said Melbourne could still repeat as champions.

United may not chase any imports until later in the year with many elite talents wanting to test out their NBA hopes before looking overseas.

On the Boomers front, Goulding knows he faces a battle to remain in the best 12 for the next two tournaments and he will put his hand up for the next two World Cup qualifiers in June and July.

“I’ve been lucky enough to play at those two competitions and it would be amazing if I could do that again,” Goulding said.

“Whether that is a reality or not, all I can do is play the best basketball I can here in front of the coach, make myself available for the FIBA windows and we will see what happens.

“The reality is we have seven or eight guys in the NBA now and we could soon have more. If I can put my best foot forward and make one or both those teams, that would be amazing, if not I’m happy to play my part whenever they need me.”