Former Wallaby Stephen Hoiles has called on Australian Super Rugby players to learn how to "cheat better" after a Waratahs loss marred by some controversial refereeing decisions that Rod Kafer and George Gregan also criticised.

After leading 29-0 in the first half, the Waratahs came up short against the Crusaders by two points in what was the biggest comeback in Super Rugby history. 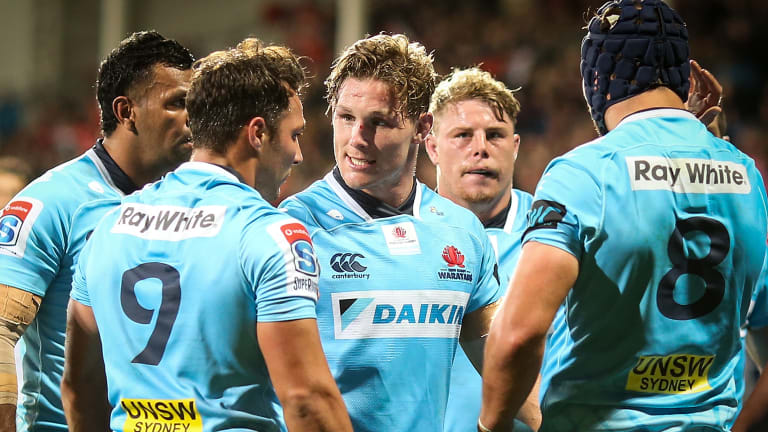 Dejected: Michael Hooper of the Waratahs (centre) speaks to his teammates.

Captain Michael Hooper was a shattered man after full-time but said there were positives to take out of the loss in Christchurch, a place the Waratahs have not won at since 2004.

“We know what we’re capable of and [it is] disappointing to let that slip particularly when you get out to such a good lead,” Hooper said. “I was really pleased to come here and put them under pressure straight away. Some players made some really good individual efforts there.

“We knew it would go right down to the end and probably our discipline hurt us there with two yellow cards. It’s hard to beat these guys with 14 men.”

Hoiles, speaking on Fox Sports after the match, aired his frustrations at the performance of Kiwi referee Ben O’Keeffe, who appeared to let Crusaders players get away with a number of off-the-ball hits.

“The reality is, we’ve got to start cheating better,” Hoiles said. “That’s what we as Aussies need to do. We need to start running players off the ball. We have to be a little bit craftier off the ball, that’s what Australian rugby needs to do. We can’t let the referee make all these decisions.”

Gregan added: “They push the envelope right to the last minute. There’s probably a couple you could say: ‘hang on, maybe he could blow the whistle' but you won’t because you’ve been pushing it the whole time and that’s what good teams do and the referee lets that go.

“That’s the art of becoming a very good team.”

While Hoiles, Kafer and Gregan all made it clear the referee was not to blame for the comeback win, the trio agreed Crusaders prop Joe Moody should have been shown a red card in the 35th minute for a “cheap shot” on Kurtley Beale.

Moody elbowed Beale in the throat while the Waratahs No.12 was in the defensive line. Seconds later, Moody got the ball and crossed for his side’s first try.

“That’s a red card offence,” Kafer said. “That’s an elbow to the throat of a player. The try shouldn’t have been scored, the guy should not be on the field.”

Gregan believed a red card would have created a “totally different perspective of the game”, while Hoiles said: “[it is] absolutely certain he’ll have to get suspended from that act. It’s a cheap shot.”

The Waratahs were not awarded a potentially match-winning penalty after full-time when it appeared back-rower Michael Wells was tipped above the horizontal.

Hooper asked O’Keeffe whether he could check with the TMO to see if an infringement had occurred but nothing came to fruition.

“I’m not saying Bernard Foley is going to kick that because he missed two sitters but they should have had a penalty on the bell with another chance to win it,” Hoiles said. “I don’t like the fact when a captain shows respect, doesn’t harass him all game and asks him for something to be looked at … it’s a penalty every day of the week.”