Mike Tyson is back for a pay-per-view fight. Well, not exactly a fight. (“It’s an exhibition bout between two former champions,” said a seemingly exasperated Andy Foster, the California State Athletic Commission executive officer. “I don’t know another way to put it.”)

Somehow, Tyson being back in the ring is a natural cap to 2020. A documentary series in the spring allowed millions to watch Michael Jordan’s Chicago Bulls run it back. The Fresh Prince recently returned to Bel-Air alongside the original Aunt Viv. Prince Akeem will soon be coming back to America from Zamunda, courtesy of Eddie Murphy.

We reside in an era saturated in nostalgia, rampant with reruns in service of our need for safe, constant pandemic entertainment.

Relentless news cycles make it difficult to imagine a hopeful tomorrow. We hug the familiarity of what we know.

None of those previous revivals, of course, required much physicality. Jordan only had to lace up his shoes to sit down for interviews.

Tyson is 54. Ronald Reagan worked from the Oval Office when Tyson destroyed Trevor Berbick in 1986 to become the youngest heavyweight champion at the age of 20. George W. Bush was president during Tyson’s final official boxing match, a biting loss to journeyman Kevin McBride that made clear that at 39, Tyson was no longer “Iron Mike” to serious pugilists. 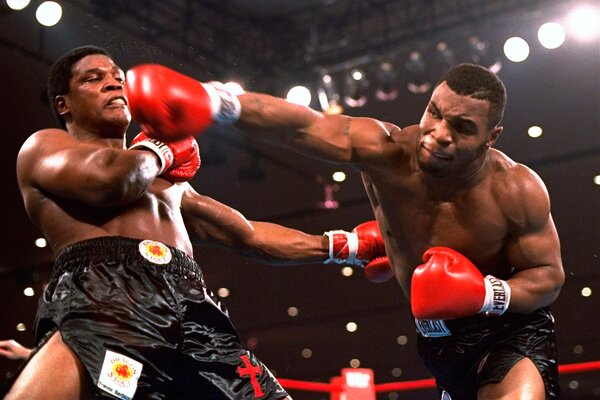 On Saturday, he will fight Roy Jones Jr., 51, another once-skilled boxer long past being past his prime (“This exhibition, I can understand the appeal for it,” said Steve Farhood, a Showtime boxing analyst, adding: “You can’t expect much. You can train your body as much as you want, you’re still 50-something years old.”).

But nostalgia sells and Tyson always proved a draw.

And if you’re thinking Tyson needs the money, no, that is apparently not the case. His cannabis company appears lucrative. The fight (“If you know anything about his fighting career, he’s been done for a while,” said Louis Moore, a boxing historian and professor at Grand Valley State University. “A long time.”) will earn funds for several charities under the umbrella of the Mike Tyson Cares Foundation.

“Why can’t I do something bigger than me? ” Tyson said during a recent telephone call, while acknowledging that he is known to be selfish. “Like I said, ‘Why do I always have to think about me? Why can’t I think about somebody else for one in my life?’”

The roots of the exhibition, scheduled at Staples Center in Los Angeles, began with the same catalyst that has caused many a man to fall.

“Everything is a reason in my life,” Tyson said. “I do everything for a reason.”

He said he was more than 100 pounds overweight, felt labored walking a block and didn’t like how he looked in the mirror. He started eating vegan and training again inside the ring when he felt something familiar.

“The first time I ever boxed, boom, I get hit to the side, my ribs crack,” Tyson said. “Boom, I get hit in the jaw a couple times. And you know what? It never once came to my mind to say, ‘What the hell am I doing here?’ I sort of said, ‘I’m in the right place.’”

He posted a couple sparring videos that quickly went viral.

“I had no idea that I was going to get like 2.5 billion impressions,” Tyson said. “I didn’t think it was that important. To me, what is that about? I’m not much of the internet kind of guy. I don’t understand that world. You know what I’m talking about?”

Opportunities and offers poured in. “Oh listen,” Tyson said. “At first, it was the M.M.A. fight with Bob Sapp. Then it was Tyson Fury. Then it was Shannon Briggs, and now it’s Roy Jones. So, I don’t know how we got from Mr. Sapp to Roy Jones Jr., but that was the route we went.”

The World Boxing Council announced the creation of yet another belt for Saturday night’s bout, the Frontline Battle Belt. The main event is scheduled for eight rounds of two minutes each. The night will be presented not by a legacy boxing network but by Triller, a social video app that raised money from entertainers with the elevator pitch of establishing a U.S.-based TikTok alternative.

The Tyson-Jones matchup is the calculated culmination of an evening of spectacle from beginning to end. Rappers including DaBaby, Lil Wayne and French Montana are scheduled to perform live. Ne-Yo will sing the national anthem. There is merchandise on sale.

Tyson and Jones may not even be the most improbable bout. The undercard features a match between the YouTube personality Jake Paul and the former Knicks player and dunk specialist Nate Robinson.

The event is the first of an envisioned series produced under a new venture called Mike Tyson’s Legends Only League, owned by Tyson and the media executive Sophie Watts’s Eros Innovations, which hopes to feature notable retired athletes from a litany of sports — Formula One, tennis, basketball — competing again.

“It was Mike’s idea to kick off the league with his own fight,” said Watts, adding that she is planning for four calendar events in 2021.

During the interview, Tyson imagined other boxers participating in bouts for charity, like Fury, Deontay Wilder, Floyd Mayweather and Oscar De La Hoya. “That would be powerful,” he said. “My ego would mean nothing. That would do off my ego, if we all got together.”

This is another act in Tyson’s winding life, with the seniority of someone who perhaps did not envision making it this far. “I know it seems different, me being who I was before and who I’m becoming and trying to become in life, but that’s just what it is,” Tyson said. “I didn’t choose this route. I wasn’t navigating. I’m very grateful to be alive. I learned a lot of gratitude.”

Tyson’s first debut introduced him as “the hunter, the pressure fighter who will try to push his opponent’s nose bone into his brain, as he once famously said,” Farhood said.

A rape conviction and prison stint marked a steep downfall. Three decades later, an environment of tolerant silence has changed with regard to abuse in the world of sports and entertainment.

“During the time when this happened, it was fairly rampant but just underreported” among many famous men in sports, said Miki Turner, a former sports columnist who is an assistant professor at the University of Southern California teaching journalism. She added: “I’m glad that this movement has really emerged and really sort of shaken all the nuts from the trees.”

Tyson said that until his downfall he was too self-centered. “I didn’t want to be humble. I got humbled. Life beat me into submission,” he said. “I lost my babies, I lost people I loved and it just — I had to get it together and found my head. And it could be me. I could be gone tomorrow or 10 minutes from now. You know what I mean? I’m not no religious freak, man, don’t get me wrong, OK?”

Tyson’s career ended after he was knocked out by journeymen in consecutive matches and encountered financial issues. Then came a memorable cameo in 2009’s bro-comedy, “The Hangover,” a book, a documentary, a one-man live show, and his role as an often introspective, entertaining podcast co-host.

“I just know there’s something greater than me,” he said. “It’s up there somewhere, you know. Some kind of way.”

Of today’s boxers, Tyson believes the heavyweight division would have the potential for excitement if the premier boxers fought more frequently.

“Boxing will always have superstars and megastars,” Tyson said. “But don’t matter how big they are, they’re still not bigger than boxing, boxing will survive.”

In an ideal world, Tyson said he would be journeying with his son, Miguel, who visited Haiti with a missionary.

“He was in these earthquake ridden, war-ridden countries and he feeds people and builds them dams with the missionary,” he said. “A perfect world, that’s where I would be in a perfect world.”

This being 2020, it is not that perfect world. But Saturday should at least be an interesting night.

Mike Tyson is again scheduled to fight (“We expect it to be a spirited exhibition, a good exhibition of boxing skills, but it’s an exhibition,” Foster said).

His goal is as it was 30 years ago, to land as many punches as hard as he can.