Legendary coach Jimmy Johnson was told Sunday night he was elected to the Pro Football Hall of Fame.

Johnson coached the Dallas Cowboys to two Super Bowl titles and put the franchise back in the spotlight after taking over for Tom Landry in 1989. He was also credited with building the team that won a third Super Bowl in the 1990s and marking them as the team of the decade during that time.

Johnson and Cowboys owner Jerry Jones had a noted falling out as Jones sought to have more of a hand in personnel decisions. Johnson had the final say in making decisions when it came to Cowboys players despite Jones having the role of general manager. Jones angered Johnson when he told reporters that any coach could have led the team to a Super Bowl title.

Jones on Sunday put out a statement on Johnson being elected to the Pro Football Hall of Fame.

“We’re so happy that the Hall of Fame has recognized Jimmy Johnson for what he is. A great coach,” Jones said in the statement, according to the team’s website. “To Jimmy I say, ‘The stars were aligned and our dreams came true when we joined the Dallas Cowboys.’ And on behalf of the Cowboys, and our fans all over the world, I say congratulations Jimmy. We’re proud of you.” 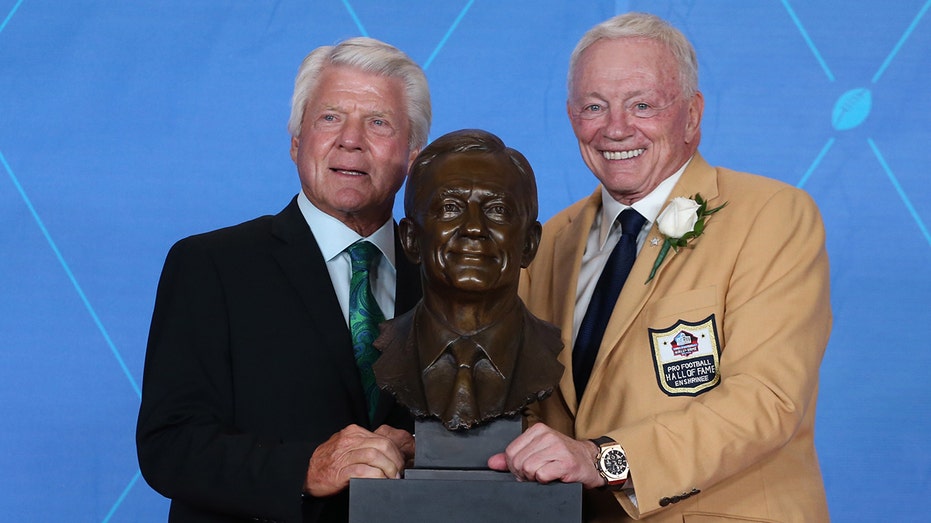 The Hall of Fame announcement might be the first step in softening the tense relationship between Jones and Johnson. The former Cowboys coach is not in Dallas’ Ring of Honor.

Members of Johnson’s Super Bowl-winning teams have been honored in the past, including Troy Aikman, Emmitt Smith, Michael Irvin, Charles Haley and Darren Woodson. But not Johnson.

Johnson and Jones reunited in 2017 during a United Way charity event and Johnson tweeted his congratulations to Jones when the Cowboys owner made the Hall of Fame.

Jones could mark the official end of the feud by including him in Dallas’ Ring of Honor next season.