The Newcastle Jets are into their first A-League grand final in a decade after Riley McGree's wonder goal – an amazing back-heeled volley over his head – put them on the way to a come-from-behind 2-1 victory over Melbourne City in front of 19, 131 fans at a rainswept McDonald Jones Stadium.

Former Melbourne City man Jason Hoffman grabbed the winner in the 75th minute to destroy the Melbourne club's dream that it could make its first ever championship play-off.

City had taken a first-half lead, but the Jets were relentless and in the end no one could argue that Newcastle didn't control the game and deserve to go through to a final showdown against either Sydney FC or Melbourne Victory.

The Jets, staging their first home final since 2008, began at a lightning pace, desperate to make up for lost time.

Ernie Merrick's side dominated the opening exchanges, their pace, quick ball movement and the threat they posed from set pieces causing constant alarm in the City rearguard.

There was plenty of needle too, as might be expected in a game of this magnitude, with the Jets Venezuelan marquee player Ronald Vargas exciting the ire of the City players after a flailing elbow caught Daniel Arzani early in the game.

Dimi Petratos almost gave his side a fifth minute lead with a free kick that skidded through the City defence but just swerved the wrong side of Dean Bouzanis's post. 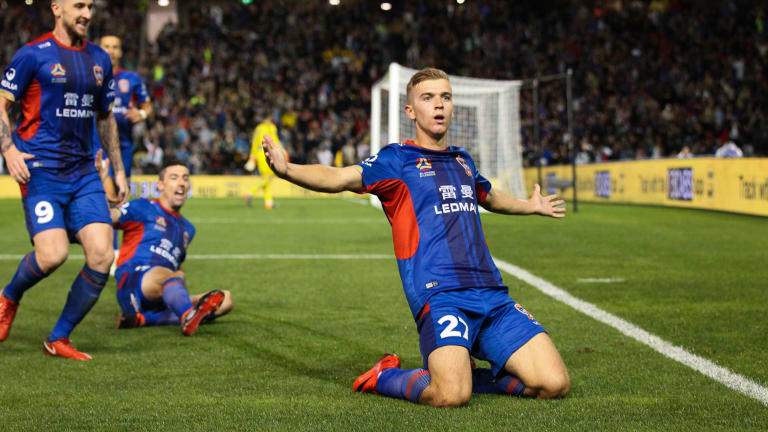 Hoffman missed a glorious chance in the eighth minute, putting a free header over the bar from another Petratos free kick.

City were almost caught out again two minutes later from a short corner when the Jets worked the ball to Petratos for another swinging cross which dipped and twisted just past his teammates.

But all of a sudden the Jets were behind, and chasing the game.

City managed to get the ball forward on the left and Scott Jamieson found Dario Vidosic. Bruno Fornaroli got a decisive touch on the cross after the ball bobbled off Jets centre back Nikolai Topor Stanley into his path, striking the defender again before rolling past Jack Duncan in the Newcastle goal.

The Jets responded in the only way they know – by getting on the front foot, Riley McGree blasting over shortly after the restart. 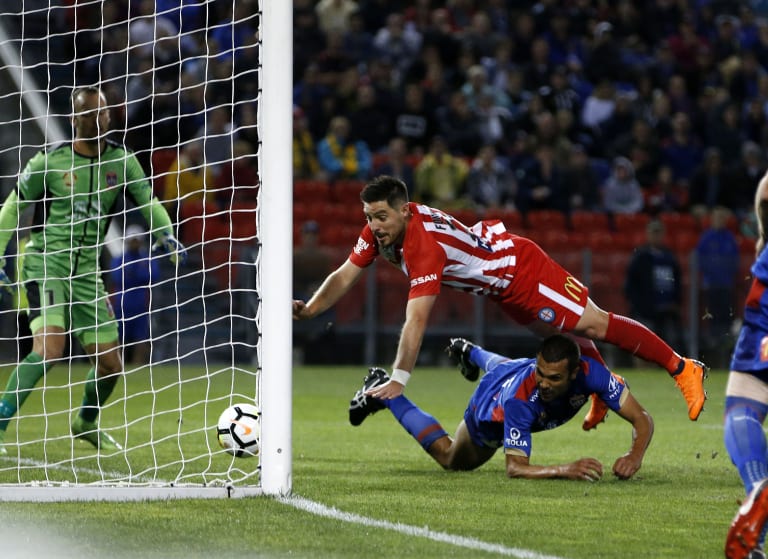 Yet they could have been two down in the 21st minute after the VAR adjudicators took a long, hard look at an incident in which Arzani appeared to have been tripped in the penalty area by John Koutroumbis.

After deliberation they ruled it was not a spot kick, and McDonald Jones Stadium breathed a sigh of relief.

The Jets were to suffer more problems just a few minutes later when Duncan went down in his area after straining his thigh as he played a long clearance out from goal.

He tried to soldier on for another couple of minutes, but it became clear he could not continue, so midway through the first half Merrick was forced to use one of his substitutes up by bringing on back up goalkeeper Glen Moss in Duncan's place.

Petratos caused consternation with another free kick, and then got round Nathaniel Atkinson to send in another cross which Hoffman could not connect with.

Vargas eventually got a yellow card for crude challenge on Stefan Mauk, before Petratos linked with McGree and Koutroumbis, the latter firing too high.

Petratos almost got his side level in the dying minutes of the first half, his free kick from more than 30 metres out just skimming Bouzanis' bar. 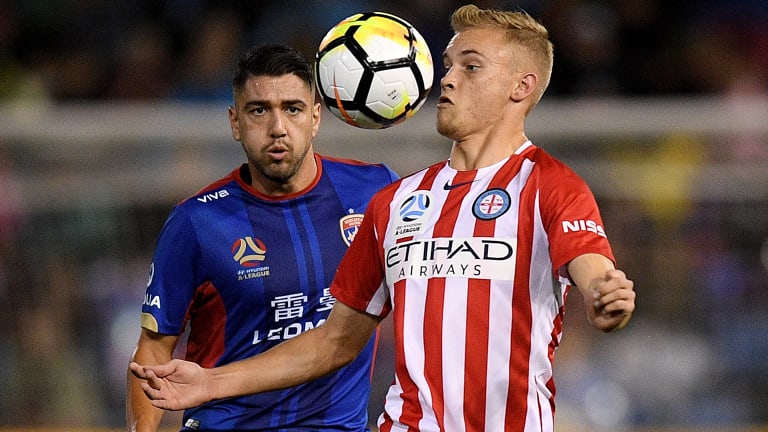 The Jets got the equaliser their pressure demanded 12 minutes into the second half, and what an astonishing goal it was.

Newcastle worked the ball beautifully around the City goal and McGree found himself in front of a Vargas chip just inside the penalty area: with no time to turn he instinctively went for a back heel volley which sped past a stunned Boutzianis.

Roy O'Donovan, who had missed a chance early in the second half, then blazed over when through as the Jets seized the momentum.

Newcastle got their noses in front with 15 minutes remaining and it was Hoffman, who atoned for those earlier misses, who slammed home after Malik had failed to control a Champness cross in his own area. That was to prove enough.