Kangas surge into top four after holding off Hawks 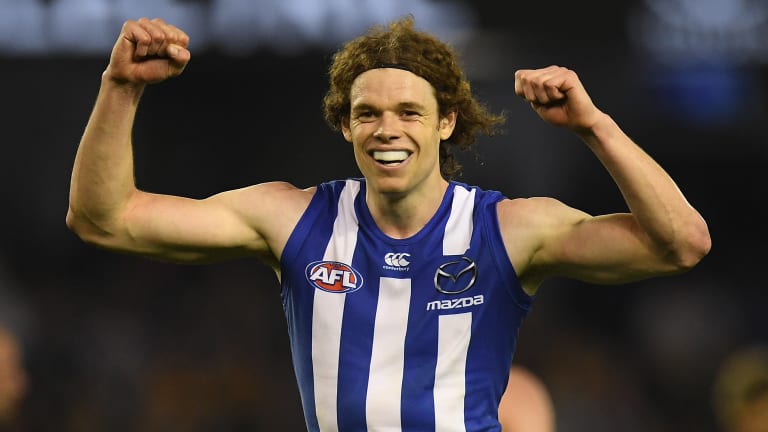 But on Sunday at Etihad Stadium the notionally rebuilding Roos held off a Hawthorn side that notwithstanding injuries entered the match looking every bit a top four contender, but about whom afterwards it was hard to know just what to make.

The same can be said of North too. The Roos’ win was their third in five games, moving them into the top four, where they will in all likelihood remain at the end of the round.

So how far can they go in 2018? Well let’s look at what they offered on Sunday. In attack the Roos are multi-dimensional. It helps in no small amount that one of those dimensions is Ben Brown, who moved into the Coleman medal lead and is staking a claim to be one of the best value draft picks of all time.

The Tasmanian is next to impossible to stop when on song, such is his leap and reach, not to mention his pinpoint accuracy. He made the Hawks’ backline, a unit that had so terrifically suffocated Melbourne seven days earlier, look all at sea. 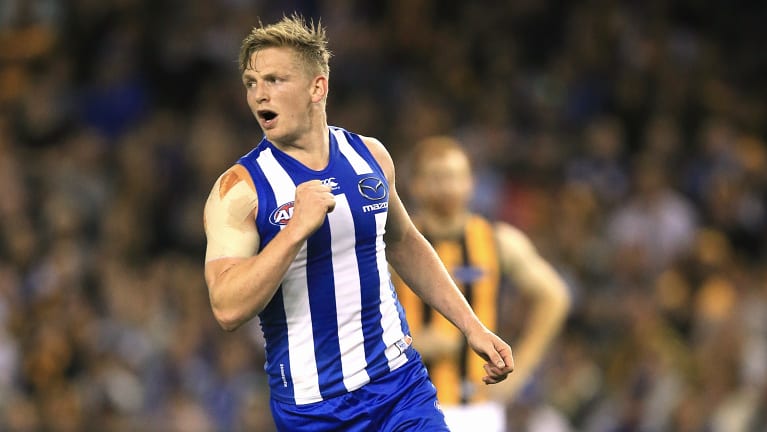 A player of Brown’s quality has a compounding effect too. The big man created chaos, typified by a first quarter effort in which with Hawk eyes stationed on the spearhead he mis-read the flight of the ball only for the Sherrin to land in the lap of Jack Ziebell.

Speaking of the North skipper, his move into attack has been one of this year’s positional change success stories. Not only does he have a knack of finding the goal, so too is he a fierce tackler, helping lock the ball inside the Roos’ 50 where others can capitalise as well. 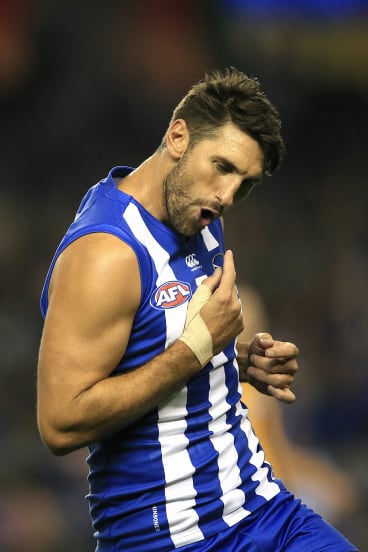 Smokin’: Jarrod Waite after kicking a major for the Kangas.

People laughed in mid-February when Brad Scott said Jarrad Waite’s best football was in front of him. The North coach might not have been that far from the mark. Waite repeatedly outmarked his opponents on Sunday and had he been a bit neater with his finishing the veteran would have had a day out.

Ziebell’s grunt isn’t particularly missed in the midfield. Ben Cunnington keeps putting his head over the ball and he had plenty of assistance from Trent Dumont, at least in the first. Together they helped North to healthy clearance advantage, laying the platform for Ryan Clarke, Jamie Macmillan, Shaun Atley and Shaun Higgins, until Higgins was concussed in the third term.

They also have a man who is reviving the role of tagger. Ben Jacobs not only curbed the influence of Tom Mitchell, he also won plenty of the ball himself.

Not only do the Roos have a star up forward, they also have a gun in the backline. Robbie Tarrant did another brilliant job of mopping up, while his fellow Scott Thompson remains a force,absorbing pressure and hitting targets aplenty of Sunday.

So where are the limitations? Well consistency, an issue for most sides, was a problem for the Roos as well. The likes of of Marley Williams, Jed Anderson, Billy Hartung and Jy Simpkin all drifted out of the game in the third quarter as Alastair Clarkson’s Hawks veered back into the picture.

Isaac Smith ran hard and got busy, James Sicily was influential down back, while Luke Breust and Liam Shiels pegged back the difference.

North’s cause wasn’t helped by the loss of Higgins and Ed Vickers-Willis in almost simultaneous head collisions midway through the third term, leaving them desperately short of run. But nor did they do themselves many favours in the second half. A final term Hartung turnover deep in defence springs to mind.

As such the Roos led by 57 points at half-time but it wasn’t until Cameron Zurhaar goaled just before time on of the final quarter that North had the game won.