Home » Sport » Landing the jackpot: Raucous celebrations as Cardiff head to the EPL

Landing the jackpot: Raucous celebrations as Cardiff head to the EPL

There can never have been a noise like it in Cardiff. The guttural roar after 90 minutes that greeted news Birmingham had scored a third against Fulham, a strike which finally lifted the doubt and confirmed Cardiff City's elevation to the Premier League, was extraordinary.

The news sparked riotous celebrations, with hundreds of supporters pouring on to the pitch before the final whistle had sounded. 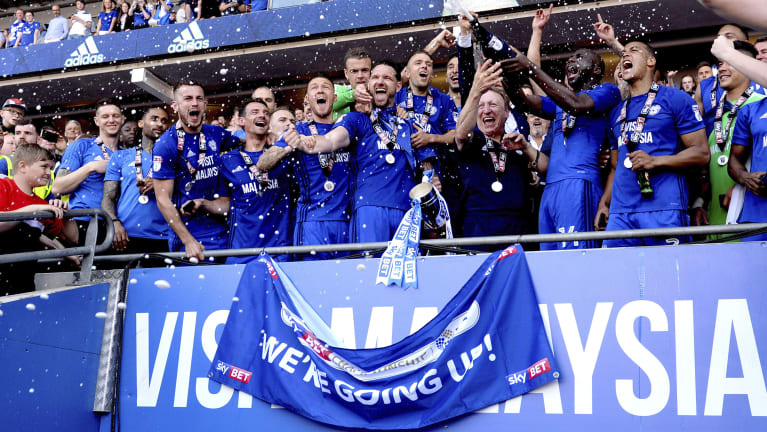 "The Blues are going up," was the delighted refrain from the 32,478 crowd, a record at this stadium. Never mind that their own team had been frustrated by a disciplined, determined Reading side in the pursuit of a goal to mark the moment, the estimated £180 million reward of promotion was theirs.

No wonder, in the directors' box, club owner Vincent Tan, his blue shirt tucked into his belt, wore the grin of someone who had just won the lottery.

And the man who had bought him the winning ticket watched from the edge of his technical area, his hands behind his back, a quiet grin of satisfaction spreading across his face as the last few seconds were played out in a cauldron of excited expectation.

After admitting he had accrued about three hours' sleep in the past week, how the veteran irritant was loving his moment, even as he made a dash for the tunnel at the end as the pitch was filled with thousands of boisterous supporters, their delight soundtracked by fireworks crackling from the roof.

"It's my greatest achievement getting this group of lads promoted," Warnock insisted, the delight sparking in his eyes. "The best one by a mile. If you knew what I've had to do off the field as well as on the field, you'd understand."

Indeed, what a turnaround Warnock has achieved in his 18 month at Cardiff. As the pitch was filled with raucous celebration, it was impossible to recognise the place from the angry, dislocated, riven bed of infighting that had greeted the red-shirted disaster of relegation to the Championship in 2014. The success he wrought has delivered an extraordinary unity of purpose, exemplified in the bouncing backing given by the denizens of the packed USW Stand, on their feet in cheery delirium for 90 minutes.

"The fantastic thing is the fans are proud of being a Bluebird again, everybody wants to come and support the club," said Warnock. "I know we're not easy on the eye, but I'm really proud of building a team capable of ruffling a few feathers."

Never mind that this was a game destined to live about as long in the memory as a bad night out in Newport, a goalless stalemate was of no lasting significance. Chances were few, nerves restricting imagination.

But then, under Warnock, Cardiff have advanced without doing anything fancy. His is a side who deliver performances appropriate to a freezing wet Tuesday in Stoke, rather than a glorious spring afternoon. Big, aggressive, muscular, with Sean Morrison's long throw the weapon of choice, Premier League teams should prepare for a serious physical examination.

"Yeah, it's going to be hard. We'll be odds-on to go down," said Warnock. "Hey ho. Why worry, we've got there. You're going to enjoy it. I'm looking forward to it. And if it goes pear-shaped I'll just leave."

Punctuated by huge cheers rippling round the stadium to greet each of Birmingham's goals, Cardiff's players became increasingly aware that a draw would be enough. And, frankly, Reading, their own relegation plight eased by news from elsewhere, were in no mood to press for victory.

"I must admit, I kissed the lad who told me at half-time Fulham were two down," smiled Warnock, before heading off to the club's awards night. "It's important you enjoy it. And, by God, I'm going to enjoy it."