ARCADIA, Calif. — The free coffee was flowing, the horses were already into their morning workouts, and the sun was not yet up over the San Gabriel Mountains. These mornings at Clocker’s Corner, a breakfast spot for horsemen and other hangers-on at the storied Santa Anita Park, are usually filled with gossip and banter.

On Friday, though, there was only apprehension. A day earlier, the owners of the track announced strict new rules for their sport — no race-day drugs, no use of whips — in response to a spate of horse deaths, 22 since the end of December.

The new rules have not only put trainers and owners at the track on notice, but also convulsed a multibillion-dollar industry from Kentucky to New York that has resisted meaningful oversight for decades. The stakes are high, especially in California, where the animal rights movement is particularly strong, and all it takes is 600,000 signatures on a petition to prompt a ballot initiative on whether horse racing should even exist here.

Even more harrowing is the fact that Los Angeles County district attorney’s office investigators are looking into deaths at the behest of People for the Ethical Treatment of Animals.

“This could be the end in California,” said Gary Stute, 62, a trainer like his father before him and stalwart of the racing circuit.

He added: “I love the horses. I’m closer to these horses than my sisters.”

While racetrack owners and leaders of industry groups acknowledged Friday that horse racing was at a crucial moment, no one was in a hurry to join the Stronach Group, the company that owns Santa Anita, Golden Gate Fields in San Francisco and many more, in a set of safety improvements that would put American horse racing in line with the rest of the world.

Many horse trainers across the nation say medication is aimed at keeping athletes healthy and competing, whether they are human or equine, and the trainers do not want to surrender rights to keep athletes fit. They see the whip as a nonissue because, they say, it is rarely used, does not inflict much pain and helps jockeys control horses more than it makes them run faster. 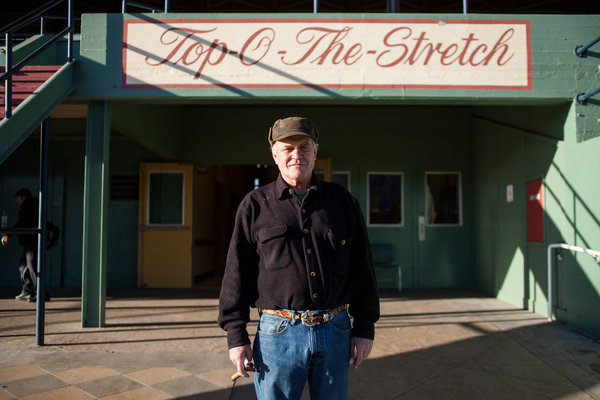 Kevin Flannery, the president of Churchill Downs in Louisville, where the Kentucky Derby will be held in eight weeks, said safety was paramount but did not indicate any changes were in the offing.

“We’re committed to collaborating with other industry leaders to raise the bar in making racing safer,” he said in a statement.

David O’Rourke, the interim chief executive of the New York Racing Association, said in a statement that “there is always more work to be done, and we are constantly striving to enhance safety protocols in the course of active dialogue with independent experts, veterinarians and scientists in relevant fields.”

Five horses have died at Aqueduct since Jan. 1, but the racing association has had spikes in fatalities similar to Santa Anita’s: at Aqueduct in 2012 and at Saratoga in 2016.

“There has to be a discussion and a plan,” said Dr. Mary Scollay, the equine medical director for the Kentucky Horse Racing Association.

There is a growing number of owners and trainers, however, who say that fatalities at Santa Anita and the attention they have attracted are an opportunity to save the sport from itself.

On Thursday, the Horseracing Integrity Act of 2019 was introduced in Congress by Representatives Paul Tonko, Democrat of New York, and Andy Barr, Republican of Kentucky. The bill would create a private, independent authority responsible for developing and administering a nationwide antidoping and medication control program.

Barry Irwin, a prominent owner and advocate for drug-free racing, said the rule changes were put in place to deflect attention from other problems but would prove beneficial.

“Whether they did it for wrong and right reasons, I hope people get behind it because it is what the sport needs,” Irwin said.

Here in Arcadia, however, in a place that feels forever oriented toward its past, the policies going forward are not popular.

This was once the center of horse racing, and Santa Anita Park, known as the Great Race Place — and home to Seabiscuit, a legacy the track to this day uses in its marketing — has been central to the culture of Southern California. It opened on Christmas Day in 1934, at the height of the Great Depression.

“We preceded every sport in L.A.,” said Mike Willman, who has worked at the track since 1985 and is now the director of publicity. “We preceded the Lakers, the Dodgers, the Rams, the Angels. You had athletes who would come, celebrities.”

Stute says he does not like the new rules — which he called “so extreme” — but is willing to go along with them if they help save the sport.

“I understand,” he said. “I think they are trying to cover every base for the safety of the horse.”

In a meeting for trainers and owners on Friday, there was talk of boycotting the track though it is unclear when — or if — it may reopen for the remaining racing dates. The cause of all the horses deaths has not been determined by investigators, though many trainers blamed an abundance of rain, which unsettled the track, causing horses to break down — which required them to be euthanized.

Derek Lawson, an agent who represents the French jockey Flavien Prat, pushed back against what he believed to be a false narrative — that horses were mysteriously dying at Santa Anita.

“It’s a different time,” he said. “When you have organizations pushing to abolish horse racing, they don’t realize how many people the industry employs.”

Some horsemen, however, say there is a better version of the sport waiting if only the industry would embrace change.

“I am quite adamant about America having no drug, no abusive practices racing,” said Neil Drysdale, a Hall of Famer trainer who won the 2000 Kentucky Derby with Fusaichi Pegasus. “We can be better.”