Losing the Lottery Might Be the Least of the Knicks’ Problems

Just when it appeared that Patrick Ewing would finally win the big one for the Knicks, when you could even conjure up an image of his honorary participation in a championship ring ceremony not too far down the road, the lottery gods chortled and said, “Step aside, Big Fella, you had your turn 34 years ago.”

Nobody kidded themselves about the Knicks’ statistical chances of landing the No. 1 pick — to be used on Zion Williamson, the would-be generational talent — before Tuesday night’s draft lottery. But what transpired during the stage show in Chicago once the Knicks had reached the final round of four felt like a kick in the groin, a blown lead late in the fourth quarter. The promise of Zion was summarily ejected from Madison Square Garden like a taunting fan in the face of its owner, James L. Dolan.

With a 14 percent chance, the Knicks were suddenly the heavy favorite against the competing odds of New Orleans and Memphis at 6 percent and Team LA-Bron, otherwise known as the Lakers, at 2 percent.

Finishing third, behind the Pelicans and the Grizzlies, was not a disaster — and one day it may even be considered a blessing. But not this day, a deflating reminder of how long it has been since the Garden, the self-proclaimed World’s Most Famous Arena, actually was the center of the N.B.A. universe.

The draft experts insist the Knicks are still well positioned with the third pick because there are three prospects — Williamson; R.J. Barrett, his running mate at Duke; and Murray State point guard Ja Morant — who rate far above everyone else. 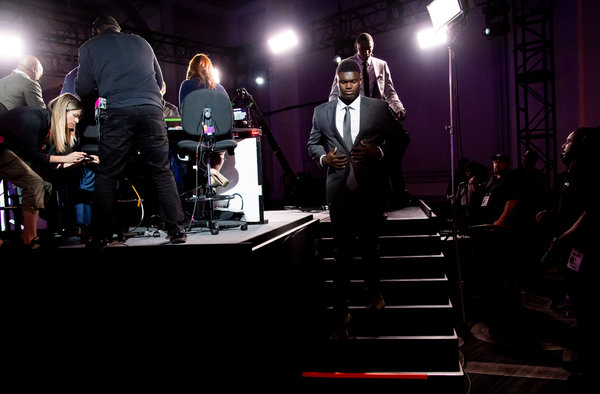 Of course, these experts artificially manufacture a cutoff line for those who “can’t miss” every year. Almost always it doesn’t work out that way, as Kawhi Leonard (No. 15 in 2011), Giannis Antetokounmpo (No. 15 in 2013) and Donovan Mitchell (No. 13 in 2017), among many others, would argue.

Heartening are two recent No. 3 selections: Dallas’s Luka Doncic, this season’s likely rookie of the year, and Boston’s Jayson Tatum, drafted from Duke in 2017. Disheartening is the specter of Jahlil Okafor, another Dukie, who would have been a Knick had Philadelphia not spared then-president Phil Jackson from drafting him fourth (instead of Kristaps Porzingis) in 2015.

Projections are fun. Knowledge requires patience. Nothing definitive can be said about this class — Williamson included — until sometime next season at the earliest. But for the moment, the Knicks’ failure to land the big prize at least momentarily dulls the sheen of their rising superpower status.

[The legend of Zion Williamson? That started long before he got to Duke.]

Without Williamson as a centerpiece, they may be hard-pressed to assemble a package that would make them serious contenders for a deal with New Orleans for Anthony Davis, if that was even part of the Knicks’ plan. But their lack of appealing assets raises another compelling question: what, exactly, will they be selling Kevin Durant and other impending free agents besides a famously tax-abated building when the season of shameless groveling begins in July?

You watched the Golden State Warriors share the ball so selflessly while beating Portland in Game 1 of the Western Conference finals after the lottery game show and wondered: Durant is really going to leave all that precision to come run with Allonzo Trier?

You watched the Warriors harass the Blazers’ often-indomitable Damian Lillard into a 4-for-12 shooting night with seven turnovers, and mused: Durant wants to fall back on defense with the likes of Dennis Smith Jr. and Kevin Knox?

You see how many contributors, in addition to the so-called max (salary) players, it takes to play deep into spring, and you have to stretch the imagination to name just one on the Knicks’ current roster who could honestly be considered a solid rotation guy on a serious playoff contender.

Maybe the lure of the Garden and Midtown Manhattan will be enough for Durant to try what LeBron James never considered — the opportunity to resurrect N.B.A. basketball just off Broadway. But it also stands to reason that Durant, even in tandem with Kyrie Irving, is too smart to take that plunge without at least doing his homework, and asking hard questions of Dolan himself.

If that is the case, then Chairman James will have some explaining to do, given the treatment of aging Knicks stars not only during his volatile era but going way back across the decades.

Rare has been the Knicks luminary who left the Garden without some rancor. Walt Frazier was traded to Cleveland. Willis Reed was canned as coach 14 games into his second season. Bob McAdoo was traded in the dead in the night. Earl Monroe was unceremoniously dropped. Bernard King was cut after diligently rehabbing his surgically repaired knee. Ewing asked to be dealt and, presumably as payback, was never invited back — not until the Knicks needed him Tuesday night as they tried to restage the 1985 inaugural lottery that landed him in New York.

A forgiving soul, apparently, Ewing, in a Knicks-blue suit, played along with the endless network hyping of the potential Knicks-Zion marriage. It was shameless and patently unfair to the other teams that tanked for the occasion and especially to Williamson, 18, whose impressionable head was prematurely filled with visions of Big Apple grandeur.

The only time he didn’t smile on camera was when he learned where he had landed. Someone might want to inform him that he probably lucked out. The TV networks are sure to follow him to New Orleans the way they chased after LeBron in Cleveland. Nor is being ordained a Knicks savior the world’s most desirable appointment. For the most recent historical example, call Porzingis in Latvia and ask how it worked out for him.

An earlier version of this article misspelled the given name of a Knicks player. He is Allonzo Trier, not Alonzo.